READ THIS NEXT
Black consumers are group most swayed by brand values and diversity practices, study finds
Credit: Daily Mail/YouTube

Kathy Griffin's latest commercial endorsement deal lasted less than three weeks. She's been dumped by Squatty Potty thanks to publication of a photo showing her holding a wax likeness of a severed, bloody head of President Donald Trump.

The image was posted in a video shown on the website of celebrity photographer Tyler Shields on Tuesday. After it provoked the predictable outrage, Squatty Potty issued a statement late Tuesday that advertising featuring Griffin that went up earlier this month has been suspended.

"We were shocked and disappointed to learn about the image Ms. Griffin shared today," said Squatty Potty CEO Bobby Edwards in a statement. "It was deeply inappropriate and runs contrary to the core values our company stands for. In response, Squatty Potty has suspended its ad campaign featuring Ms. Griffin. We have acted swiftly and decisively to demonstrate our commitment to a culture of decency, civility and tolerance."

CNN followed a few hours later with a statement of its own:

CNN has terminated our agreement with Kathy Griffin to appear on our New Year's Eve program.

It had previously expressed strong dismay. "We found what she did disgusting and offensive," a CNN representative said Tuesday. "We are pleased to see she has apologized and asked that the photos be taken down. We are evaluating New Year's Eve and have made no decisions at this point."

For the record, I am appalled by the photo shoot Kathy Griffin took part in. It is clearly disgusting and completely inappropriate. 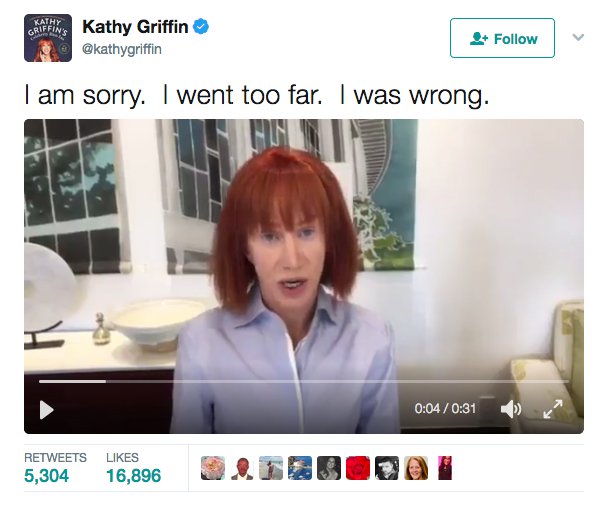 "The image was too disturbing," Griffin said. "It offends people. It wasn't funny. I get it." A spokesman didn't immediately respond to an e-mail request for comment regarding Squatty Potty's decision.

Shortly after the Griffin lost her endorsement deal, she began losing gigs, too. Last night Route 66 Casino in Albuquerque tweeted that her upcoming July gig has been canceled.

The July 22nd performance by Kathy Griffin has been cancelled.

In an interview with Ad Age earlier this month, the controversial comedian acknowledged that her commercial endorsement deals, which have included Target and Kotex, have dried up.

"It's like the Squatty Potty is the final bachelor, and after fighting with all the bitches in the house I finally end up with the rose."

~ ~ ~
NOTE: This article has been updated to include CNN's termination of its deal with Kathy Griffin, which came after the original post.