Just because you shared a photo on Instragram of the trendy omelet soufflé you ate at brunch doesn't mean you'd want to share it in real life.

That's the message Kellogg brand Eggo is getting at with its own breakfast food as it brings back its famous "L'Eggo My Eggo" campaign this week with a modern spin – even though we "share" nearly everything today, Eggo waffles are the one thing you still want to keep for yourself.

"What is really different about this campaign is that we're taking a tagline from the 1970's and making it relevant today," said Anne Marie Suarez-Davis, VP-frozen foods marketing and innovation at Kellogg Co.

The new campaign is a contemporary twist on the original "L'Eggo My Eggo" campaign that began running while "The Brady Bunch" was in primetime in 1972 and remained central to the brand's advertising until 2008. Eggo began to shift away from the tagline the following year, switching to a campaign called "My Way," but "L'Eggo My Eggo" was still used at the end of spots. Then, in 2011, Eggo completely broke away from the signature campaign, substituting "Simply Delicious" as the tagline. 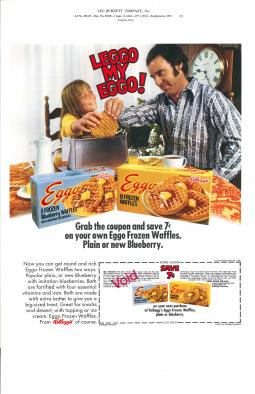 But last year, "L'Eggo My Eggo" began inching its way back to the spotlight, being used in commericals but not as the focal point. It makes a full-blown return this week when Eggo releases online videos that bring the well-known phrase back as the star.

Publicis' Leo Burnett has been Eggo's creative agency since the start and remains so today. Those videos are a precursor to a full campaign with the line that breaks in January. The push will include TV, online, and social media elements for the general and Hispanic markets.

"This is very much an integrated approach, with a heavy online media and social-media component," said Ms. Suarez-Davis. A U.S. Hispanic version of the campaign is currently in the works to run on broadcast TV for the two weeks before Christmas this year.

The waffle brand recently rolled out a line of breakfast sandwiches as well. Eggo is the dominant player in frozen waffles with roughly a 60% market share.

Minda Smiley
View all articles by this author