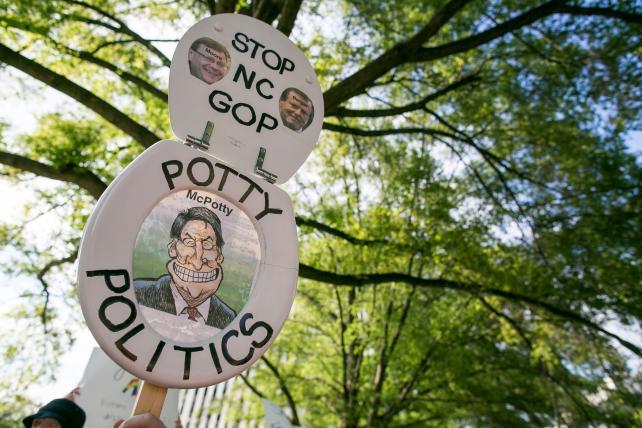 The NBA is moving the the 2017 All-Star Game in February from Charlotte because of its objection to North Carolina House Bill 2, also known as the Bathroom Bill.
Credit: Al Drago/CQ Roll Call/Getty Images

The National Basketball Association today said it would pull the 2017 All-Star game from North Carolina, citing the state's controversial anti-LGBT law. And sponsors -- which faced the prospect of dealing with protests -- are big winners in the decision, said sports marketing experts.

The league made the move official Thursday afternoon, saying in a statement that it is seeking a new location for the game with hopes of returning to Charlotte in 2019 "provided there is an appropriate resolution to this matter."

For sponsors "this is a net positive because it takes away the controversy," said Jim Andrews, senior VP-marketing for sponsorship consultancy IEG. "They will now not be the center of protests or anything like that if the All Star Game was to be in Charlotte," he added.

"Big kudos for [NBA Commissioner] Adam Silver and the league for being able to actually pull this off in short order," said Larry Mann, executive VP at Revolution, a sports marketing agency. "If you just look at it from the brand's perspective, there is a huge sigh of relief."

PepsiCo, which last year signed a major sponsorship deal with the league, issued the following statement: "We support the NBA's decision today because it is firmly based on the same core values that we hold true at PepsiCo. We have long embraced diversity and practiced inclusion because we fundamentally believe that doing so makes us a better company and a better country."

"We share the NBA's commitment to diversity and inclusion and respect the league's decision," said a U.S. spokeswoman for Anheuser-Busch InBev, which late last year extended its NBA sponsorship for four years.

The NBA in its statement said: "We have been guided in these discussions by the long-standing core values of our league. These include not only diversity, inclusion, fairness and respect for others but also the willingness to listen and consider opposing points of view." The NBA added that "while we recognize that the NBA cannot choose the law in every city, state, and country in which we do business, we do not believe we can successfully host our All-Star festivities in Charlotte in the climate created by HB2."

The law -- which has been widely criticized by LGBT rights advocates -- includes a provision that people must use public bathrooms that correspond to the gender on their birth certificates.

The NBA's decision drew praise from Brian Ellner, general manager for corporate and public affairs at Edelman. Mr. Ellner -- who in 2011 led the winning campaign for marriage equality in New York -- said the league's move is "one of the most significant acts of corporate allyship we've ever seen. I also think, frankly, it was a smart move for the [NBA] brand given young people's views on LGBT equality."

The NBA stated that it would make an announcement on the new location in the coming weeks. Yahoo Sports' The Vertical reported that New Orleans was being considered as a replacement site.

Mr. Mann said the decision comes with some side effects, such as delivering the news to NBA legend Michael Jordan, who is chairman of the Charlotte Hornets. "It can't be easy for the league to make that call and tell him we pulled the All Star Game," Mr. Mann said.

The Hornets and Mr. Jordan issued the following statement: "We understand the NBA's decision and the challenges around holding the NBA All-Star Game in Charlotte this season. There was an exhaustive effort from all parties to keep the event in Charlotte, and we are disappointed we were unable to do so. With that said, we are pleased that the NBA opened the door for Charlotte to host All-Star Weekend again as soon as an opportunity was available in 2019. We want to thank the City of Charlotte and the business community for their backing throughout this entire process, starting with the initial bid. We are confident that they will be just as supportive and enthusiastic for the 2019 NBA All-Star Game."

North Carolina Governor Pat McCrory criticized the NBA's move in a statement. "The sports and entertainment elite, Attorney General Roy Cooper and the liberal media have for months misrepresented our laws and maligned the people of North Carolina simply because most people believe boys and girls should be able to use school bathrooms, locker rooms and showers without the opposite sex present," he stated. "American families should be on notice that the selective corporate elite are imposing their political will on communities in which they do business, thus bypassing the democratic and legal process."