According to a new report, the renewal of the Pittsburgh stadium naming rights deal is ‘highly unlikely.’
READ THIS NEXT
Hershey is ready to talk about Halloween. Yes, it’s only July 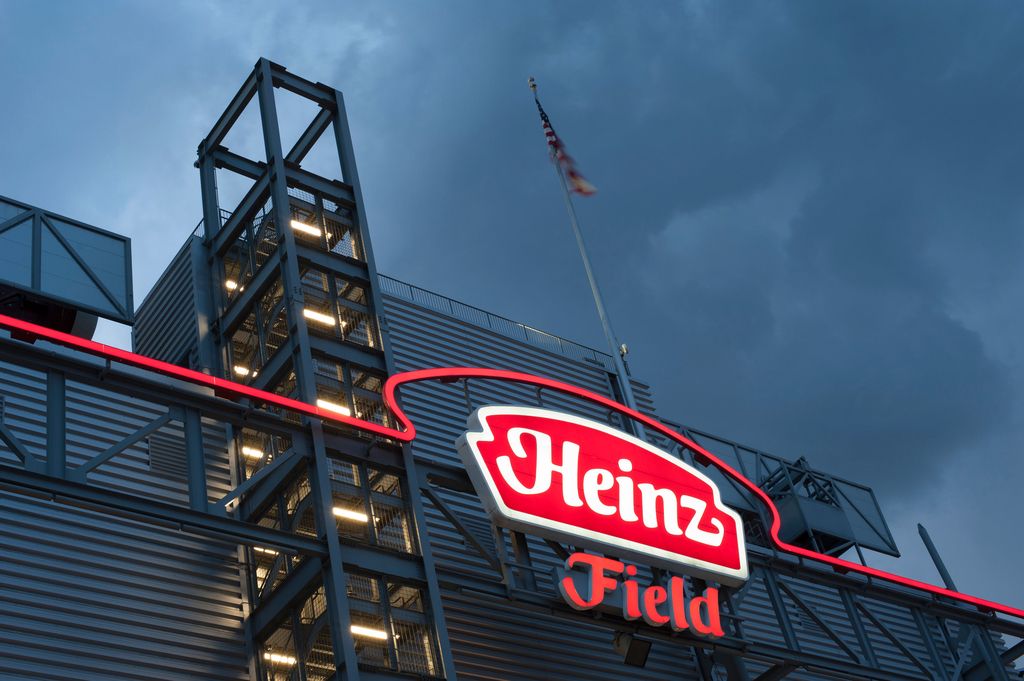 Heinz Field in Pittsburgh is home to the Steelers.

How many Steelers linemen would it take to carry two 35-feet-by-9-feet Heinz ketchup bottles out of Heinz Field? The home of the Pittsburgh Steelers and the University of Pittsburgh football teams has been called Heinz Field since it opened in 2001. Now, as Kraft Heinz tries to recover after a brutal few months, Street & Smith’s Sports Business Journal reports it may drop the Heinz Field deal.

The report calls a renewal “highly unlikely” and says sources suggest Kraft Heinz might even walk away before its pact expires in 2021. Kraft Heinz, which has had offices in both Chicago and Pittsburgh since its 2015 merger, didn’t exactly confirm its plans, but clearly, it’s looking for ways to cut costs after weak results, massive write-downs, the appointment of a new CEO and the departure of its chief marketing officer. “Kraft Heinz and the Pittsburgh Steelers have enjoyed a long and beneficial relationship over the past 18 years. Both organizations are committed to the partnership for at least the next two seasons, and we look forward to ongoing discussions related to the future,” Kraft Heinz spokesman Michael Mullen said in a statement. So, you might say the company is weighing its options. As for those bottles, they weigh about 16,000 pounds combined, roughly as much as 53 300-pound NFL linemen, according to the stadium. (For more condiment news, keep reading below.)

Oprah’s latest
There is one deal Kraft Heinz is eager to promote: its ongoing relationship with Oprah Winfrey. On Wednesday, Kraft Heinz announced the addition of frozen skillets to the O, That’s Good! prepared food line that’s been around since 2017 and already features soups, sides and pizzas. The line sneaks veggies into traditional comfort foods. In the chicken alfredo skillet, for instance, some of the cream that’s usually in the dish was replaced with pureed cauliflower. New ads including a 15-second spot featuring Winfrey, will come from creative agency Reid Miller Creative Group.

School daze
On the heels of Amazon’s back-to-school campaign earlier this week, the Gap—long a destination for fall fashion for students, which was a fact highlighted in the recent season of Netflix’s ’80s hit Stranger Things—is out with its own push. The “It’s Our Denim Now” work is the retailer’s first from agency Johannes Leonardo. Like many other Gap campaigns, it uses nostalgia marketing by delving into the brand’s heritage, showcasing popular styles from the ’70s, ’80s and ’90s with modern twists. This is also the first major campaign from new CMO Alegra O’Hare, who joined the San Francisco-based retailer from Adidas earlier this year. The work will run on Gap.com and across its social channels. Creativity has more on the campaign.

Athleta hearts Allyson
Speaking of Gap, the brand’s sister label Athleta announced its first sponsored athlete, inking a deal with track and field racer Allyson Felix, while taking a subtle dig at Nike in the process. To announce the pairing, the brand published a letter to Felix in the New York Times Tuesday. “As women and athletes, we experience the joys and challenges that come from being both. It’s why we promise to support you—as an athlete, a mother, an activist—as you continue to break records, break barriers and break the silence,” read the letter, which has since been posted on Athleta’s site. Felix spoke out earlier this year about Nike; she criticized the brand for its lack of support last year when she became a mother.

The house is for sale—and so is what’s inside
Real estate company Compass is debuting its first “shoppable showroom” at a Hamptons beach house this summer. The firm tapped design firm Domino and Visualxchange, which has an app called Stage & Shop, on the offering. Prospective buyers can use QR codes to scan homewares from brands such as Room and Board and place an order. A spokesman for Compass noted that the initiative is part of a growing trend in real estate as consumers expect more integrated experiences with brands.

‘Goat’ in a box
Online grocer Peapod is now featuring meal kits made in a partnership with Chicago restaurateur Stephanie Izard, the chef behind several restaurants including Girl & the Goat. The first meals include Yucatán fish tacos by This Little Goat and grilled Belize chicken sandwich by This Little Goat. Along with the kits, customers in certain markets can buy her line of This Little Goat sauces and spices.

One scoop of mustard, please
French’s and Coolhaus have teamed up to concoct French’s Mustard Ice Cream just in time for National Mustard Day, which in case it isn’t marked in yellow on your calendar falls on Aug. 3. For a few days in early August, the Coolhaus shop in Culver City will give it away, and a French’s ice cream truck will scoop it out in New York and the Hamptons. There’s also an online recipe from French’s parent McCormick featuring the mustard and some of its other products. This is one flavor trend we don’t think is going to catch on (but we haven’t tried it, yet, so who knows). 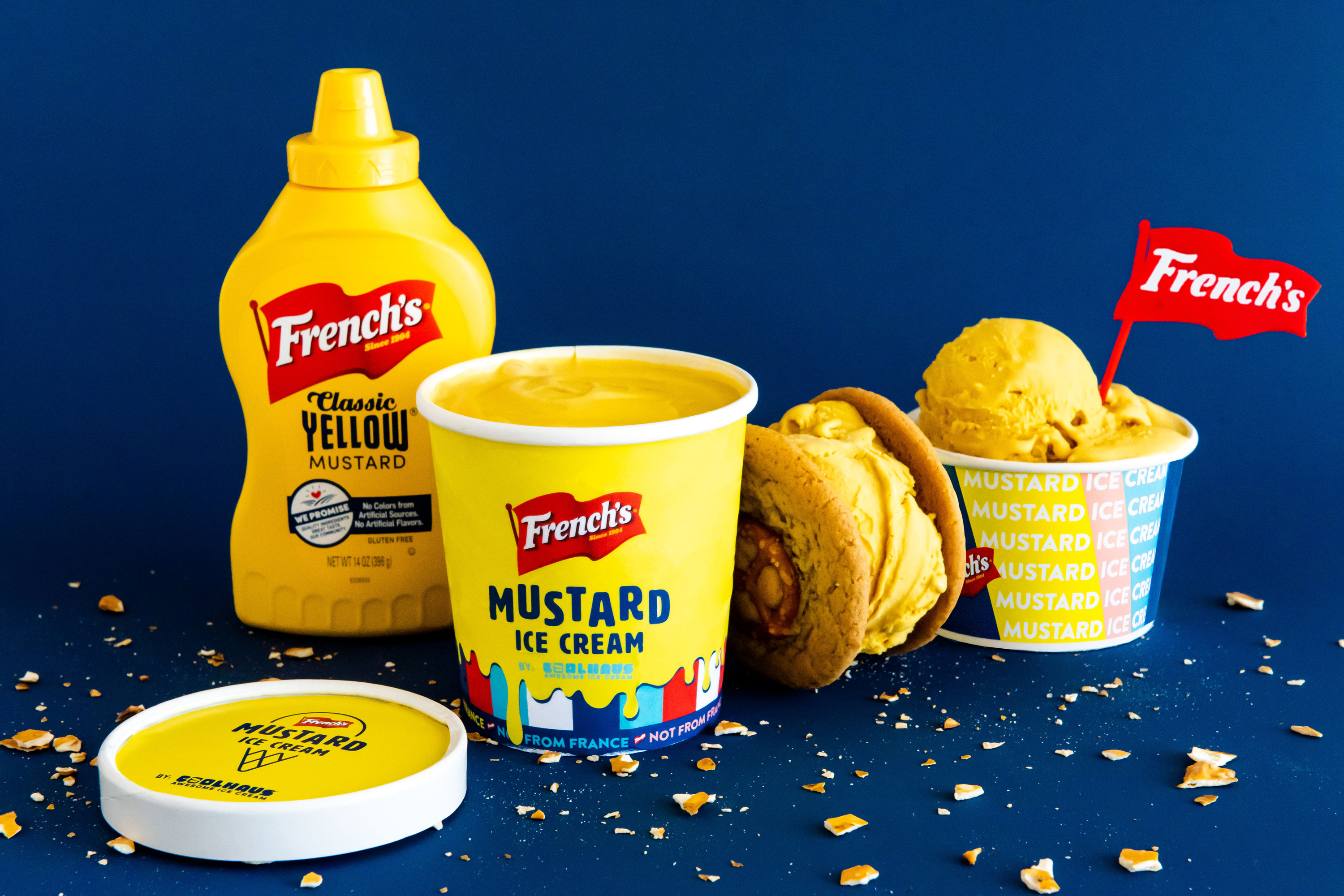 Would you buy this?
Kellogg’s Baby Shark cereal is being sold exclusively at Sam’s Club starting in August before heading (or maybe swimming?) to sibling chain Walmart in late September. The “berry fin-tastic” flavored rings and marshmallows are actually not shark-shaped. Here’s guessing people will hum along anyway. 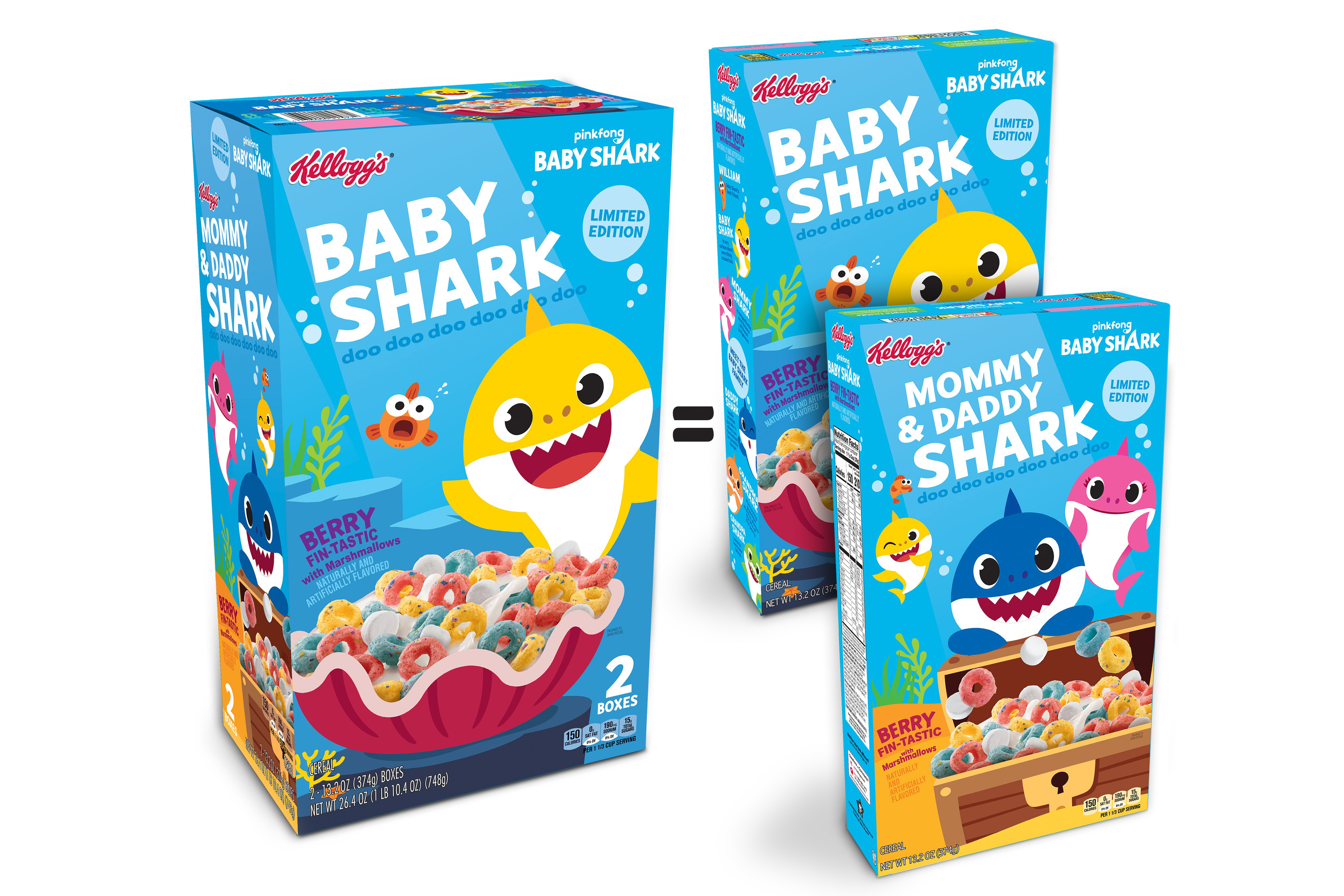 Already got that on lock, stay in your lane #rockymountainrunoff pic.twitter.com/OcA3BKY5XC

MillerCoors parent company Molson Coors named Gavin Hattersley as its next CEO, replacing the retiring Mark Hunter. Hattersley is currently CEO of MillerCoors, which has yet to name his replacement.