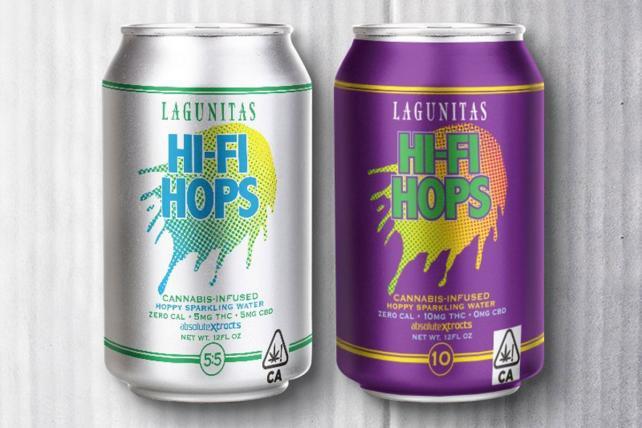 This drink will get you high, just don't call it a beer: Craft brewer Lagunitas, a unit of Heineken, said Tuesday that it will start selling Hi-Fi Hops in California, an "IPA-inspired" sparkling water infused with THC.

THC stands for tetrahydrocannabidinol, the ingredient in cannabis that makes you high. California legalized recreational marijuana as of Jan. 1, clearing the way for psychedelic drinks like this one. The new entry from Lagunitas, one of the largest craft brewers in the country, signals that pot-infused drinks could be poised to enter the mainstream.

Other larger brewers have begun making moves to capitalize on the cannabis craze, but none have taken the leap to sell something with the narcotic properties of Hi-Fi. Corona parent Constellation Brands late last year bought a stake in Canadian marijuana company Canopy Growth Corp. and signaled that it would develop cannabis-infused beverages. But Constellation said it would not sell pot products in the U.S. unless marijuana is legalized nationally.

Hi-Fi hops will be sold at California dispensaries beginning in July. It comes in two varieties: One with 10 mg of THC and another one with 5 mg of THC and 5 mg of CBD, an extract derived from hemp plants that's emerged as a popular ingredient in all kinds of products.

Lagunitas said in a press releases that the concoction marks the "first time a major brewery has successfully and legally been represented in the THC-infused beverage space." The brewer partnered with California-based CannaCraft, which was founded in 2014 with a mission of producing cannabis medicine.

"We often dream of hops and their cannabis cousin partying together at their family reunion and wanted to bring this party to life in a drink,"Jeremy Marshall, Lagunitas Brewmaster, says in the press release. "We believe it's high-time that good beer inspired a provocative yet refreshing tasting non-alcoholic alternative – bubbly, aromatic, bitter, fruity and herbaceous with no gluten, no carbohydrates and a smidge of California sun-grown cannabis in every sip."