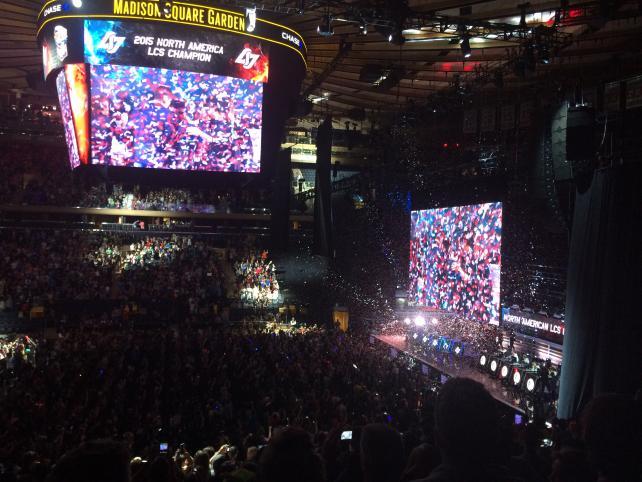 A packed crowded gave a standing ovation to team Counter Logic Gaming after its win at Madison Square Garden on Sunday.
Credit:

Hordes of gamers gathered in New York City this weekend for a professional tournament that offered further proof that e-sports, or electronic sports, which have strong followings in Asia and Europe, are taking off in the U.S.

Over the past year and a half, major marketers including Coca-Cola and P&G have been courting the space, which is still relatively untapped by non-endemic brands. But what is it really like at these events? And how can advertisers tap into them? Advertising Age embedded itself at the North American League of Legends Championship Series to find out.

Four teams faced off on Saturday and Sunday in two best-out-of-five series of League of Legends, a multiplayer online battlefield arena in which groups of five pit champions of their choosing against one another while simultaneously battling dragons and armed turrets to destroy an enemy base.

Eleven thousand fans ranging from children, teens and parents to 20- and 30-somethings piled into Madison Square Garden on each day of the sold out event, while more than one million more watched on channels like YouTube or the live streaming platform Twitch, or at viewing parties around the country hosted by Coca-Cola and other sponsors.

During Sunday's series, which was the most action-packed of the weekend, the audience roared and waved inflatable blue and red light-up sticks as the teams battled. One young girl watched the matches with her hands clasped over her mouth as underdog Counter Logic Gaming smoked Team Solomid, winning the series 3-0.

The gathering was a first for many in the crowd, who had never experienced live e-sports before. A majority of professional gaming tournaments in North America are held in West Coast cities like Los Angeles, San Francisco and Seattle where many teams and game developers are based.

"People in New York are hungry for it," said Nathan Lindberg, director of e-sports at Twitch, which broadcast the weekend's events. "There's a real desire."

Gamers Desiree Palladino, 23, and Greg Brooks, 24, from Montauk, Long Island, have attended and cosplayed at cultural gatherings like New York Comic Con before, but this was their first time at a League of Legends event. "It's drastically different," said Mr. Brooks. "You can feel the energy."

Mr. Brooks spent four weeks making armor and a sword for the event. At last year's Comic Con, he dressed as the gaming character Zed, and he and Ms. Palladino are also planning to attend this year's convention in costume.

For 26-year-old gamer Ed Fu, the event was a chance to truly experience the rush of professional gaming. "Being in a crowd of tens of thousands of people, having everyone cheering along with you and jumping up in a huge stadium like this. You can literally feel the floor shaking," Mr. Fu said. "It's amazing."

The massive event was still relatively small for an e-sports tournament. Larger global shows like Dota 2: The International and the League of Legends World Championship are becoming cultural gatherings with musical acts and other entertainment in addition to game play. Forty thousand fan attended last year's World Championship, which was held at Sangam Stadium, also known as the Seoul World Cup Stadium, and featured a performance by rock group Imagine Dragons.

League of Legends game developer Riot Games' partners with Coca-Cola, which had prime placement as the sole advertiser at the venue this weekend. The beverage giant handed out Coke e-sports cheer boards to fans before the tournament, sold collectible 32 oz. Coke branded cups featuring popular characters from the game and gave out free sodas to fans as they exited the stadium.

Other brands, including team sponsors like HTC, Geico, Logitech and Quest Nutrition, got in on the action through social media and had a presence on stage with branded players' hoodies. Quest Nutrition also hosted a fan meetup on Sunday afternoon with the previous night's victors, Team Liquid, at Washington Square Park. That event was shut down by the New York Police Department after an hour as more than 1,000 fans lined up to meet their favorite gamers at the public park.

Mr. Lindberg has since been in touch with marketers like Buffalo Wild Wings and Applebee's about hosting meet and greets of their own.

Even former pro-gamers, like Dan Dinh, the chief operating officer for Team Solomid, can draw a crowd. Fans at the arena flocked to him in between matches, eager to snap a photo with the gaming legend. Mr. Dinh oversees digital media on the team's roster of websites that primarily offer gaming guides. In the past few years, Mr. Dinh said, they've garnered attention from larger brands like Geico and are starting to turn away advertisers that don't have a large enough budget.