Levi's unveiled a new women's denim collection on Tuesday that features a range of styles for different body types, including skinny cuts, shaping styles and curvy fits. The retailer is pushing the line, which will be in stores on Wednesday, with ads featuring Alicia Keys and other female musicians.

The campaign is Levi's largest-ever effort aimed at women since it debuted its first pair of women's jeans in 1934.

"We just see so much opportunity within women's," said CMO Jennifer Sey, adding that Levi's is already the top denim retailer for women globally. "It's a huge growth opportunity, and I just feel like we've found our voice with women."

The campaign and the collection touch on the way women feel when they find the right pair of jeans, recognizing that the shopping experience is different than with men.

"It's about the confidence that women want to feel when they put on a great fitting pair of jeans," said Ms. Sey. "We're here to serve them and make them feel beautiful and amazing so they can go into the world and do great things."

As part of the effort, Levi's aims to make it easier to shop for jeans and drive traffic in stores. The retailer has revamped its in-store signage and shoppers can make one-on-one appointments with a stylist at select locations.

"It's really about getting people into stores to try on the jeans," said Ms. Sey. "A lot of women feel like jeans aren't made for their body shape, and it's a frustrating experience, so we're looking to change that with this new collection."

Levi's is also partnering with PopSugar on a location-based push and working with cinema ad distributer NCM to retarget ads to moviegoers on their mobile devices within seven days of their visit to the theater.

The broader campaign is a continuation of "Live in Levi's," created by FCB. It is inspired by customers' adventures in their Levi's and encourages others to share their own stories. Where last year's campaign focused on both men's and women's wear, the new effort is aimed squarely at women. Levi's will also run a separate push for men.

Ms. Keys stars in the launch spot, opening with the voiceover: "All women are badass." In the ad, she revisits her hometown of New York City while creating her new song, "28,000 Days." "Music brings people together and Levi's does the same thing," Ms. Keys says, suggesting that most people own a pair of the brand's jeans. The 30-second ad will run on TV, cinema and online, while a longer version of the spot will run online.

Like Ms. Keys in the video, Levi's is on a journey to return to its roots. The retailer, which dates back to 1873, started a push to recapture its place in popular culture last year with the introduction of "Live in Levi's" and the launch of Levi's Stadium -- home to the San Francisco 49ers. 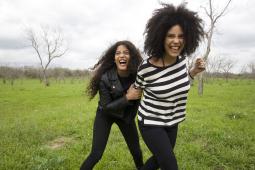 Levi's is also tapping into its connection with music in this latest push; musicians like Bruce Springsteen and Joan Jett have often performed in Levi's, said Ms. Sey. "Music represents authenticity and self expression and that's what the Levi's brand is really about," she said.

Levi Strauss, which counts the Levi's and Dockers brands, as well as a signature collection and the Target-exclusive Denizen brand, spent $28 million on domestic measured-media in 2014, according to Kantar Media. More than $23 million of that was spent on the Levi's brand.

Ms. Sey declined to reveal the budget for the new campaign.

The collection kicked off with an event in New York City on Tuesday night featuring a photography exhibit by Petra Collins, which starred notable women like Ms. Jett, as well as members of the bands Lion Babe and The Misshapes, who also performed at the function.