BATAVIA, Ohio (AdAge.com) -- Jim Stengel's departure from Procter & Gamble Co. and its $8 billion advertising budget might look like a retreat to some. But from his new perch as part-time UCLA marketing professor and a part-time consultant, he's plotting something bigger than he ever imagined at P&G.

BACK TO CLASS: Stengel's much-anticipated M.B.A. course features real-world lessons, visits from professionals and off-site visits to local retailers.
He's trying to become the de facto CMO to the world, leading a revolution already well under way toward purpose-driven marketing. That mission is starting with 140 second-year M.B.A. students as he seeks to create change agents through his first "The CMO Experience" class.

Mr. Stengel is looking to reinvent marketing education along the way, scrapping most historical case studies for live ones presented by top creatives from BBDO and TBWA/Chiat/Day and executives from Dell, Procter & Gamble Co. and PepsiCo. He and Sanjay Sood, UCLA marketing professor and collaborator on the class, plan to pitch it as a model to the Harvard Business Review.

Part two in Mr. Stengel's plan is his long-awaited book, set to be published by Crown Books next year, for which he's enlisted a platoon of UCLA students, WPP's Millward Brown and TBWA/Chiat/Day executives to help quantify and dissect the 50 brands that have added the most brand and financial value in the past decade and the purpose that drives them (hint: the top two are Google and Apple). The book's working title is "Grow: How the World's Best Businesses Use the Power of Ideals to Outshine the Competition."

Mr. Stengel is even looking to return to Cannes in June after a year's hiatus following his departure from P&G, and with the very big picture in mind. The idea, hatched with help from executives at WPP's Bridge Worldwide and TBWA, is to pose, then attempt to answer, "The Burning Question" somewhere between a presentation at the Palais des Festivals and breakout sessions on the beach, possibly around bonfires. Mr. Stengel already has a burning question in mind, but he's not letting on just what it is yet. In the meantime, he and the IAF plan to solicit burning questions from the marketing world as a whole at burningquestion.com.

Ambitious plans
And in his spare time, Mr. Stengel is consulting with a host of marketers that include Dell, Luxottica, Brown Forman, Boston Scientific, Eli Lilly and Yum Brands. He's also working on the UCLA brand, having discussed with folks at TBWA the idea of a Facebook fan page that would collect as many photos as possible of people with legendary coach John Wooden in honor of his upcoming 100th birthday. It's an ambitious schedule, even for a guy who never lacked ambitious plans. Mr. Stengel often got more respect and a more attentive audience outside P&G than inside during his years as global marketing officer. While P&G readily adopted and has executed perhaps more diligently his "purpose brands" approach, it remains a company full of marketers, many if not most of whom think they know marketing as well or better as the next.

"When his book comes out, it's going to be one of those touchstone books, and not just because we're working on it," said Rob Schwartz, chief creative officer of TBWA. Mr. Schwartz was one of the presenters at an offsite meeting of Mr. Stengel's class earlier this month at the Playa Del Rey agency. (TBWA CMO Laurie Coots is the primary agency executive working on the book.)

One segment of Mr. Stengel's class at TBWA on March 3 had Margaret Keene, group executive creative director on Pedigree at TBWA, recounting the development of the "Dogs Rule" campaign. She noted that at the time it was developed six years ago, P&G's Iams was the only other brand that had moved at all toward talking about the emotional connection between people and dogs -- it just hadn't moved very far. TBWA took Pedigree much further down that path with an insight from a consumer: "If you convince me you love dogs, I just might let you feed mine." 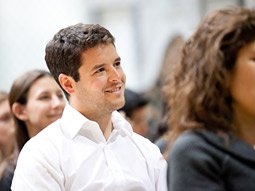 Later, asked over dinner why Iams hadn't taken a similar approach, Mr. Stengel acknowledges the brand was "too stuck in the rational benefits" to see the emotional power.

Much of what he's teaching UCLA's M.B.A. students, who put more chits on Mr. Stengel's class than any other in the school's history using a bidding system that assigns schedules, is even more current. Erica Hoholick, managing director at TBWA for Pepsi and P&G's Pur account, presented the case for the development of Pepsi Refresh campaign, complete with a cameo from Ralph Santana, VP-colas at Pepsi-Cola.

Life experiences
As with many of the cases in Mr. Stengel's class, the textbook hasn't been written because the story isn't over yet, and success isn't assured, he noted, as in the case of Monique Bonner, director-global branding at Dell, which is in the midst of a turnaround effort.

In almost every class, Mr. Stengel covers something from his current or past work and engages students in a discussion of current marketing events. Toyota has been a hot topic of late.

Mr. Stengel said he likes to get into the nitty-gritty details, getting students to focus on organizational obstacles they'll encounter and, in his own case, talking about how P&G's turnaround of Pampers last decade included "firing some people" and reassigning others. There's also the occasional historical tidbit, such as how TBWA's Jean-Marie Dru, now chairman emeritus, would get together with Mr. Stengel once a year in hopes of landing a place on the P&G roster, until finally doing so with Pur in 2007. He retired soon afterward.

"Other courses ... tend to be academic and theoretical, whereas this is rubber meets road, where you see how it is, and it's messy in real life ... and it's stressful and there's a lot of hand-wringing to get to the right answer," David Lubars, chief creative officer of BBDO North America and another presenter during the course, said in a video interview with Mr. Stengel.

The class has also taken students to the back room of a local Target store and the tony shops of Rodeo Drive in Beverly Hills to see brands brought to life at retail. "It's so much more hands-on than a lot of classes we've had," said Kara Kobaki, one of Mr. Stengel's students, and, ironically enough, a sales executive with P&G's salon professional business in Los Angeles who never met Mr. Stengel when he was at P&G.

Raj Iyengar, who plans to start a position with Cisco after graduating in the spring, found a key takeaway has been "getting back to the soul of the brand, why a brand was started, really has an impact on every aspect of the business. ... We really get a sense of how big brands have faltered and come back."