Yes, "brands are important, even to millennials, but not necessarily incumbent brands," Sanford C. Bernstein stated in a report this week, summarizing a consumer summit it hosted in New York. And that could be a troubling sign for the big companies that dominate when it comes to ad spending. Stated Bernstein: "What we learned is that brand authenticity -- particularly around 'trust' -- is key, not just being omnipresent/big. Unfortunately, for many of our large coverage companies, this runs amok of their long-established brands as those are often identified as faceless machines of profitability and propaganda by many consumers, not as trustworthy or even high quality." There is hope for big brands that can cultivate trust, the report suggested. But "so far it remains a challenge for large companies to re-brand an incumbent brand and develop trust."

Indeed, big brands are under the microscope like never before. Consider one recent example involving Tyson Foods. The food company is the main target of a new "Tyson Tortures Animals" video from Mercy For Animals, which is voiced by Alec Baldwin. The latest video includes some of the same footage shown in earlier videos about the group's undercover investigation, which included Candice Bergen on screen and in voiceover.

The videos are focused on Tyson and also call out that it supplies restaurants including McDonald's, KFC and Chick-fil-A. Tyson said the latest video is a compilation of footage released months ago that it has already addressed, noting that the farmers shown no longer raise chickens for the company and workers shown mishandling birds were fired. "We're committed to raising healthy chickens and making sure they're treated properly," Tyson said. Mercy For Animals responded that it wants to see Tyson use its clout to change industry practices, pushing for it to replace live-shackle slaughtering with what's called "controlled atmosphere killing." Tyson added that it has conducted research into Controlled Atmosphere Stunning (CAS) and other alternative handling methods and while it has "not found them to be more humane than conventional electrical stunning," it believes they are worthy of more study. 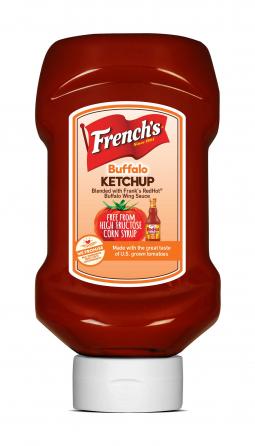 Plenty of big food brands are trying to reclaim consumer trust by overhauling their products as part of the so-called "clean label movement." For example, condiment marketer French's on Wednesday unveiled the "French's Promise," which includes putting a new "promise seal" on products beginning in January that pledges "Great Taste, Real Ingredients, True Commitment to our Communities." The company says it spent 2015 refining its product recipes and "today, more than 90% of the company's products now include only real ingredients, without artificial flavors, colorants, dyes or high-fructose corn syrup (HFCS)." The effort will be supported by a new TV and online campaign. Meanwhile, French's has launched two new products: French's Super Yellow Mustard, which uses "#1 grade mustard seeds and more turmeric spice;" and French's Buffalo Ketchup, which is infused with Frank's RedHot and is marketed as "High-Fructose Corn Syrup Free." French's and Frank's are owned by RB, formerly known as Reckitt-Benckiser.

Church & Dwight Co.'s OxiClean has been a big sponsor of Major League Baseball: Its deal even temporarily muscled Tide off the new scoreboard that Procter & Gamble Co. paid to build at its hometown Great American Ballpark before the All-Star Game in Cincinnati last July. But now OxiClean is reaching deep into small-time sports for two new 30-second ads from Ferrara & Co. featuring endorsements from the Franklin County (Kentucky) High School football team. Zagging to high-school sports wasn't part of any grand plan. It all came from a fan letter the school's equipment manager, Sam Brough, wrote to the brand with "before" and "after" pictures of team uniforms treated with the product, said Michael Vercelletto, OxiClean group brand manager. He also got a jersey from the team, which he brought to the brand's annual planning meeting, just as an inspirational aside to show "we're impacting people's lives here." Mr. Vercelletto got such good reaction internally to the story that he ultimately decided to visit the school this fall, bringing a camera crew that shot footage for the ads.

Red Robin Gourmet Burgers made two non-hamburger marketing announcements this week. First, its two kids' pasta meals will now officially be "bottomless," so hungry kids can get refills of mac and cheese or pasta with sauce like its patrons get refills on drinks and fries. The kids' pasta had been secretly bottomless until the practice was rescinded in June, and the chain said letters from kids and other feedback led to its less-than-secret return. The plan was announced online with a video featuring CEO Steve Carley, ahead of a planned full-page ad set to run Wednesday in The Denver Post.

Ask and you shall receive! Check out this special announcement about our kids pasta from our CEO!! https://t.co/xdLb12rrpP

Red Robin also said it would give out free chicken burgers Dec. 10 to people with names derived from the name of Santa -- so something like Christopher, Christine, Nicole or Nicholas will do. (No idea whether Saint West qualifies.) It's part of the ongoing #NameThatChicken contest for a sandwich that includes a grilled chicken breast, arugula, fontina cheese, peppered bacon and oven-roasted tomato aioli.

In other restaurant news, Buffalo Wild Wings is using a variety of marketing tactics to promote the chain and its second-year sponsorship of the Citrus Bowl. Zesty Citrus Sauce, created in partnership with Mountain Dew, will be a limited-time sauce available Dec. 14 to Jan. 2, and is being described as Mountain Dew infused with lemongrass and spicy red pepper flakes. Spectators at the game (the Jan. 1 bowl pits the Michigan Wolverines against the Florida Gators and will air on ABC) can get Buffalo Wild Wings boneless wings in Zesty Citrus and Honey BBQ, as well as chicken tenders at concession stands. A video board at the game will stream reactions from restaurants in the team's regions: Ann Arbor, Mich. and Lake City, Fla. The chain also said it would donate at least $2.7 million to Boys & Girls Clubs of America.

Meanwhile, McDonald's Canada is entering the next phase of a contest in which restaurant employees submit menu ideas. In the "Secret Secret Menu Challenge," burger or wrap recipes had to use existing McDonald's ingredients. The contest was pulled together by creative agency Cossette and the Ontario Regional McDonald's marketing team and included a video poking fun at company secrecy efforts.

Judging begins for the top eight recipes, which include a McFish & Chips wrap and a Grilled Cheese Burger. Next year, a grand prize winner will get $10,000 and a bonus $500 for his or her restaurant. The runner up will get $5,000, with a third place finisher netting $2,500 and the winner of the people's choice taking home $1,000.

Finally, a couple of notes about holiday shopping.

About 15% of consumers will shop at the last minute this season, according to a recent study from software company Vennli. The majority -- or 69% -- of that group plans to buy at Target, the study found, though Walmart, Nordstrom and Macy's are also expected to attract late shoppers. That's good news for Target's new Wonderland pop-up store, a game-and-activity-filled space that will operate only between Dec. 9 and Dec. 22. "Not only are people searching for gifts, but they're increasingly searching for experiences," said Target Chief Creative Officer Todd Waterbury of the effort. Meanwhile, Boston Consulting Group is out with a new survey stating that four in 10 millennials say they'll spend more this holiday season than last, compared with only 24% of older generations. And 55% of millennials said they would try a new brand this season, versus only 36% of the rest of the population.

Some of these young shoppers will undoubtedly be looking for brands they can trust.