Coty has been on a shopping spree for years, doubling its size with last year's acquisition of much of Procter & Gamble's former beauty business. But it has acquired a lot of declining brands – leading to a 7.5% dip in measured U.S. retail sales last year, per Nielsen data from Deutsche Bank.

Now Coty has shifted gears by snagging a rising star. It has agreed to buy a 60% stake in one of the fastest-growing social-media-fueled beauty brands – Younique —in a deal expected to close later this year. The brand, marketed heavily by 200,000 direct-sales reps via Facebook and other social channels, had sales of around $400 million to 4.1 million consumers in 2016, according to a release by Coty. That's up from a reported annual run rate of just $24 million in December 2013.

Coty isn't the only beauty player on the hunt. L'Oreal has agreed to acquire mass skincare brands CeraVe, AcneFree and Ambi from Valeant for $1.3 billion. The brands have combined sales of $168 million, the companies said in a release, valuing them at a hefty 7.7 times sales. That's still below the more than 10 times sales that Johnson & Johnson paid for haircare marketer Vogue International last year.

CeraVe in particular is growing fast, averaging 20% sales increases each of the past two years. L'Oreal will incorporate the over-the-counter brands into its mostly prestige and professional Active Cosmetics Division, whose U.S. sales will nearly double, according to Frederic Roze, CEO of L'Oreal USA. Interpublic's McCann Humancare has worked on CeraVe, and parent McCann Worldgroup is already on L'Oreal's roster. 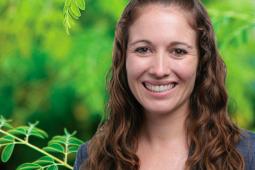 Sticking with investment news, have you tried moringa? Kellogg Co. has, and it sees potential in the plant protein. Kellogg's venture capital fund, eighteen94 capital, led a $4.25 million Series A funding of Kuli Kuli, a maker of moringa-based products including bars and powders founded by Lisa Curtis. The deal marks the first investment for eighteen94 capital, a fund that launched last year to help Kellogg find and invest in innovative ideas. Other institutional investors in the round were InvestEco and S2G Ventures, Kellogg said.

Kuli Kuli says moringa packs more of a nutritional punch than kale, and it was cited by The Wall Street Journal last year as a food trend to watch.

"By investing in Kuli Kuli and helping them grow, we're backing a new superfood category, one in which we see the potential for ongoing high-growth," Simon Burton, managing director of eighteen94 capital, said in a statement. Mr. Burton was also named to Kuli Kuli's board of directors. 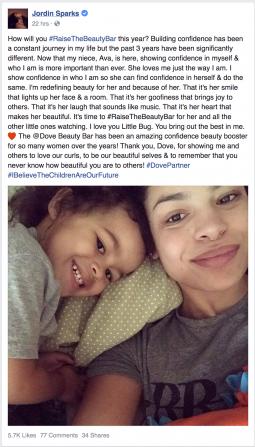 Dove is turning 60, and Unilever is celebrating the milestone with a new ad and limited-edition beauty bar engraved with the word "care," which the brand says symbolizes "the superior care Dove has provided women over the past 60 years." It's also rolled out the #RaiseTheBeautyBar tagline for the occasion to spark conversation about how people will redefine beauty, in keeping with the brand's long-running "Real Beauty" campaign. The social-media effort is backed by Jordin Sparks and Nicole Richie among others. Dove is a multi-billion-dollar global brand from an Anglo-Dutch company, but had it's origins in the U.S. 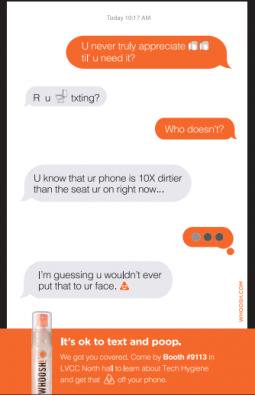 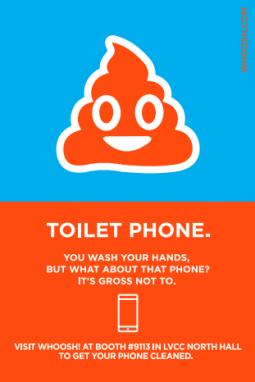 What was the dirtiest place at CES? Whoosh!, which makes a cleaner to disinfect mobile phones, claims it was the phones of the many attendees. To drive home the point, it plastered 1,000 stickers like these with the "It's OK to text and poop" message, on stalls and mirrors in bathrooms around the Las Vegas Convention Center. In an ad deal with the center, Whoosh! is sticking them in bathrooms for other shows as well.

From funny to sad in the bathroom, here's the latest installment of work from Deutsch Los Angeles, for Angel Soft from Koch Industries' Georgia-Pacific proving it's perfectly possible to jerk tears with toilet-paper ads. In this batch documenting the travails of two dads and a mom, the brand shows how they're both soft and strong – just like Angel Soft. 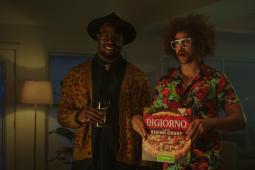 Rise to the occasion

Nestlé USA's DiGiorno is gearing up for the end of the NFL season with the help of Von Miller, the MVP of last year's Super Bowl. But the frozen-pizza marketer is not showcasing the football player in a typical sports spot. Instead, the rising-crust pizza brand enlisted DonerLA for a "Rise to the Occasion" music video, along with talent and production work supported by The Reach Agency. The nearly four-minute video, which launched last week, also features the musical talents of Redfoo, Marcus Perez, Devvon Terrell, Diamond White and Madilyn Bailey. Another star is DiGiorno's own Chris Brody, who years ago rapped as O-Fresh before getting into food marketing. Mr. Brody pops up at the 1:07 mark in a black and white jacket.

The video is on YouTube and elsewhere, with shorter pre-roll versions on sites such as SI.com. The song is available on Spotify and SoundCloud. JSM Music co-produced the song with Redfoo and the video was directed by Rami Hachache of Prettybird Productions.

Lastly, some news from the boardroom. DineEquity Inc., which runs Applebee's and IHOP chains, named Lilian Tomovich to its board of directors. Ms. Tomovich is chief experience officer and chief marketing officer of MGM Resorts International and becomes the 11th member of DineEquity's board. "She brings phenomenal energy, experience and skills in digital marketing, loyalty strategy and guest relationship management," DineEquity Chairman and CEO Julia Stewart said in a statement.