Coke's Citrus Brand Goes All Black-and-Yellow In Design Overhaul
READ THIS NEXT
Earth Day 2021: How brands are responding to consumer demands for sustainability

Add Mello Yello to the list of beverage brands getting an extreme packaging makeover. The Coca-Cola owned brand recently teased its new packaging on Twitter.

Anyone else get new gear for the holidays? Look for the bold new Mello Yello cans in 2016 pic.twitter.com/vAOAcJWv0t

The design -- which features a vertically scripted "MY" phrase and uses black and yellow and a touch of green -- is a radical departure from previous packaging that used green and and orangish-red color against a yellow backdrop (see left). Packs of New Mello Yello Zero will show yellow and silver wording against a black backdrop. Last year, Mellow Yello dressed its cans and bottles in camouflage as part of a new partnership with hunting and outdoors brand Realtree. The new packaging is hitting shelves now and will be supported in out-of-home, radio and in-store advertising, according to a Coca-Cola spokeswoman. Beverage Digest first reported the 2016 packaging overhaul late last year based on information obtained from a bottlers meeting. The report noted that the "citrus brand, a longtime distant second to PepsiCo's dominant Mountain Dew, will get what was billed as a disruptive package, logo and marketing redesign." Other beverage brands that have recently redesigned their packaging -- or are planning to -- include Sierra Mist, Bud Light, Blue Moon and Coors Light.

Out in Las Vegas this week, plenty of automakers are using the Consumer Electronics Show to tout techy innovations and plug autonomous driving developments. But advocacy group Consumer Watchdog is trying to crash the party. The organization is seeking to brand the cars as "robots," saying in a statement today that "consumers and regulators should not be fooled by the autonomous vehicle hype coming out of the Consumer Electronics Show." "Robot car advocates are putting a glitzy spin on their 'autonomous' technologies," John Simpson, Consumer Watchdog's privacy project director, said in a statement. "The fact is that while some emerging technologies may promote safety, self-driving robot cars are not remotely ready for deployment on public highways without a steering wheel and pedals so a human driver can intervene when necessary."

Automakers are, of course, using friendlier-sounding names to describe their self-driving technology. Kia, for instance, used CES this week to launch a new sub-brand called "Drive Wise" that includes its partially-autonomous driving technologies, as well as fully-autonomous driving cars that it wants to introduce by 2030. In a statement, the automaker played up the safety aspects of the technology. Technology being displayed at CES includes "urban autonomous driving" that "applies GPS and sensors to identify the car's position on the road, allowing it to safely navigate through densely-congested city environments while responding to live traffic updates." In Kia's statement, Tae-Won Lim, senior VP-central advanced research and engineering institute of Hyundai Motor Group, said: "Kia is undergoing a very promising and gradual process of introducing partially and fully autonomous technologies to its vehicles. Although the first marketable fully-autonomous car from Kia will not be available in the immediate future, the work our R&D teams are currently doing to develop our range of Drive Wise technologies is already improving on-road safety and driver assistance." Kia released this promotional video:

Just when the Star Wars hype is finally dying down, here comes Batman and Superman … and Dory. General Mills kicked off January with two cereals tied to the upcoming movie "Batman v Superman: Dawn of Justice" well before it hits theaters in late March. One cereal includes bat-shaped pieces with a chocolate strawberry flavor, while the other is a caramel crunch flavored Superman cereal with pieces shaped like his famous chest shield. General Mills also announced a wide range of other new products, including Yoplait Kids packs of Finding Dory Fin-Tastic Cherry and Sea-sational Strawberry flavored yogurt. "Finding Dory," the sequel to 2003's "Finding Nemo," is set for a June release date.

General Mills is also jumping into the protein snacking game. The company said it bought Austin-based Epic Provisions, which makes meat snacks such as Bison Bacon Cranberry bars, jerky bites and trail mix. It will house Epic within the Annie's business, which is best known for products such as organic bunny-shaped macaroni and cheese and snacks. 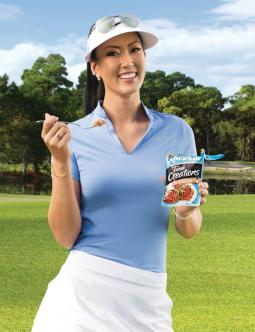 Meanwhile, Charlie the Tuna has a new golf buddy. Michelle Wie is the new spokeswoman for StarKist and will represent the brand's Tuna Creations, Salmon Creations and Kid's Creations single-serve pouches. "With my gluten-free lifestyle, it is hard to find smart and convenient snacks that keep me full and satisfied while I am training and on tour," Ms. Wie said in a statement. She will appear in multimedia campaigns and help develop recipes and tips, StarKist said.

With clean eating announcements coming out quite often --- restaurants and manufacturers announcing non-GMO this, or antibiotic-free that -- Panera Bread took a fresh approach to its latest "free-from" update. On Wednesday it released a mock movie trailer starring its head chef Dan Kish re-enacting the process that led to its new, cleaner soup. Panera Chief Marketing Officer Chris Hollander said the idea was to "have a little fun" with the announcement rather than using earned media or traditional advertising. It is asking fans to Tweet soup reviews, which may then appear on the site and unlock additional footage. Using Mr. Kish in the latest video (he's been in some Panera videos before) rather than an actor complimented the idea of transparency. Mr. Hollander said the idea stemmed in part from the process, saying it took Panera about 60 tries to get the right mix of ingredients for its top-selling Broccoli Cheddar soup. Ultimately, it dropped ingredients such as sodium phosphate, hydrolyzed corn and soy protein, autolyzed yeast extract and bleached wheat flour. The lead agency on the effort is Anomaly.

L'Oreal Paris, long focused squarely on beauty benefits, is tweaking its "Because You're Worth It" tagline for a campaign aimed at joining the women's empowerment conversation -- a popular theme with brands for women in recent years. The #WorthSaying campaign launches the night of Jan. 10 at the Golden Globe Awards on NBC. L'Oreal Paris celebrity spokespeople Julianne Moore, Freida Pinto and Eva Longoria will share their thoughts using the hashtag on Twitter on such things as the importance of strong female role models and encouraging women to speak their minds, said Karen Fondu, president of L'Oreal Paris, in an e-mail statement. The campaign from McCann and Alison Brod PR will include ads during the Golden Globes broadcast directing people to join the conversation with L'Oreal Paris on Snapchat. "Worth Saying" builds on L'Oreal's long-running tagline, but won't replace it, Ms. Fondu said.

Finally, a couple of executive moves to report this week:

Rita Patel, who has logged time in the marketing departments of MillerCoors and Target, has joined Beam Suntory as VP for the mixables division. The division includes vodka, tequila, cordials, rum and encompassed brands such as Pinnacle, Effen, Sauza, Hornitos, DeKuyper and Cruzan. She was most recently at Target where she served as senior director of marketing for grocery, multicultural and marketing planning, according to her LinkedIn page.

National anti-hunger organization Share Our Strength has appointed Peter Kaye as its chief revenue and marketing officer. In the newly created role, he will be charged with uniting the organization's fundraising and communications departments to gain "greater brand awareness and revenue growth for Share Our Strength's No Kid Hungry campaign," according to a statement. He was previously CMO at NuTek Food Science, maker of Salt for Life. Previously, he was head of marketing at Honest Tea.