Lowdown: Pritchard Advises CMOs to 'Dig In' on Media Issues

Why did Procter & Gamble Co. get tough on media-agency contracts and digital audience measurement? Because Chief Brand Officer Marc Pritchard got into "the weeds," and he recommends other chief marketers do likewise. In a talk last week to the Association of National Advertisers Media Conference, Mr. Pritchard said not much happened on those issues until he took personal responsibility for understanding things, even reading the Media Rating Council viewability standard, which he jokingly called "riveting." In chat with ANA CEO Bob Liodice later, Mr. Pritchard said he listened intently at ANA board meetings for years, "and I understood about a 10th of it. Then I would go back and delegate to someone." On agency contracts he'd hear from his people: "We looked into it. There's no problem. Then I'd say, 'We need to get verification on this viewability.' And they'd say, 'We're best in class.' Over time it started to strike me that maybe there's something not quite right." He suggests on such issues as programmatic media buying that CMOs "dig in. Go understand every step." 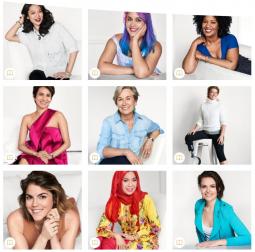 To celebrate its 60th anniversary, Unilever's Dove is re-committing to its nearly 13-year-old Real Beauty campaign with a new pledge. It includes creative standards requiring the brand to only use "real women, never models" and introduce all women in ads by their names. The brand also pledges to reflect diversity and "portray women as they are in real life," with "zero digital distortion." And women shown in the ads get approval rights for images used. Dove also pledged to extend self-esteem education to 20 million more girls by 2020. To highlight the pledge, Dove commissioned photographer Mario Testino to do portraits of 30 women unveiled last week. "It's a massive commitment by one of the biggest advertisers in the world," covering 141 countries, said Sophie Galvani, global brand VP of Dove, in an interview. Of course, one thing different now from 2004 is that the U.S. has a new president, married to a former model, and he's expressed views about women and beauty quite different from Dove's. How does that affect Real Beauty? "I think now is the perfect moment to be talking about this," Ms. Galvani said. "I think now women need the support from wherever they can get it."

For its 18th birthday, Swiffer has a new "If You've Got a Life, You Gotta Swiffer" campaign from Publicis, showing such things as a boy making a mess by cutting hair (his own and that of stuffed animals) and a girl bringing a frog inside to play. There's consumer insight behind the messes, said Kevin Wenzel, associate brand director of North American surface care for Procter & Gamble Co. "Maybe counterintuitively, people are doing more cleaning today in terms of number of occasions. People are still doing a deeper clean on Saturday mornings with the family. But they're doing more in-between cleanings." Swiffer wants to be the tool for those "in between" cleans of everyday messes, he said.

Carol's Daughter, the multicultural beauty brand acquired by L'Oreal in 2014, has grown fast of late in part from a sixfold expansion to 25,000 stores last year aided by its new parent. Now the brand is getting its first TV advertising this week from Tag Creative, New York, featuring founder and CEO Lisa Price and featuring the "Born in Brooklyn. Made with love" tagline. "Carol's Daughter was looking to refresh the brand and really build awareness with a much wider audience," said Gina Delio, chief creative officer of Tag, and she expects the new effort to help do both.

The heat is on bigger consumer packaged goods companies as smaller players continue to gain ground in a sluggish environment. Over the past five years, about $20 billion in sales shifted to smaller companies from larger ones, according to a new report from Boston Consulting Group and IRI. They said U.S. sales of consumer packaged goods rose 1.4% to $681 billion in 2016. The growth rate was down from 3% in 2015, and 2016 was the sector's weakest year since 2011. While the slower pace of growth sounds alarming, BCG and IRI were quick to point out that much of the weakness stemmed from price deflation rather than lower sales in units. Amid that slower growth, companies with annual sales of less than $1 billion saw their share of the U.S. CPG market rise to 25.6% from 25.1% a year earlier. The winners, both big and small, were largely companies focused on two opposing fronts. "Our research shows that the growing popularity of convenient nutrition and wellness remains one of the most powerful trends in the U.S. consumer packaged-goods industry," Jim Brennan, a BCG partner and co-author of the study, said in a statement. "But this does not mean that American consumers' craving for indulgences has diminished." On the healthy side, companies including Blue Diamond, BodyArmor, Califia Farms, Bragg, and The Wonderful Company were among the growth leaders. Companies with more indulgent offerings that fared well included Mars, Hershey's, PepsiCo, Hostess, Grupo Bimbo and Constellation Brands. Health and beauty products with wellness cues were also strong, they said. The BCG/IRI study tracked what was actually purchased in measured channels.

Meanwhile, Bernstein food industry analyst Alexia Howard's look into the latest period of Nielsen scanner data showed things are not perking up so far in 2017. In a research note entitled "U.S. Food: Who killed packaged food? Trying to understand the sequence of exceptionally weak scanner data," she said private label products and "increased competition from challenger brands" could explain why U.S. packaged food sales fell 5.1% in the four weeks ended Feb. 25. The company with the smallest decline was Hershey, while General Mills was one of the weakest performers.

Onto some sweeter CPG news: Starburst is proving its social media cred by bringing an often-requested item to reality. For the first time, it will sell single-color packs of the chewy candy, with just pink. The all-pink packs are going to have a limited run in April for fans who really, really like finding that color over others. While the candy isn't hitting stores until next month, Starburst took an early outreach approach. In February, it was sending the special packs to influencers including "The Bachelor" season 17 star Catherine Giudici Lowe, who tweeted about her pack of all pink Starburst to her hundreds of thousands of followers. The candy will be sold by certain retailers including Walmart, Walgreens, Target, Kroger, Meijer, H-E-B, and Amazon. The Wrigley brand is doing social and public relations outreach with Olson Engage on the pink packs, but has no plans for other advertising.

I got a very sweet #gift from @Starburst in the form of an ALL PINK PACK 😍😍😍 Thank you! pic.twitter.com/fDMWcgorE5

Redd's Apple Ale is no longer hitting drinkers over the head with apples. That was the ad approach the MillerCoors brand had taken since debuting the apple-flavored beer in 2012 when WPP's Cavalry handled it. Redd's, which is now with Mekanism, this week debuted a new tactic that uses animation and a new tagline, "Together We Beer." Below is one of the new spots:

Finally, one executive move to report this week: Chobani named longtime Nestle executive Tim Brown as its president and chief operating officer, effective March 20. Mr. Brown, most recently chairman, CEO and president of Nestle Waters North America, will report to Hamdi Ulukaya, Chobani's founder, owner, chairman and CEO. Mr. Brown will oversee the operations, sales, marketing, legal and finance teams at Chobani. He fills a spot left vacant since December, when Kevin Burns left Chobani after about two years. "Joining a company like Chobani to partner with someone like Hamdi and this great team is a once-in-a-lifetime opportunity," Mr. Brown said in a statement. "I've been following Chobani for years as they have changed the food landscape in this country." In an email to Chobani staff obtained by Ad Age, Mr. Ulukaya did not make any suggestion that bringing in a new president-chief operating officer under him means he has any plans to step down from the company he founded. Mr. Ulukaya called Mr. Brown "a true leader with strong values who believes in the power of people and culture. Tim's also very passionate about plants, operations, sales and customers – all things we have in common." Along with the appointment, privately-held Chobani said its sales grew at a double digit rate in 2016.