Vodka Brand's 'Exclusively For Everybody' Campaign Goes for Mass Appeal

Smirnoff -- the largest U.S. vodka brand by far -- is coming back with its vodka-for-the-masses pitch. The anti-pretentious "Exclusively for Everybody" campaign by 72&Sunny, New York, which debuted last year, is being refreshed this year with ads starring actors and comedians T.J. Miller and Thomas Middleditch of HBO's "Silicon Valley." In the ads, the duo takes a road trip to New York Comic Con, making humorous vodka-related observations along the way. In one spot Mr. Miller gives his take on the Moscow Mule, suggesting it was created by an "Amish coppersmith from Moscow, and his only friend was a mule and he named it after his mule when he died." He is corrected by a man who tells him simply that the cocktail was "invented with Smirnoff in Los Angeles." Indeed, according to the official origin story from Smirnoff, the drink was created in 1941 when John Martin of Smirnoff teamed up with an L.A. restaurateur. Mr. Martin "was looking to stir excitement for the clear spirit at a time when whiskies and bourbons were king," says Smirnoff -- which sounds a lot like the situation today.

In beer, no one has stirred more marketing excitement than the Most Interesting Man in the World. The campaign for Dos Equis -- which went national in 2009 -- continues to be viewed as the biggest breakthrough beer campaign of the last decade. But brand-owner Heineken USA has made one subtle, but notable, shift in the campaign of late. It used to be that Heineken strictly limited PR and promotional appearances by the actor who plays the Man, Jonathan Goldsmith. The reason was that Heineken did not want the character to overshadow the brand. But that apparently is no longer a concern. Last week, Mr. Goldsmith appeared at a private meeting of Heineken distributors in Las Vegas, for instance. And on Oct. 31, Mr. Goldsmith, appearing in character, will serve as grand marshall of New York City's 42nd Annual Village Halloween Parade. The appearance is timed with the brand's "Masquerade" campaign, which encourages fans "to seduce their senses and unmask a world of intrigue this Halloween season," according to Dos Equis.

In more sobering booze news, the Ad Council and National Highway Traffic Safety Administration this week announced their first public service campaign aimed at preventing underage drinking and driving. The ads were filmed entirely on an iPhone and describe underage drinking and driving as the "ultimate party foul." The campaign was created on a pro bono basis by Merkley & Partners, New York and will include TV, digital and outdoor. The Ad Council and NHTSA first teamed up in the 1980s for the "Friends Don't Let Friends Drive Drunk" campaign. In 2005, a new tagline was launched stating "Buzzed Driving is Drunk Driving" that was meant to target those most likely to drive impaired.

Turning to the world of non-alcoholic drinks, stadiums are looking beyond the usual beverages for partnerships. In the last week, we've heard about three deals that go beyond the sports drinks, soft drinks and beer often tied to teams and players. 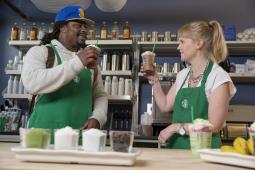 Starting Oct. 22, Starbucks patrons in certain areas can try the Beast Mode Frappuccino, concocted by Seattle Seahawks running back Marshawn Lynch, who wears No. 24. Sales in Washington state and Oakland, Calif. will raise 24 cents per order for the Fam 1st Family Foundation. The drink, set to be on sale until the end of the football season, is a double mocha Frappuccino with mint, cream and protein powder, then topped with whipped cream, purple berry drizzle and a little matcha. "I'd drink this before a workout," Mr. Lynch said in a Starbucks statement. "You could get your buff on with this."

In a separate deal, the Seahawks announced Humm Kombucha as the official kombucha of the Seattle Seahawks. The Seahawks will promote sample tastings around CenturyLink Field. Humm's pomegranate lemonade and coconut lime are on tap at the stadium and all nine of its flavors are in the Seahawks' Grab and Go Market. "We are proud to feature Northwest brands at CenturyLink Field," Amy Sprangers, Seahawks VP-Corporate Partnerships, said in a statement. "Humm is a great local company and their kombucha will provide an additional beverage option for our fans."

Back to the Future: Pizza Hut's dehydrated pizza

Pizza Hut is looking to notch a win with its loyalty program. So the chain is trying a unique approach on Wednesday to get more members: a three-hour online comedy block including 180 giveaways. Pizza Hut began email marketing in 2003 and renamed the program Hut Lovers in 2012. It currently has several million members of Hut Lovers and hopes to court more fans with three hours of live streaming content hosted by Texas-based comedy group Four Day Weekend. The online broadcast, live from Pizza Hut's headquarters, is set to begin at 1 p.m. EDT at pizzahutlive.com. People who watch and enter codes during the broadcast could win one of 60 Xbox One consoles with a copy of HALO 5: Guardians (set to hit stores Oct. 27), 100 selfie sticks, or 30 helpings of free pizza for a year. There are enough prizes to cover one per each minute of the three-hour broadcast. Said Mehreen Shams, Pizza Hut's senior manager, CRM: "We wanted it long enough where we were covering a good portion of the afternoon when we typically see conversations about food through the social space." The agency assisting is TracyLocke.

In other Oct. 21 Pizza Hut marketing news, the chain created special packages with replica hydrators and foil bags to commemorate the half pepperoni/half green pepper dehydrated pizza shown in "Back to the Future Part II." Ad Age got its package just in time for 10/21/15, the day Marty McFly travels to in the 1989 movie. The cardboard version of the hydrator also included a throwback-style t-shirt and a bottle of Pepsi Perfect. 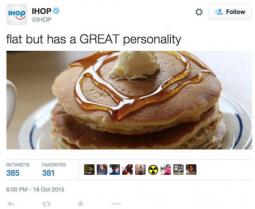 Meanwhile, another restaurant is working on coming back from an online gaffe. On Oct. 18, IHOP sent a tweet that was meant to be humorous but quickly turned into a PR problem. The tweet, which showed a stack of pancakes with the line "flat but has a GREAT personality" was taken down and IHOP apologized with a tweet that reads: "Earlier today we tweeted something dumb and immature that does not reflect what IHOP stands for. We're sorry." For more on the Twitter backlash, check out First We Feast.

Back to more old-school marketing techniques, like direct mail: At the Association of National Advertisers "Masters of Marketing" meeting last year, Alma Salazar, associate marketing director of Santa Clara, Calif.-based Align Technology, found a "golden ticket" under her chair entitling her to $1 million in direct mail and creative services from the U.S. Postal Service and its agency, MRM/McCann. USPS delivered. The only string attached was that the work become fodder for a case study this year. Though he made no mention of last year's giveaway, Chris Karpenko, USPS director of brand marketing, did talk at this year's sponsored ANA breakfast in Orlando about a campaign for Align's Invisalign clear plastic braces, which included encouraging consumers to download an augmented-reality app to help them compare what they'd look like with metal braces vs. Invisalign.

Ms. Salazar wasn't part of the presentation, but in an interview later said she was pleased with the results. Invisalign has done direct mail in the past aimed at its direct customers -- orthodontists. A million dollars of mail would have been overkill for that group, amounting to more than $160 for each of the 6,000-plus in the U.S. So Invisalign tried its first-ever direct-to-consumer mailing, targeting people within a 15-mile radius of top-performing orthodontists, Ms. Salazar said, and is pleased enough that it's considering paying for another consumer mail effort next year. "One lesson for me is that you need to keep experimenting, not just with new media, but with traditional media," Ms. Salazar said.