Welcome to the Super Bowl LI edition of Lowdown where we take a look at some ways in-game advertisers and those that aren't in the game are trying to seize on advertising's biggest day.

Wendy's is in the Super Bowl for the first time. But of course, having a Super Bowl spot is not enough to generate the buzz brands are hoping for with their big spending. Wendy's is teasing its "Othr Guyz" ad and increasing the chatter about its campaign with an Instagram stories beta. The full-screen ad content, set to go live Thursday, gives tips on what viewers can do with frozen beef, tying into the brand's fresh, never-frozen beef messaging and the way its 30-second spot pokes fun at other brands that use the frozen stuff. The video plays so quickly on Instagram that it is nearly impossible to see the suggestions. But if one pauses the video, each idea freezes on the screen.

Wendy's other plans tied to the game include Facebook and other social partners, plus an "Othr Guyz" site. Its in-game spot, released Monday, is set to air during the first half.

Other brands are playing up their presence with the help of football stars. Pizza Hut reunited with former employee DeAngelo Williams, better known as a Pittsburgh Steelers running back, for its digital campaign tied to the big game. The pizza chain takes a humorous approach to its preparation for game day delivery, showing Mr. Williams timing a guy on "Pizza Combine" drills such as running to the door with a pizza box. Three videos are running on YouTube and Pizza Hut's social channels, and being distributed and promoted by Onion Studios. It is the pizza chain's first partnership with the humor brand's studio arm. Pizza Hut has said it added thousands of workers to help ensure it can, well, deliver well during the Super Bowl. It predicts it will sell more than 2 million pizzas on Super Bowl Sunday.

Skittles, meanwhile, turned to retired Seattle Seahawks star and longtime Skittles fan Marshawn Lynch for its digital push leading up to the Super Bowl. The Wrigley brand, which is an official NFL sponsor, sent Mr. Lynch to Houston, Scotland, to talk to locals before the game, which takes place in Houston, Texas. His video has had well over 400,000 YouTube views without paid support, largely driven by earned-media coverage from outlets including ESPN, Mashable and Breitbart. The video comes from Olson Engage, in collaboration with AKA Media and DDB Chicago. Skittles also has a spot during the game, from adam&eveDDB.

Meanwhile, Snickers announced the lineup for its 36-hour livestream that leads up to its live commercial during the third quarter of Super Bowl LI. Adam Driver, who is set to appear in the spot itself, is not a surprise star for the livestream, which begins Thursday at 12 p.m. ET. Those who remember the candy brand's Super Bowl XLIV commercial might want to tune in Thursday to see Betty White. Others set to appear on the SNICKERSLive.com airing include WWE stars The Miz and Maryse, NFL wide receiver A.J. Green and YouTube stars Kandee Johnson and Tyler Oakley. The live stream concept comes from BBDO New York, the agency behind the commercial, and is being produced in partnership with Facebook Creative Shop. "We think our fans will instantly recognize we've put the same amount of time and energy into creating this 36-hour live experience that we regularly put into our 30-second commercials," Snickers Brand Director Allison Miazga-Bedrick said in a statement, calling the live stream "the cornerstone" of the brand's strategy to leverage its live Super Bowl ad.

TGI Fridays is upping its Twitter game in time to run a penny promotion tied to Super Bowl Sunday, which it said is both the busiest day for Twitter and for restaurant carryout orders. Fridays is now taking orders via Twitter, and will give an appetizer for a penny to anyone who tweets a football emoji at @TGIFridays on Sunday. Fridays said its Twitter ordering works through a partnership with Conversable. The promotion will end once 51,000 special codes have been redeemed. 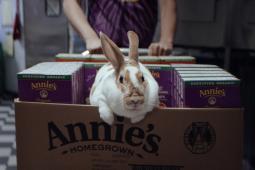 Annie's Homegrown, which markets macaroni and cheese and other products with bunny characters and in bunny shapes, hopes bunnies can win over people like the puppies in the Puppy Bowl have done. On Friday, the General Mills brand is introducing a Bunny Bowl, set to be live-streamed on its Facebook page from a miniature stadium in the Bay Area. The bunnies in the bowl come from Rabbit Ears Rescue and will be available for adoption after the event.

As Ad Age previously reported, Toyota is sitting out the Super Bowl this year and will not run a national spot. But the automaker is planning to make a targeted ad play during the game for its Mirai fuel cell vehicle. A new ad called "Daisy" will run in San Francisco and Los Angeles. The spot shows the Mirai depositing water onto a dying daisy growing out of a road. "Its only emission is water," states a voiceover.

Now for some non-Super Bowl news ...

People have been using ranch dressing well beyond the salad in recent years, for example, as a ketchup substitute on french fries, or drizzling it on hot dogs and hamburgers. Now Clorox Co. is making that idea the centerpiece of its new "Ranch Out" campaign, the first for Hidden Valley Ranch since Dentsu Aegis became the brand's agency last year. Marketing Director Brian Steinbach acknowledged the brand is taking its inspiration from consumers. The effort includes TV, digital, social media, shopper marketing and PR, including a #RanchOut hashtag.

Unilever brands have poked serious fun lately at Donald Trump and his administration from the seemingly safe distance of the U.K. First, Pot Noodle launched a video showing a multi-married Brit leveraging a hotel empire, inflammatory social media posts and reality TV fame into a job he's totally unqualified for – president of the United States. This is absurd, of course, because a Brit can't be POTUS. Then Dove launched a print campaign of "alternative facts," such as the assertion that its antiperspirant can raise your IQ by 40 points. Unilever CEO Paul Polman was a bit more conciliatory when asked on Unilever's fourth-quarter earnings conference call with media last week if he was worried about Mr. Trump's impact.

"We have been in the United States more than 100 years, and we always have been focused on making America great with our products," he said. Unilever products sold in the U.S. are produced here, he said, and its employees are American. He even said the rise in the U.S. stock market and consumer confidence since the election could provide a sales lift, and expressed hope for a new trade agreement between the U.K. and U.S. amid the former's Brexit from the European Union.

Speaking on Procter & Gamble Co.'s earnings conference call with media last month, Chief Financial Officer Jon Moeller said the company expects to fare well from tax reform being considered by various branches of the new Republican government. He also said China is such a strong market that it's hard to believe any change in U.S. policy under Mr. Trump could hurt. Mr. Moeller cited China's underlying growth, shifts toward more premium products and more of a consumption-driven vs. manufacturing driven economy, and move away from the "one child" policy as significant positives for P&G. "It's hard for me to believe as I sit here today that those positives would be overcome in any significant way by U.S. policy objectives," he said.

What was a novelty until a few months ago is fast becoming standard industry practice, as Coty's Rimmel has signed a male to pitch its products – 17-year-old YouTuber Lewys Ball in its recent #LiveTheLondonLook video. Mr. Ball joins James Charles, pitchman for Coty sibling CoverGirl, and Manny Gutierrez, pitching L'Oreal's Maybelline. The movement also has engendered some backlash: Conservative Christian blogger Matt Walsh wrote a post – citing Messers. Gutierrez and Charles, for The Blaze saying dads "can't expect our sons to become real men if we don't teach them how." Mr. Gutierrez, a.k.a. Manny Mua, responded by posting a text from his dad: "I've always been there for my son and will ALWAYS be there for him."

Citi is pumping up the volume on its music integrations. The bank just announced Citi Sound Vault, a live-music platform where cardmembers can attend exclusive performances and get backstage access. Upcoming concerts from Sting, Metallica and Beck will kick off the initiative, of which Live Nation is a partner. The new programming is the next step in Citi's long-standing strategy of offering more music to its members.