Lowdown: What Tom Brady Did for Olivia Munn and Proactiv | Ad Age
Skip to main content

Lowdown: What Tom Brady Did for Olivia Munn and Proactiv

Among Tom Brady's many amazing feats on Sunday was getting Aaron Rodgers' girlfriend into the game. Olivia Munn, who's been dating the Green Bay Packers' quarterback, starred in Proactiv's first-ever Super Bowl ad, a contingency buy that aired during the overtime spawned by the New England Patriots comeback.

The first overtime in Super Bowl history may have seemed totally unexpected. But not by Proactiv, said a spokeswoman in an email: "Proactiv strategically planned to air its branded spot during OT, as they knew it was going to be a close game, and it would be the perfect opportunity to showcase a more brand-focused approach vs. the traditional direct-marketing approach that's historically been the company's focus." A Proactiv spokeswoman did not disclose how much it paid Fox to run the ad, but said the cost of buying the overtime option was less than what it would have been to run an ad during the regulation game. Icon Media Direct handled the buy. The 30-second spot was cut from a 60-second version that had been running elsewhere in recent months. A bilingual version also aired on Fox Deportes during overtime. But neither would have run (such as during postgame) had it not been for the overtime, the spokeswoman said.

Student-loan refinancer Sofi, which also had an ad in the game, made a similar overtime option buy for the Super Bowl and "got a great price," a spokesman for the brand said in an email. "You can imagine what our group text thread looked like in the fourth quarter as the game got close!" he said. The ad was made in a week, in-house, using photos and videos members sent during the company's #WhyISoFi contest. It follows the brand's first appearance in the game last year.

For more on Fox's overtime windfall check out Ad Age's report from earlier this week.

With the Super Bowl over, Valentine's Day marketing is heating up. Zipcar is trying to crank up the passion early by promoting next weekend as"#MAKEorBREAKweekend." According to a survey by the car-sharing marketer, "more than half of Americans ages 18-34 feel that the first day or overnight trip is a good test of a new relationship." So Zipcar says it wants to encourage new couples to "put their relationships to the test with their first day or overnight trips together" and give them the chance to "make it or break it before getting into the potentially messy gray area of Feb. 14." The campaign is getting paid support on Facebook, where Zipcar is posing questions like the one below:

Meantime, Walker & Co.'s Bevel is launching a digital campaign today in advance of Valentine's Day featuring black gay couples celebrating love. "Valentine's Day is an opportunity to celebrate love," said Cassidy Blackwell, brand marketing lead for Walker & Co. "Our goal at Walker & Co. is to build brands for people of color, which in and of itself is a very diverse community." Besides its original subscription business for men's razors and grooming products, including an electric trimmer launched last year, the brand's expansion into outside retailers has continued with last fall's rollout to Amazon, after the brand moved into Target stores in 2015.

Who says you can't innovate around soap? Procter & Gamble Co. has just launched a new "Duos" form for its Olay, Old Spice and Ivory brands, and showering may never be quite the same. Liquid body wash has been edging bar soap out of showers for years. But Duos are something different, neither bar soap nor liquid. Kind of like mushy soap, or Play-Doh. Duos are described by Teen Vogue as a "souped up Scotch-Brite sponge" shaped like a Smucker's Uncrustable with a "cleansing dough" inside. It does away with the need for a loofah or washcloth, with packs containing a 30-day supply of the soapy dough. 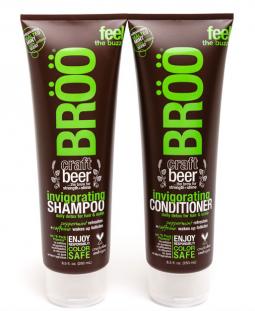 Men's grooming has been growing in recent years, though not as fast as some marketers would like, particularly in the U.S. as opposed to Europe. A new mashup with a faster-growing category -- craft beer -- can only help. The Broo Craft Beer collection of men's grooming products has made it big time now with a launch into Walmart stores and Walmart.com, Drug Store News reports.

Onto food marketing: A new Taco Bell ad looks to get real about morningtime. It kicks off like a typical breakfast product spot, with sunshine streaming through the bedroom window. There's even a jingle. But the guy who wakes up doesn't smell coffee brewing in his kitchen and isn't chipper. He must respond to work emails and deal with the typical morning moments that likely keeps him from eating a full breakfast. While at first the Taco Bell song sounds like a standard relaxing tune, it is not all bright and cheery. "When your morning is hell, just go to Taco Bell," the Mexican fast feeder proclaims in the song, which is also set to run on radio. Chief Marketing Officer Marisa Thalberg said the idea of the latest breakfast ad is one of realistic sincerity. "We're in on this with you, we get it," she said, noting that Taco Bell does not want to create a false representation of modern morning routines, such as sitting down and eating breakfast at the kitchen table in robes. The current spot ends with a mention of the chain's $1 grilled breakfast burrito. The work, from Deutsch, comes three years after the national launch of Taco Bell's breakfast menu. "There's a big group that's really open to it, it's just not top of mind yet," Ms. Thalberg said. "We haven't built a Taco Bell breakfast habit."

Restaurants including Panera and Chipotle are not the only brands playing up their use of fresh ingredients. After 2015's "All to the Table" campaign, Stouffer's is now using quick online videos to promote the idea of coming together over frozen lasagna. The campaign from Swift, "It's What's on the Inside that Counts," plays up the packaged food marketer's use of real ingredients by showing real families and friends. According to the Nestle brand, the three stories were unscripted. The people featured are a family in which the father recently returned home from military service; a trio of friends in New York including a married gay couple; and a family in which the wife and husband both work different shifts in an emergency room. The spots are currently running as pre-roll ads and will appear in 30-second versions as well. Plans include running on Facebook, Instagram, YouTube and the brand's site, plus additional content made for Pinterest and Twitter.

Fiat Chrysler -- which went all-in on its Alfa Romeo brand for Super Bowl -- is going country for its Ram brand. The auto marketer has struck a programming deal with Viacom's CMT network for a March 31 special called "CMT Hometown Heroes." It will feature Chris Stapleton, Darius Rucker and Brett Eldredge "as they make surprise returns to their hometowns to give back and perform for their very own hometown heroes," according to CMT.

Turning to financial services: Consumers can look out for a fresh campaign later this year from Fifth Third Bank. The Cincinnati-based regional lender has just tapped Pereira & O'Dell as its creative agency of record. The news follows Fifth Third's recent appointment of Empower MediaMarketing as its media agency of record. The 158-year-old bank, which worked with Leo Burnett on a campaign last year, will reveal new marketing, including TV, radio, digital and out-of-home, in May.

Lastly, MillerCoors -- which this week hired Publicis Media to handle media buying and planning -- is sticking with MDC Partners-owned Team Enterprises for experiential marketing and retail sampling. The agency, which has been with the brewer roughly two decades, kept the business following a review