The 2016 Summer Games are over, but a new winner in Olympics advertising is being announced Wednesday. Toyota's "Stand Together" spot showing people connecting across the globe won as the top TV commercial in USA Today Sports' first Ad Meter bracket for the Olympics. More than 145,000 votes were cast in the Rio Ad Meter Bracket from Aug. 12 through Wednesday morning.

In all, 32 TV spots competed to be named the top spot in the inaugural Olympics bracket-style tournament. The final round pitted Toyota against Hershey. Hershey's "Hello From Home" featuring gold medal gymnast Simone Biles (shot when she was still just a heavily-favored Olympic hopeful) came in second place.

Toyota won the Olympics-focused contest with its spot from by Saatchi and Saatchi, L.A., even though the automaker won't take over as a global Olympics sponsor until next year. It had to comply with strict trademark restrictions on Olympic phrases and imagery, as Ad Age previously noted. Hershey, meanwhile, used Olympics imagery in the runner-up commercial and other marketing as it is an official Team USA sponsor.

While USA Today has tracked the popularity of Super Bowl ads for 28 years, Rio marked the first time it had an Olympics Ad Meter. Adobe sponsored the Rio Ad Meter Bracket. Omnigon was the tech provider with its BracketPro product that let fans watch the commercials before voting. (And in case readers have already forgotten, the winner of this year's USA Today Super Bowl Ad Meter was Hyundai's "First Date" spot starring Kevin Hart.)

With so many commercials, it's hard to declare just one winner. Procter & Gamble Co. won the Olympics – or at least its two-minute "Strong" ad from Wieden & Kennedy did – according to ratings from Ace Metrix, which runs video ads past its online panel of consumers. Specifically, the ad in the long-running "Thank You Mom" campaign, which had run online since April, won on the Ace Metrix "Breakthrough" measure, which combines scores for likeability and attention and measures ability to break through clutter, according to the firm. Dick's Sporting Goods 60-second "The Contender" from Anomaly took second (silver), while Samsung's 1:40 mashup of national anthems "The Anthem" from Leo Burnett took the bronze from the survey panelists. On an aggregate basis across all their brands and ads – the decathlon of sorts – Nike, Dick's and P&G scored best overall among Olympic video ads in Ace Metrix Breakthrough scoring.

And speaking of sports, P&G's Old Spice has signed Denver Broncos linebacker Von Miller to join the line of football player/pitchmen that includes Isaiah Mustafa and Terry Crews as an Old Spice guy. Mr. Miller, who was Most Valuable Player in Denver's Super Bowl 50 victory in February, will be the face of the 2016 NFL campaign for Old Spice.

Football season also means more ad work for retired gridiron stars, like Howie Long. The hall of famer and Fox football analyst provides the voice-over for a new ad for the American Freedom Foundation, a support and advocacy group for veterans. The video by WPP's Cavalry aims to educate employers about how the skills that military veterans have translate into the civilian working world.

Meanwhile, Jon Gruden is promoting Hooters as a place for what might be unexpected fantasy football draft parties -- women's leagues. The chain is promoting itself as a place for women to host drafts. A commercial shows a woman who seems to be confiding to her girlfriends about which date to choose: Tom or Aaron. She's actually talking about draft choices, and a Hooters Girl and Mr. Gruden help with her pick. Morrison, Hooters' ad agency of record, worked with the Atlanta division of the 4A's training program for junior talent to come up with the idea. Along with research that shows more women are watching professional football, Hooters cites data from the Fantasy Sports Trade Association that shows one-third of fantasy football managers last year were women.

In music news, fans bummed to miss Joe Jonas and rock band DNCE perform on Friday as part of the Citi Concert Series on NBC's "Today Show" can quit complaining and put on a VR headset. For the first time, Citi, which began sponsoring the concert series late last year, is offering its concert in virtual reality. The bank will be doling out 7,000 branded Google cardboard headsets to Citi cardmembers and NBC fan pass subscribers ahead of the event, and also providing 3,000 sets to in-person attendees at Rockefeller Plaza who may want to access post-show content. "We want to push the boundaries of the very meaning of access beyond attendance and as technology evolves, it's allowing us to do so," Jennifer Breithaupt, managing director, media, advertising and global entertainment, at Citi, said in a statement. Indeed, VR is one of marketing's hottest trends; Forrester Research predicts that 52 million units of headsets will be in use by 2020.

General Mills is being taken over by bunnies. First, the maker of Trix cereal held a rabbit showdown, in which people submitted videos of their furry friends' stunts. Submissions ended on Aug. 19, but you can watch the videos here. The day voting ended, its Annie's brand rolled out a digital brand campaign, "Organic for Everybunny," to show how the organic food brand will be popping up in new parts of the grocery store as it expands in categories such as cereal, granola bars, soup and yogurt --- all areas where General Mills has a strong conventional presence. The digital spots feature live bunnies in the store.

Annie's President John Foraker said the brand is "putting a stake in the ground and making organic more accessible for more people in the U.S." The campaign, said to be Annie's biggest campaign spending to-date, comes from The BellShop. 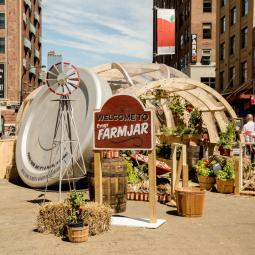 To celebrate the launch of Prego Farmers' Market sauce varieties, the brand installed a giant mason-style jar greenhouse at Chelsea Plaza in New York on August 17, 2016.

In other food news, Campbell Soup's Prego brand set up a unique spin on a mason jar to show off a new line of sauces sold in, you guessed it, mason jars. A one-day farm in a jar display in Chelsea Plaza in New York on Aug. 17 promoted Prego Farmers' Market, a sauce line made with tomatoes, herbs, and vegetables. The 450-square foot space was redone with a farm vibe, complete with hay and a tractor, and the chance to pick tomatoes. About 3,000 people were said to visit the spot during the one-day pop up. Agencies working with the brand include Zeno Group, Anomaly, MEC, RND Studios and Shaw & Co. Productions.