Wendy's has struck social media gold thanks to a Nevada teenager. If you haven't heard of #NuggsforCarter by now you must not be on Twitter. The hashtag began rising in popularity after high-schooler Carter Wilkerson innocently sent this tweet:

Yo @Wendys how many retweets for a year of free chicken nuggets?

Other brands jumped in…

We're in. How about you, @Amazon and @Google? #NuggsForCarter https://t.co/zi8FmD6Cf8

And pretty soon, the tweet was getting major media coverage, including in USA Today.

As of midday Wednesday, Mr. Wilkerson's screenshot of his exchange with Wendy's has garnered more than 2.6 million retweets, ranking it as the second-most retweeted tweet, according to Favstar. He only trails Ellen DeGeneres's famous Oscars selfie tweet from 2014, which has 3.35 million retweets. VML projects Mr. Wiklerson's tweet will eclipse Ellen's tweet.

Mr. Wilkerson looks like a budding marketing executive. He has seized on the publicity by launching his own website where he is selling apparel like #NuggsforCarter T-shirts. 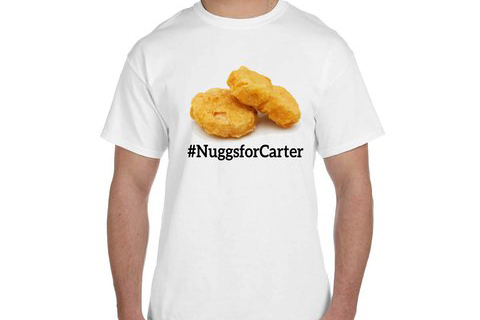 Carter has seized on the publicity by selling apparel like this T-shirt.

"Clean" ingredients have been big in food marketing, but not so much in toothpaste. Hello is out to change that with a campaign breaking today from its new (since January) agency 72andSunny, greenlighted by its new (since December) VP-Marketing Joshua Nafman. "An Inconvenient Tooth," a 1:45 animated film, follows "Toothy" as he reveals that some toothpastes have synthetic dyes, saccharin, and propylene glycol, which in its industrial grade form is used to de-ice airplanes and in its pharmaceutical form is used to help make toothpaste foam. Hello's products use none of those. Some do have fluoride, and in 2015 Hello settled litigation with Crest marketer Procter & Gamble Co. over its former "99% Natural" labeling of fluoride products. With this ad, part of an effort that will play out on Facebook, Instagram, YouTube and through various influencers, Hello steered clear of another biting controversy by not highlighting an ingredient in Colgate-Palmolive Co.'s Total toothpaste -- triclosan -- which the Food and Drug Administration is phasing out of soap over safety concerns. A spokeswoman said Hello preferred to concentrate on ingredients found across multiple brands. But the important thing is just talking about ingredients, said Mr. Nafman, citing research showing people think more about what's in their food, beauty and even cleaning supplies than their toothpaste.

OGX, the cornerstone of Johnson & Johnson's acquisition of upstart personal-care marketer Vogue International last year, has its first campaign from new social-creative agency of record Juniper ParkTBWA and media shop J3. "It's a true disruption in a very conventional category," said Alan Madill, chief creative officer of the Juniper ParkTBWA, aiming to inspire women to "fall in love with their look." The campaign will play out on Facebook and Instagram this spring and summer (notably, not YouTube, where J&J has paused spending over brand safety concerns). The launch video can be found on Vimeo.

It's not just the NFL and food marketers anymore -- Bayer, owner of Claritin, would also like you to send your kids outside to play. The brand cites an analysis by Columbia University finding that Americans spend 95% of their time indoors. In a new "Be an Outsider" campaign from Energy BBDO, Claritin notes that a children's dictionary today includes such words as "broadband," and "Wi-Fi" but not "dandelion" and "fern." The video asks people to try spending just an additional 1% of their time outside. Of course, if the kiddos and parents happen to catch a whiff of allergens and sneeze while they're at it, prompting them to try a market-leading antihistamine, well, all the better.

Sometimes a butter churn is just a butter churn, as Freud might have said, had he thought about it. That's true in the Spectrum cable markets of New York, Los Angeles and San Diego at least, and now also in Comcast Spotlight's Chicago market. Boy Butter's in-house ad featuring beefy apron-clad Seth Fornea churning butter, had been accepted to run last month on VH-1 in those Spectrum markets during Rupaul's "Drag Race." But Eyal Feldman, CEO of the lubricant marketer, got the impression that Comcast's legal department nixed his ad for Chicago. He complained bitterly about it in a blog post. Not so, according to a person familiar with the matter, who last week told Lowdown it was just a mixup over restrictions against local placements on Logo, which also carries the show. At any rate, Boy Butter is now free to churn away in Chicago too, according to Mr. Feldman.