US Open Sponsor AmEx Will Feature the Athlete in a Series of Digital Shorts
READ THIS NEXT
Chipotle cosmetics are back, and Elmo cleans up for SC Johnson: Trending

It's that time of year again. The US Open began serving up matches to spectators on Aug. 29 and sponsor American Express has created a "Pro Walk" in the fan experience portion of the stadium. The site replicates the player locker room and walk to court and includes virtual cameos from Pete Sampras and Monica Seles. Fans will also get earpiece radios with commentary during the matches. In addition, American Express also tapped Venus Williams for a series of digital short videos. Momentum Worldwide led the fan experience. DigitasLBi created the vignettes with Ms. Williams.

Timed to the US Open, AmEx is also airing new spots for its Blue Cash Everday card starring longtime spokeswoman Tina Fey. In one, Ms. Fey talks with comedian Michael Che over breakfast about possible ideas for TV shows.

In another 30-second spot, Ms. Fey negotiates onboard an airplane with a fellow passenger so she can eat the last goat cheese salad. In both situations, Ms. Fey uses her Blue Cash card to earn cash back. AmEx worked with Ogilvy & Mather New York on the campaign, a continuation of "Cash Backed," which began in February.

Lowe's is taking a page from Pixar's "Wall-E" and expanding its robot retail service program. The home improvement store chain began testing a similar robot, the OSHbot, two years ago at one of its Orchard Supply Hardware stores, and is now putting robots in 11 San Francisco Bay area stores. Called LoweBot, the robot will help customers with simple questions and scan inventory and data. Lowe's worked with Silicon Valley tech company Fellow Robots on the endeavor. 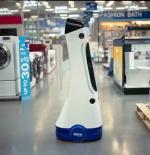 "For nearly two years, we've studied how robots in our San Jose Orchard Supply Hardware store can help customers more effectively navigate the store to find products and assist employees with inventory scanning," said Kyle Nel, executive director of Lowe's Innovation Labs, in a statement. "Now, we are taking those learnings and applying them to a focused group of Lowe's stores to see how the technology supports a broader customer and employee base."

Amid suffering sales and encroaching competition, Chipotle has a new strategy in its quest to woo diners—free food for kids. On Sundays in September, customers will receive a free kid's meal alongside the purchase of an entrée. The beleaguered restaurant chain also partnered with popular children's book "Dragons Love Tacos" to promote the effort with activity sheets.

Fresh on the heels of its "Made for Movers" campaign released earlier this month, footwear brand Rockport has named Brooklyn-based Madwell its advertising agency of record. In addition to creating the campaign, which showcased shoemakers and designers, the agency will lead Rockport's global repositioning. The 45-year-old retail brand, which has more than 500 stores, had been owned by Adidas but was purchased by investors for $280 million last year. The company recently named Shift Communications its public relations agency of record. 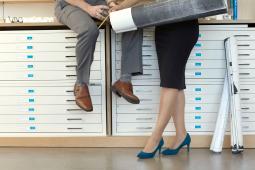 Rockport has a new campaign.

The world's biggest advertiser isn't nearly as big as it was, but it's spending more on advertising, at least proportionally. Procter & Gamble 's just-released annual report for the year ended June 30 shows the company spent $7.2 billion on advertising, up 0.8% from the prior year, which represents 11.1% of its $65.3 billion sales. That's the highest proportion in any of the six years reported, up nearly a full percentage point from two years ago, though up only slightly from the level for fiscal 2013. The numbers exclude beauty brands set to be spun off to Coty and the already-gone Duracell batteries and Iams pet food, all part of a divestiture program that culled 100 brands and helped reduce company sales by a whopping 21% since 2014's reported $83.1 billion. Showing how much P&G was spending on sloughed-off brands, which include traditionally heavier spending beauty brands, its pre-divestiture 2013 advertising spending was a company-record $9.6 billion and 11.6% of sales, vs. $8.2 billion and 10.6% of sales without them in current financial reporting. That suggests the brands P&G has shed accounted for nearly $1.4 billion of 2013 ad spending, or a whopping 16.4% of their sales.

Speaking of P&G, its alums are making marks, maybe even making P&G's marks, in other places too. Former P&G executive Jennifer Dauer became senior VP-strategy and growth for Cincinnati Children's Hospital Medical Center in 2013. She leads marketing efforts that included a new logo from WPP's Landor highlighted in recent ads from Omnicom's Barefoot-Proximity (both also work for P&G). One ad has kids talking about what the new logo looks like to them. But one thing resembles a bit – at least the two circles in the middle -- are two of P&G's modern moon logos. Looked at alternately, it's an adult and child reaching out for a hug forming two C's for Cincinnati Children's. A spokesman for Cincinnati Children's said Ad Age's query was the first they've heard anyone mention a resemblance to the P&G logo. A P&G spokeswoman declined to comment.

HotelTonight has hired chief marketing officer Ray Elias, who had been at StubHub for over a decade. Mr. Elias will be tasked with raising brand awareness and emphasizing mobile with consumers for the hotel bookings site, which recently announced it is profitable.

Jack Haber has retired as VP-global advertising and digital for Colgate-Palmolive after a 35-year career at the company. Mr. Haber, 63, who declined to comment, was the top marketing-services executive at the company, reporting to Chief Marketing Officer Mukul Deoras. He was general manager of U.S. oral care at Colgate when the company launched its highly successful Total line in 1997, which propelled Colgate to its first share leadership in U.S. toothpaste in over three decades at the time. Later, he was tapped by former Chairman-CEO Reuben Mark to become Colgate's first chief web officer in 1999 at a time when the company, like others, was under pressure from Wall Street to figure out its digital future. He moved to the global advertising and digital oversight role in 2008, helping usher in the multi-agency WPP Red Fuse that incorporated Y&R, Wunderman, VML, MEC and other shops.