Lowe's jumped into the NCAA action again this year by bringing a phony product idea to life during the Sweet 16, based on an ad that began airing earlier in the spring.

In the infomercial that follows, men search frantically under couches and with helicopters for their lost cats while coping with angry and distraught significant others. "There's got to be an easier way to find my cat," says one man, when the glow-in-the-dark cat hat is introduced. The ad boasts about the hat's state-of-the-art technology and fashionable styles like "The Henchman" and "Bespoke Pilgrim."

The video, created by BBDO, New York, debuted online last Thursday coinciding with the start of the Sweet 16. The first 2,250 responders on the video's microsite have a chance to receive a free cat hat.

The original TV ad, called "Glow-in-the-Dark Cat Hat," was part of the Lowe's "Build Your Home Improvement Confidence" campaign, as part of its sponsorship of the NCAA men's basketball championship.

Lowe's spun it off into an online video after noticing an uptick in social chatter when the spots aired. 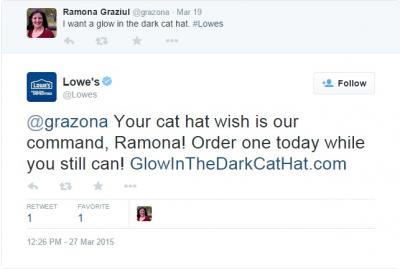 "It was so ridiculous that people were like, "I wish I had one of those things for my cat,'" said Brad Walters, director of social media at Lowe's. "It was something silly that really caught their attention. We said, 'let's act nimbly and parlay this into a bigger story.'"

A year ago, the home improvement retailer leveraged the Final Four by revamping a spot about falling tiles after fans began comparing it to their busted brackets on Twitter.

The strategy prompted Lowe's to pay closer attention to social conversations during March Madness this year in search of real-time marketing opportunities.

"[It] is a really fertile opportunity for us to be a part of those conversations in a way that is both relevant to our brand but also relevant to the sport," said Mr. Walters.

Lowe's also responded to another ad in this year's spring campaign, in which a man attempts to fold a fitted sheet, with an instructional Vine video on the proper folding technique.

The brand's other social efforts around March Madness include "Super Fan Tips," which pair basketball vernacular with home improvement. For example, phrases like "throwing up the bricks," "dominating in the boards" and "let's hit the paint" apply to both spaces. Lowe's is leveraging the phrases through a series of images and GIFs, such as a man biting his nails through work gloves during a close game, or "nail biter." The ads are being promoted through paid media on Twitter and used in Lowe's real-time engagement.