Retailer Has Carried Trump-Brand Merchandise, Featured Mogul in Ads
READ THIS NEXT
The Week Ahead: Netflix reports earnings and brands navigate Inauguration Day 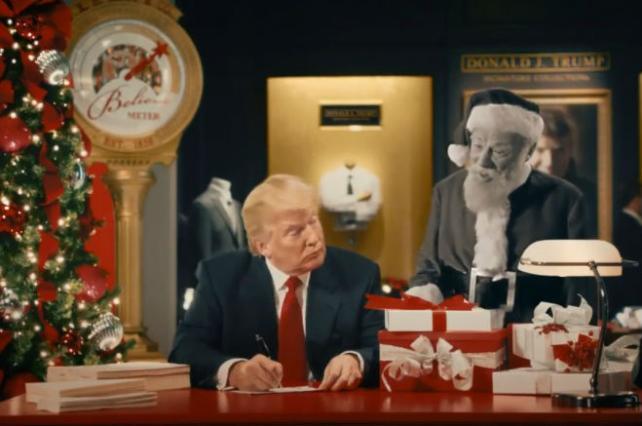 "In light of statements made by Donald Trump, which are inconsistent with Macy's values, we have decided to discontinue our business relationship with Mr. Trump and will phase-out the Trump menswear collection, which has been sold at Macy's since 2004."

When Mr. Trump announced his presidential candidacy last month, he accused Mexican immigrants of bringing drugs and crime to America and called them "rapists," among other disparaging comments. "Some, I assume, are good people," he added.

Hispanic shoppers are a growing focus for Macy's and other retailers as their buying power increases. The department-store chain has recently shifted more of its merchandising and marketing efforts toward Hispanic consumers with exclusive collections like the Thalia Sodi line -- aimed at Hispanic women -- as well as digital marketing and bilingual signage.

The break-up follows public pressure to "dump Trump" through a petition on MoveOn.org, which currently has more than 730,000 signatures. This isn't the first time Macy's has been urged to end its relationship with Mr. Trump. The current petition has existed since 2012 when it was organized by Angelo Carusone of progressive group Media Matters. It calls out Mr. Trump for making sexist comments, being a hypocrite for manufacturing products in China while complaining about shipping jobs overseas, and accusing President Barack Obama of being born outside of America after his 2012 re-election, among other issues.

This time, it seems, Mr. Trump went too far.

"He stepped over the line," said Michael Stone from Omnicom's Beanstalk, a brand licensing and marketing agency. "[Macy's has] a large Hispanic customer base, which they cherish. And they're telling their customers: 'We don't endorse this behavior.' ...The Donald Trump brand is a very successful brand at Macy's. This is a big deal for them to pull out."

The retailer has made it clear that it stands with the Hispanic community on this issue.

"Macy's is a company that stands for diversity and inclusion. We have no tolerance for discrimination in any form…" said Macy's in a statement. "We are disappointed and distressed by recent remarks about immigrants from Mexico. We do not believe the disparaging characterizations portray an accurate picture of the many Mexicans, Mexican Americans and Latinos who have made so many valuable contributions to the success of our nation. "

Following Macy's announcement, Mr. Trump issued his own statement that said he chose to end the relationship with the retailer: 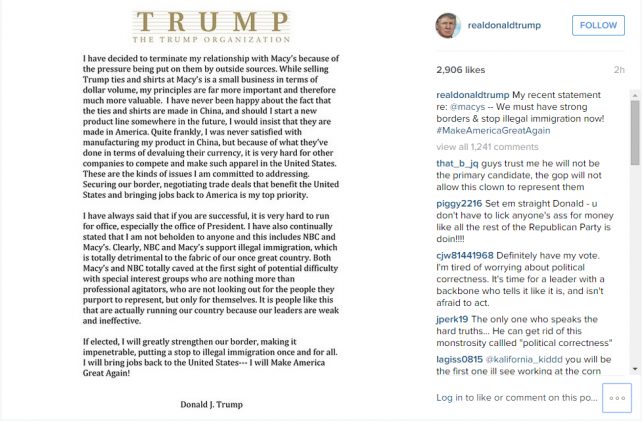 He also took to social media and asked people to boycott the department-store chain.

For all of those who want to #MakeAmericaGreatAgain, boycott @Macys. They are weak on border security & stopping illegal immigration.

In addition to selling Trump-brand merchandise, Macy's has previously featured "The Apprentice" star in ad campaigns, including a 2012 holiday spot.

NBC and Spanish-broadcaster Univision also cut ties with Mr. Trump in light of his remarks, Bloomberg reported. The networks will no longer air the Miss USA and Miss Universe Pageants, which Mr. Trump produces. He filed a lawsuit against Univision for dropping Miss USA.