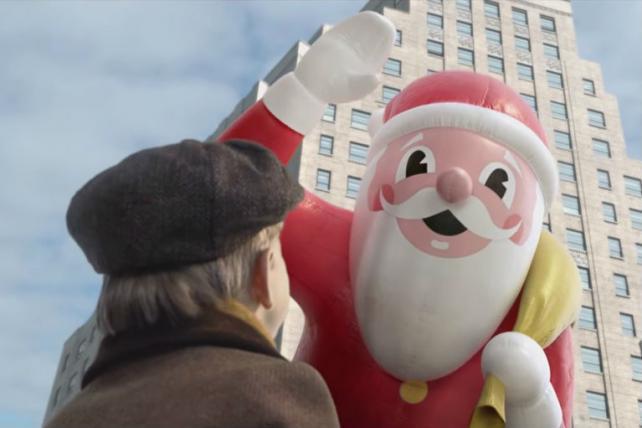 When 50 million viewers tune in for the annual Macy's Thanksgiving Day Parade this year, they'll also catch the department store chain's first commercial dedicated to the event, now in its 90th edition. As part of its holiday campaign, Macy's is airing a 60-second standalone TV spot, "Old Friends."

In the spot, a young boy sees the Santa Claus balloon wink at him as he watches the parade in Manhattan in the 1920s. As the boy ages into a man, he continues to watch for the Santa float at every parade until one year, the man is missing. The Santa breaks way from parade handlers to find the man, who is now much older and sitting at home. The two share a connection before the Santa floats back to the parade.

"We know from communications with our customers and research that Macy's is a brand that brings friends and family together and we really took that idea and that insight and that's what put us on this journey to create this commercial," said Joe Feczko, senior VP- Macy's integrated marketing. He noted that though the spot was created just for the 90th anniversary, Macy's may use it, with a few tweaks, in future marketing.

The 728-unit chain worked with BBH New York, which it tapped in the spring, along with Figliulo & Partners for its holiday marketing. J. Walter Thompson had formerly handled holiday duties for Macy's for the previous eight years. This is also the first holiday season for Macy's new chief marketing officer, Richard Lennox, who was hired in August from Toys R Us.

"Old Friends," which was directed by Noam Murro, will run as a 90-second video online, and air on TV in 30-and 60-second versions from Nov. 24 through the end of the holiday season. Macy's plans to highlight the clip in its social network feeds.

"Everyone you meet has a parade story, it's intimate and emotional for them," said Amy Kule, group VP- Macy's parade and entertainment group. "The spot we created does tell that story and an individual story of how the parade is so meaningful to absolutely everyone who's watched it."

Macy's is also introducing the Macy's Parade Time Traveler app this year, where shoppers can view virtual balloons from seasons past in a "Pokémon Go" style reality. Consumers can also download Macy's emojis and stickers.

Macy's spent $220.3 million last year on measured media in the U.S. between November and December, according to Kantar Media. The $27.1 billion chain, which is the third largest marketer in retail after Amazon and Walmart, according to Ad Age's Datacenter, expects to unveil more of its holiday campaign later this month.

Like many department stores, Macy's has been facing sales declines, recently reporting a 3.9% drop in second-quarter net sales to $5.7 million. Earlier this year, the retailer said it will close 100 of its stores by early 2017. Macy's plans to report third-quarter sales next week.