Mall tenants had an out when giants like Macy's left. Now landlords bar the door | Ad Age
Skip to main content

Mall tenants had an out when giants like Macy's left. Now landlords bar the door 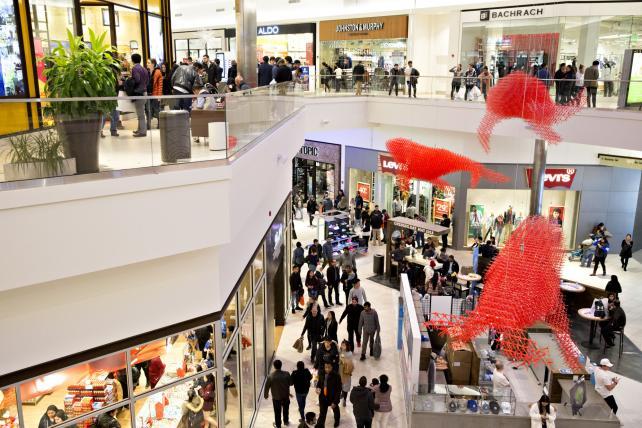 The only thing more dangerous for America's malls than a string of apparel-chain bankruptcies is when the trouble hits department stores.

Retailers like J.C. Penney Co. and Macy's Inc. are considered "anchors" that keep malls humming and foot traffic flowing. They're so important to the ecosystem that smaller tenants may refuse to set up shop without a promise that the anchors will stick around: Many leases include so-called co-tenancy clauses that let them cut and run or pay less if those key tenants depart.

Now, many landlords are pushing to eliminate or narrow the escape clauses in the wake of mass department-store closings. That means less flexibility for the remaining tenants.

"Most retailers based in a mall do live or die based on an anchor," says Andy Graiser, co-president of A&G Realty Partners, a commercial real-estate adviser. "Certain retailers are going to have a risk if certain anchors go away."

The past couple of years have brought hundreds of department-store closings. This is the result of of liquidations (Gordmans and Bon-Ton Stores Inc.), restructuring by struggling chains (Sears Holdings Corp. and J.C. Penney) and pullback by relatively healthy operators seeking to downsize their store presence (Macy's, which is closing underperforming stores).

While retailers are still flocking to the high-income "A" malls that make up about a third of enclosed centers, lower-tier properties are often struggling to replace lost merchants, sometimes turning to non-traditional tenants such as urgent-care centers.

Landlords are now routinely pushing to chisel away co-tenancy provisions when leases come up for renewal, says Ivan Friedman, head of RCS Real Estate Advisors, a New York consulting firm. That wasn't the case even a couple of years ago.

That will have consequences, such as leading to fewer lease renewals, says Kent Percy, a managing director at consulting firm AlixPartners.

"They could lose the whole inside of the mall," he says. Percy and others did note that even robust co-tenancy clauses offered limited protection for tenants; landlords are inclined to push back on any legal lease-breaking, and the cost of battling them can be prohibitive.

Many of those interior tenants have already suffered mightily, leading to bankruptcies like Gymboree Holding and Rue21, which reorganized with fewer stores. Other merchants like Coldwater Creek didn't survive.

"We do have a limited number of co-tenancy provisions, but not to the level we would like," he says, in response to a question on whether the chain could use the provisions to close stores.

Tenants do have other options. They are negotiating for shorter leases and reduced rents. As a last resort, they can file for bankruptcy, allowing them to exit from leases without penalty.

They may also sign contracts stipulating an exit only if certain anchors leave, Graiser says. "The retailer may say, yeah, I'm OK if Bon-Ton leaves, I'm OK if Sears left, but I'm not OK if Macy's, Dillard's, Neiman Marcus or Nordstrom left," he says.

The definition of what constitutes a key tenant has changed, too. In some cases, it may be a dominant retailer, such as a big-box store, or a high-performing specialty chain.

Even so, landlords are going to remain under pressure, RCS's Friedman says.

"Everybody is closing stores, everybody is getting lower rents when they do their renewals," he said. And with the U.S. retail excess estimated at 25 percent, even after earlier shakeouts, "it's going to continue."

Even the departure of a weaker anchor can have a significant impact on its neighbors. Foot traffic in Buddy Kurzweil's wing of Paramus Park mall, located in Paramus, New Jersey, has declined by at least half since Sears closed in February, estimates Kurzweil, the owner of Buddy's Sports Corner. His shop occupies the spot just to the right of the sealed-off Sears entrance, now fronted by a noisy children's play area.

"They come down and all they see is empty stores and a lot of little kids screaming and yelling—that's not exactly conducive to business," Kurzweil says from behind the counter of the store he's occupied for a decade. His eight-year lease expired last year, and he's operating on an extension now. He says he feels uncertain after 45 years in the collectibles business that at one point included six locations.

While malls like Paramus Park struggle as shoppers flock to e-commerce, they also still face traditional competition—like the expanded Garden State Plaza less than 5 miles south. With a dense collection of shopping centers and malls, the area is a beacon for retailers in spite of local laws that force stores to close on Sundays. Many have opened multiple locations in the borough and have ranked them among among their top performers.

But today, the mall has numerous vacancies. It's added non-traditional tenants, like a dental office. A Stew Leonard's grocery store and a movie theater are slated to replace Sears, and a Uniqlo is moving in nearby, but Kurzweil says he doesn't know how many of their visitors will wander through the mall.

One Paramus Park merchant, Harry Mahtani, is considering getting out of the retail business as shopper traffic drops. He owns a namesake jewelry store that's near the mall's center, but in the same wing as the closed Sears store. He's also seen business slow at a location he operates at the Woodbridge Center Mall, about 35 miles to the south.