Don't look now, but summer is waning and football is coming, meaning NFL-themed marketing is underway. In this week's Brief, find out how Tostitos is trying to sell more chips in cities with teams and which new stadium has a very limited availability of Chick-fil-A chicken. But we begin with the latest Google Home integration...

For the lazy driver
Hyundai's luxury Genesis brand has teamed up with Google on some new voice-powered tricks that allow drivers to communicate remotely with their cars using a few spoken words. Via a Genesis app for Google Assistant, drivers can ask Google Home to remote start, lock or send directions to their car. The video below shows how it works, while also giving a plug to Hyundai's ad agency, Innocean.

Amazon's private label small but surging
Amazon's private-label program has been rising on the list of worries for marketers – particularly the idea that Alexa will automatically steer orders to them. A new report by online sales tracking firm 1010data shows reason for concern– but also how far Amazon has to go before its private labels pose threats akin to those of Walmart or even Kroger Co. Amazon Basics, the biggest private label, topped sales of $200 million in the first half, up 56% year over year. But compare that to Walmart and Kroger private labels such as Great Value and Private Selections, which are multi-billion-dollar brands, though the retailers don't provide precise numbers. Most Amazon private-label sales are in electronics, led by Echo, whose sales double year over year, according to 1010data.

Very superstitious
Frito-Lay is seizing on sports fan superstitions in an attempt to sell some more chips in NFL cities. Tostitos is dressing its bags in individual team colors as part of its new "Lucky Bags." Digital videos play off team traditions and game-day rituals, like the Mile High Salute in Denver, the blowing of the Gjallarhorn in Minnesota and the Lambeau Leap in Green Bay, which Tostito's refers to as jumping the "Lambeau wall." The trademark rights to "Lambeau Leap" are held by Robert Brooks, the former Packers wide receiver who invented the touchdown celebration. Tostitos wants fans to share their own rituals using #LuckyBags. Here's what we are watching: Tostitos sales in the cities of losing teams.

Chicken blackout
College football fans will be able to buy Chick-fil-A nuggets and other food at the two Chick-fil-A Kickoff Games being played at Atlanta's new Mercedes-Benz Stadium next month. But NFL fans who want chicken at the new home of the Atlanta Falcons during Sunday games will have to buy it elsewhere, even though there's a Chick-fil-A in the new stadium. As it does at all of its locations, Chick-fil-A is keeping the new store closed on Sundays. "Chick-fil-A restaurants can be found in a number of stadiums throughout the country. However, none of those locations are open on Sunday (it makes the chicken taste better on Monday!)," the company said. The Alabama versus Florida State game is being played on a Saturday (Sept. 2) and the Georgia Tech vs. Tennessee game is being played on a Monday (Sept. 4). Meanwhile, another local chicken chain, Zaxby's, recently became the official chicken of the Falcons for the next five seasons. But it doesn't have a shop in the new stadium, where sports fans are getting some pretty good deals when it comes to food pricing. Hometown company Coca-Cola is selling Coke and other soft drinks for $2 with refills available throughout the venue.

Taking on Etsy
After 75 years, Joann Stores is ready for a makeover. The arts and crafts retailer is updating its image in an attempt to appeal to the younger generations of its core customers—many of whom are as old as the company. A new mobile app, updated logo and fresh brand manifesto video, which celebrates the Joann's maker culture among both grandmothers and younger, tattooed hipsters alike, may help the company gain ground against Etsy, the Brooklyn-based craft marketplace. The 865-unit Joann recently acquired Creativebug, a subscription service of how-to video crafting classes.

Number You Need to Know
60% -- The percentage of marketers that commissioned influencers to make content in 2016, according to Forrester, which notes that 17% consider influencers one of their top three sources of content. 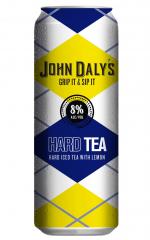 Would You Buy This?
Golfer John Daly has had a well-documented struggle with alcohol. But that is not stopping Four Loko maker Phusion Projects from partnering with him on a new line of drinks blending alcohol, tea, and lemonade called "John Daly's Grip it & Sip it."

Moves
Conagra Brands named DeLu Jackson to the newly-created role of VP of precision marketing. He was most recently VP-digital acceleration at Kellogg Co. At Conagra, he reports to Chief Growth Officer Darren Serrao. Chipotle Mexican Grill has hired its first chief communications officer. Laurie Schalow comes to the struggling Mexican chain, where she will oversee internal and external communications, from Yum Brands, where she was most recently VP-public affairs.