We're about a month away from Thanksgiving, which means it's time to discuss how much Black Friday still matters. One retailer that skips the busy day is doubling down on that decision. Plus, an Old Spice TV moment didn't exactly go over as planned, and Reddit buddies up with Patreon. But first, get ready for a diet-busting breakfast trio from McDonald's.

McDonald's admits it's losing market share at breakfast and now it's trying to woo diners with a decidedly not-low-cal trio. Triple Breakfast Stacks have two sausage patties, two slices of American cheese, bacon and an egg and can be served on a McMuffin, biscuit or McGriddles "cakes," as the company calls those syrupy-sweet sandwich rounds. The limited-time idea stems from seeing people order customized sandwiches and follows a Dunkin' sandwich with bacon, ham and sausage. Triple Breakfast Stacks don't come out until Nov. 1, though some McDonald's are offering them early. Executives teased new breakfast items on a conference call Tuesday, then Business Insider reported on Triple Stacks, and by Tuesday night the news was officially out. Suggested pricing wasn't immediately available.

Procter & Gamble Co.'s Old Spice made the leap from a September livestream to a 90-second ad finale to crown the winner of its Foam Zone online game show during Monday Night Football on ESPN. Numbers for the September livestream were pretty impressive, with more than 7.3 million views on YouTube, Twitch and Facebook and 126,000 chats over 48 hours, according to the brand. That was even before the contest made its way to TV with segments that included Oct. 8 and 15 primetime commercials on ESPN leading up to the Oct. 22 finale. One hitch: The final TV spot before halftime was followed by an interview between ESPN's Joe Tessitore and Jason Witten with Foam Zone host Anthony "Spice" Adams and Old Spice Foam Zone winner Audrey, which was widely described as awkward in social media and by USA Today's For The Win blog.

It's the fourth year that REI is running its OptOutside campaign, which includes the closure of its 153 stores on Black Friday as it promotes the outdoors. To encourage consumers to get outside, the Seattle-based retailer is investing $1 million in Nature for Health, an initiative with the University of Washington that studies the healing effects of time outdoors.

Meanwhile, big days for big holiday shopping seem to be losing some appeal. Just 44 percent of people say they'll shop on Black Friday as they did in the past, down from 47 percent in 2017, while 53 percent are still shopping on Cyber Monday, down from 57 percent in 2017, according to an annual holiday survey from Deloitte.

Reddit has made no secret of its plans to attract more ad dollars from Madison Avenue and the company now says it's created a path to attract new users to its platform. Already the third-most-visited website – Reddit sees more traffic than Facebook and Amazon – the company says it's partnered with membership platform Patreon to create custom sub-Reddits for fans to engage with their favorite creators. Patreon allows creatives of all types to ditch advertising and instead gain monetary support from fans who enjoy their work. Some popular Patreons capture $10,000 to $15,000 a month, plus do side deals with brands to promote products in a similar fashion to influencers. Popular Patreons such as Amanda Palmer already have their own Reddit pages. The social website believes it will see more original content and users as a result.

MillerCoors has hired Austin, Texas-based Preacher to help launch Saint Archer Gold, a low-calorie beer the brewer is positioning to take on fast-growing Michelob Ultra. Preacher will handle a campaign including TV, digital and out-of-home. The beer is a line extension the San Diego-based Saint Archer craft beer brand that MillerCoors acquired three years ago and tucked into its craft and import division, known as Tenth and Blake. Saint Archer Gold will debut next year in four test markets: Arizona, Indianapolis, Charlotte and Austin, Texas. If all goes well, MillerCoors could take it national.

This week, Lowe's is debuting its first military-focused national ad. The home improvement retailer plans to contribute nearly $1 billion to military families through its discount program, which recognizes employees who are in the military with special savings and discounts. More than 14,000 military members, military spouses, and veterans work at Lowe's, the company says. 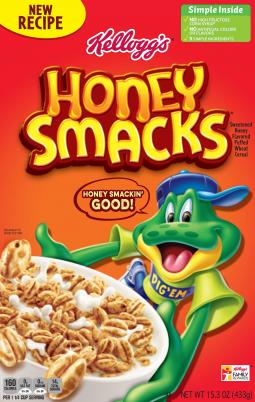 Honey Smacks is returning with a simpler recipe and in limited quantities in November after this year's outbreak of Salmonella Mbandaka infections linked to the Kellogg's cereal, which was voluntarily recalled. Production has been moved from an outside company to a Kellogg-owned facility.

A number of companies across industries have undergone a change in the top #marketing role this year. pic.twitter.com/wKANXTkqdx

There's a new top marketer at Rent the Runway, the online apparel renting site. Gabby Cohen has joined the New York-based company as senior VP of communications and business development. Cohen, who was formerly head of communications at SoulCycle, will oversee public relations, influencer, experiential and social partnerships. Starting at the end of this month, she's the first to hold the position at the nine-year-old brand.

Universal Music Group named Jaime Weston to the newly-created role of exec VP of consumer marketing. She reports to Dave Rocco, exec VP of creative. Weston was most recently senior VP of marketing for the National Football League.

Dorcas Reilly, who created Green Bean Casserole in 1955 while working in Campbell Soup's home economics department, died at the age of 92. The dish was originally called "Green Bean Bake" and according to the company Reilly "would often share that the first time she made her famous recipe, it did not receive the highest rating in Campbell's internal testing."