READ THIS NEXT
Toyota rethinking Toyotathon, Lexus December to Remember

The beauty industry might have finally cracked the mass-personalization code, thanks to L'Oreal. Find out below how the marketer's Lancome brand is customizing its products and getting rave reviews. We also check in on the health of rapper Lil Xan, who has a Flamin' Hot Cheetos problem. Also, IHOP—not IHOB— has started marketing beer. Kegs and eggs, anyone? But first, a foray into facial hair.

Beard-care products are a niche-inhabited by startups like Dollar Beard Club. And they're an unpleasant reminder to Procter & Gamble Co. about a stubbornly persistent tonsorial trend afflicting Gillette. But now sibling Old Spice is embracing "beardness," and some of the tactics that go with it, by launching a new Beard Collection exclusively on Amazon. To pitch the launch, Old Spice has enlisted two bearded football players from its hometown—the Kelce brothers: former University of Cincinnati football players turned pro Travis (of the Kansas City Chiefs) and Jason (of the Philadelphia Eagles) star in digital ads.

There's also "The Old Spice Guys' Grooming Guidance Guide for Guys with Beards" available across the brand's social channels. And an Old Spice Bearded Quartet answered questions about grooming, or anything, for a day to back the launch. Wieden & Kennedy is behind the marketing.

This long day of serious song beardness has come to an end. Thanks for playing, tweeting, listening, and believing in beards. pic.twitter.com/rcCmIfBvz5

Eating too many Flamin' Hot Cheetos could land you in the ER—at least according rapper Lil Xan. The rapper claims the snack food "ripped something in my stomach open," causing him to puke blood, according to an Instagram video he posted.

Just wanna let everyone know that I'm good,healthier then I've ever been and ready to kick of my third Tour in NY ina couple days ! Also be careful,Hot Cheetos are one hell of a drug aha ! 💔 love you all ! 💔"Be Safe" Coming soon !💔💔💔💔

The incident is getting a ton of media coverage. But thankfully for PepsiCo, the attention comes after it closed its limited-time restaurant, The Flamin' Hot Spot, which was dedicated to Flamin' Hot Cheetos and operated in Hollywood Hills, California from Sept 18 to Sept. 20. Then again, is anyone really surprised that downing too many of these things will probably make you sick?

Here is what a spokeswoman from PepsiCo's Frito-Lay says: "Flamin' Hot Cheetos meet all applicable food safety regulations, as well as our rigorous quality standards. That said, we realize some consumers may be more sensitive to spicy foods than others and may choose to moderate consumption or avoid spicier snacks due to personal preference."

L'Oreal's Lancome brand is diving even deeper into niches with Le Teint Particulier, which analyzes skin shades to create customized single-batch products with around 72,000 permutations made on-site at retailers. Evercore Research, after conducting a focus group with customers, found rave reviews and concludes this may be the first mass-personalization effort by the beauty industry "that seems commercially viable." There's a long history of trying, going back to P&G's Reflect.com haircare launched in 1999 and folded years later. More recently came MatchCo mass-customized makeup, acquired last year by Shiseido more as a research tool than a consumer brand.

Trend-wise, Rihanna's Fenty Beauty with its 40 shades of foundation made a big splash last year, prompting competitors like CoverGirl to follow suit. But none can quite deliver 72,000 shades like Lancome, and Evercore says that could create loyalty in a fickle industry, even among consumers who don't use makeup routinely, because most women it interviewed found matching off-the-shelf foundations to their complexions "challenging."

Anyone wondering about the personal hobbies of Goldman Sachs staffers is finally in luck. (Seriously, does anyone care?) The storied financial institution debuted its own Instagram account, @goldmansachs, this week. The handle will feature Q&A style talks with Goldman Sachs guests, a "Humans of New York"-style series on employee hobbies. That's not all, though. The account will also include snapshots of the bank's notable research findings, which might actually be useful. The Instagram launch trails by seven years the brand's 2011 launch on Twitter.

All the better to scare you

Party City is utilizing Apple's new AR technology for early Halloween shoppers. Consumers can test out the retailer's rat-eating zombie head (a popular current item) to see how it looks on the front stoop. Party City worked with Hill Holliday on the offering. Maybe Pat Duncan, senior VP of marketing and chief digital officer at Party City, says it best: "Getting a sneak peek at how an evil zombie baby will look in your foyer is just the beginning." Spooky.

A dash of math

Uncle Ben's is incentivizing kids to skip their homework. Yes, really. The brand's pitch is that children can learn math and communications skills by following recipes for stuff like one-pot chili and rice -- which, of course, calls for Uncle Ben's rice. Under the program, which is called the "Homework Pass Challenge," teachers are encouraged to send kids home with recipe packets that include Uncle Ben's Ready Rice, to have them cook at home. The Mars brand has started to promote the latest push with actress Anna Faris and says a dozen schools have signed on. How this affects standardized test scores remains to be seen.

I partnered with Uncle Ben's to give some kiddos the BEST surprise. We're helping schools across the country swap out homework for cooking as a family for a whole week. Head to https://t.co/QOkPgVw9hl to hear more on the Homework Pass Challenge! #ad #BensBeginners @UncleBens pic.twitter.com/XBX7WiiNvr 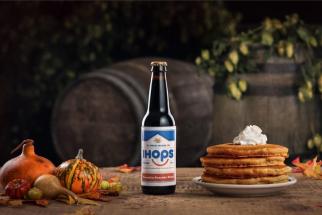 Yes, there's an IHOPS pancake stout beer. No, it's not served at IHOP. IHOPS Pumpkin Pancake Stout (get the pun?) is the latest sign of pumpkin overload or pumpkin joy, depending on your reaction to the flavor's ubiquity. The stout is only being released in the New York tri-state area at bars and festivals in September and October. It's brewed in partnership with the pancake chain by Keegan Ales and is made with hops, pumpkin puree, pancake batter, maple syrup and lactose sugar. (Keep the the Pepto handy.)

61 percent: The share of millennials planning to shop Walmart this holiday season, compared with 60 percent who plan to shop Amazon, according to a recent retail report from market research firm ThinkNow.

last night i had cereal with milk for the first time. life changing.

Former PepsiCo marketing executive Kristin Patrick has been hired by Sugar23, a production company formed in 2017 by Michael Sugar, the producer of films such as "Spotlight." Patrick left PepsiCo in July after overseeing PepsiCo's licensing and content businesses, including its in-house Creators League Studio. Sugar23 hired her to start a new brand incubator and investment division. The unit, called Sugar23 Global, will offer services like research and analytics, brand strategy and investment, content production and product design, according to a press release. Sugar23 has an existing talent management arm with clients including Steven Soderbergh, Robin Wright and Richard Linklater.

Petco has hired Tariq Hassan as its new chief marketing officer. Hassan, a marketing vet most recently at Bank America Merrill Lynch, will be responsible for helping the pet brand evolve for modern consumers, who are facing a plethora of new options in the pet care and pet food category.