Bob Dylan has a new whiskey brand—but he's gotta defend the brand name in court. More on that below, along with details on Oprah's latest Kraft Heinz collaboration and what major U.S. beer brand is now bigger in China than it is in America. Also, find out how major cosmetics brands are having a hard time keeping up with the Kardashians. But first, some trademark news that might make you L.O.L.

If you thought all those texting acronyms couldn't be yanked out of the digital commons and trademarked, forget that. Procter & Gamble Co. has filed for trademarks on household and personal-care use of LOL, WTF, NBD and FML. FWIW, there's no indication products bearing those names exist yet, and P&G doesn't have trademark approval. The U.S. Patent and Trademark Office has sought clarifications from P&G, which has until January to respond. 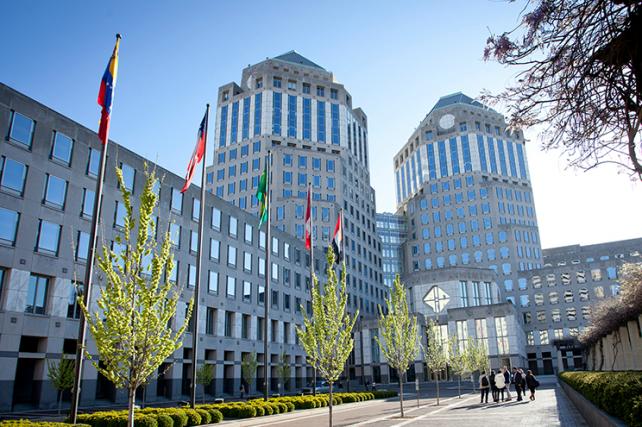 Precise uses remain TBD, as P&G declined to provide TMI. But competitors who might want to use these acronyms may now face FOMO. BTW, despite those old untrue P&G-Satanism rumors, NBC reported in 2012 that LOL does NOT secretly stand for "Lucifer Our Lord."

This Bud's for China

Budweiser might be stuck in a long-term sales slide in the U.S.—but the King of Beers is surging in China. In fact, more Bud is consumed in China today than in the U.S., according to a new report from Rabobank citing figures from GlobalData. An AB InBev spokeswoman confirmed the accuracy of the data. 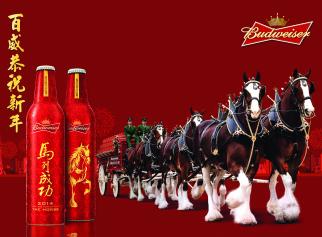 Turning the brewer's classic American brands into international powerhouses has been a priority ever since Belgium-based InBev acquired St. Louis-based Anheuser-Busch in 2008, creating AB InBev. Rabobank credits the brewer's multichannel strategy in China, including distributing beer through modern retail stores like Hema and Super Species, as well as its advertising on platforms including Weibo.

There was long that lingering suspicion that in the circular logic of social celebrity, the Kardashians were famous only for being famous. Well forget that. They now can be famous for wrecking much of the mass cosmetics business last quarter. Tarang Amin, CEO of cosmetics marketer E.L.F., earlier this month cited "growth of mega-influencer-driven brands" in part for somewhat disappointing top-line results.

Without naming names, the two top mega-influencers in cosmetics over the past 18 months have been Kylie Jenner (Kylie Cosmetics) and Kim Kardashian West (KKW Cosmetics). Coty (CoverGirl) and Revlon posted declining North American mass cosmetics sales last quarter, and while they didn't blame the Kardashian-Jenner industrial complex, it probably took a toll. Forbes recently pegged Jenner's net worth $900 million, $800 million of which stems from the cosmetics. She may be having a bigger effect on packaged goods than sister Kendall did with that Pepsi video.

Knockin' on the courtroom door

Like many celebrities, Bob Dylan has his own liquor, a whiskey brand named Heaven's Door that he launched earlier this year. 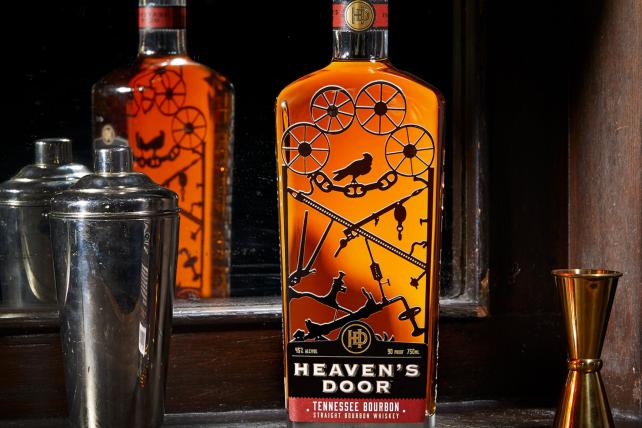 But now the folk singer must defend the brand name from a legal challenge brought by Heaven Hill Distilleries, which says the name sounds too similar to its Heaven Hill whiskey. The Louisville Courier Journal has more on the trademark infringement lawsuit that was filed last week in federal court.

Olive Garden's Never Ending Pasta Pass—weeks of all-you-can-eat pasta, plus soup or salad and breadsticks for about $100—goes on sale Aug. 23. This year, apparently in honor of America's, ahem, growing appetite for the offer, there's an even more gluttonous version. Olive Garden plans to sell 1,000 52-week passes, for $300 each plus tax. The more traditional Never Ending Pasta Pass, which lasts eight weeks, is $100 plus tax. And there are more of those—23,000. Last year, Olive Garden offered 22,000 of the $100 eight-week passes, in honor of the 22nd anniversary of its Never Ending Pasta Bowl special, as well as 50 trips for two to Italy for $200.

KFC enlisted its brawniest colonel yet to promote the new Double Crispy Colonel sandwich, which is its Crispy Colonel sandwich with a second fried chicken fillet. Hafþór Júlíus Björnsson, the world's strongest man, apparently set a world's record for pulling the most chicken sandwiches at one time in an arm-over-arm pull by dragging a giant box of sandwiches, weighing more than 700 pounds, across a floor. Of course, KFC had him dressed as the chain's founder and captured the feat on video.

Froot Loops, which has been trying to make the slogan "Whatever Froots Your Loops" happen (good luck), has a new fashion line: 10 items from co-collaboration company Awaytomars. The items, priced from $30 (a Wild Berry Froot Loops beanie) to $185 (a Toucan Sam-inspired dress), follow last year's $449 Froot Loops bike from State Bicycle Co. 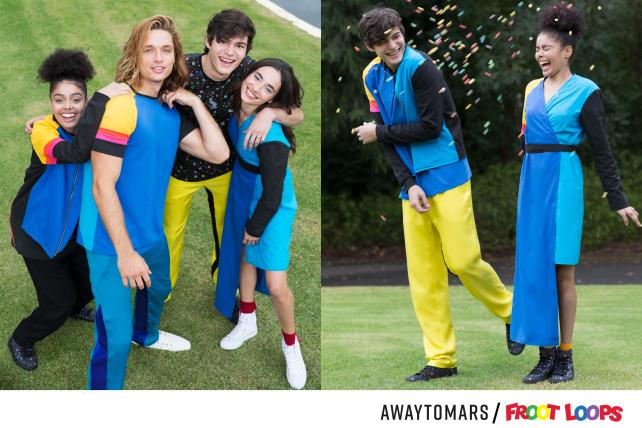 Froot Loops has a limited-edition collection of apparel and footwear in a collaboration with AWAYTOMARS, with 10 items priced at $30 to $185.

The fashions come from nearly 700 designers who participated in Awaytomars' co-creation model to fashion the line of hats, shirts, sneakers, a jacket and a dress. After the designs were decided upon, the company made prototypes and final pieces.

For all the Cheez-Its

Speaking of Kellogg brands, the postseason game between teams from the Big 12 and Pac-12 conferences that has been the Cactus Bowl is now the Cheez-It Bowl. Cheez-It is now the title sponsor in a multi-year deal with the Fiesta Bowl organization, which also runs the PlayStation Fiesta Bowl.

Cheez-Its becomes the exclusive partner in the savory snacks and crackers category as part of the deal, which also covers digital and social media, content, in-stadium exposure, sampling and activations at the game and at other Fiesta Bowl organization events. Cheez-It also gets a float and custom balloon in the Fiesta Bowl Parade. The first Cheez-It Bowl at Chase Field in Phoenix is set for Dec. 26.

Meanwhile, the Bahamas Bowl, a typically low-profile game played in mid-December, has struck an unusual title sponsorship. Elk Grove Village, a suburb of Chicago, signed a $400,000 naming rights deal with the bowl, which will now be known as the "Makers Wanted Bahamas Bowl." As Crain's Chicago Business reported, makers wanted is the marketing tagline the suburb uses to draw companies to its business parks. 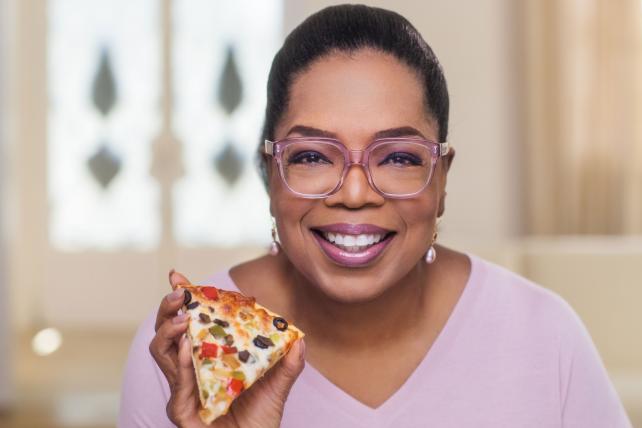 O, That's Good! pizza is the latest product from Kraft Heinz and Oprah Winfrey. There are four frozen varieties, pepperoni, five cheese, supreme, and fire roasted veggie, with a suggested price of $6.99.

64: The percentage of U.S. adults that have shopped at Walmart in the past three months, according to Packaged Facts.

Theo Chocolate named Jason Harty as CMO and general manager of consumer direct. Harty was most recently CMO of Nourish Snacks and previously worked on brands including Justin's Pretzel Crisps and Vitaminwater. The CMO spot was vacant after Co-Founder and CMO Debra Music decided to leave earlier this year after more than 13 years with the company.