READ THIS NEXT
Cheetos enlists Bad Bunny to inspire people to ‘deja tu huella,’ or ‘leave your mark’

Chobani is eager to shake up the yogurt category. Again. After becoming the No. 1 selling yogurt brand solely with Greek-style yogurt, it's now going after yogurt eaters who just aren't fans of Greek and those who want a little variety. Chobani Smooth is the company's first take on classic-style yogurt, pitting Chobani against the mainstay products of competitors such as Dannon and Yoplait. The new low-fat line, which Chobani said has 25% less sugar than some traditional yogurts, is being sold in packs of two 5.3-ounce containers for $1.79, with side-by-side packaging meant to stand out in the already crowded dairy section. Chobani plans to promote Chobani Smooth with targeted couponing, digital, social, and in-store marketing.

Christmas in June? That's the Facebook way. The social media giant has rolled out a host of updates to its existing ad platforms in time for marketers to take advantage of this holiday season. Brands can now include videos and visuals, like prices, in Facebook's Dynamic Ads, which had formerly only showcased products like a catalog. Facebook also introduced household ad targeting.

This Isn't Your Old TV Dinner

TV shows are certainly hungry for viewers. Partnering with meal kit delivery companies has become the latest on-trend way for networks to give viewers a, well, taste of their series. TNT is working with Chef'd on recipe kits inspired by its new summer dark comedy, "Claws," and "Will," about the life of young Shakespeare. The menu, prepared by celebrity chefs Brooke Williamson, winner of last season's Bravo's "Top Chef," and James Beard Award-winner Jamie Bissonnette, includes curried lamb pie with sweet potatoes and peas and grilled shrimp coconut farro with charred corn and herb salad. The meal kits will be available to order from July through September. FX ran a similar promotion this spring for the third installment of "Fargo" in partnership with Home Chef.

With Blue Apron's pending IPO losing steam --- its pricing range was cut by a few bucks per share after the company's roadshow and following Amazon's announcement it plans to buy Whole Foods -- there are plenty of signals that the meal kit delivery concept has a long way to go to reach higher household penetration. Only roughly 5% of U.S. households use meal kit delivery services, The NPD Group said. One big barrier to entry, for now, is price, which NPD and others expect to decline as the kits become more ubiquitous. Plus, mainstream grocers are stepping up their prepared food and delivery games as they try to remain competitive, which puts pressure on some of the upstart companies trying to gain share. "It makes perfect sense that as online grocery shopping grows it will drive the adoption of meal kits," Darren Seifer, food and beverage industry analyst at The NPD Group, said in a statement. "Online grocery shoppers can save time by not having to search through multiple websites, and they both work hand-in-hand in meeting the consumer's need for convenience with the delivery of a fresh meal they can prepare at home."

Snickers is taking its "You're Not You When You're Hungry" message to social videos aimed at Hispanic millennials. The new content from Being Latino features social influencers Jay Mendoza, Jesus Garcia, and Krystaalized. It's the first time Mars has worked with Being Latino. Media agencies Mediacom and Starcom helped pull the project together.

Two Spanish-language "symptoms," Dramático and Rebelde, are also among the 25 new "hunger symptoms" bars from Snickers this year. Other new phrases for the special packaging, which debuted in 2015, include Space Cadet and Cray Cray. Four lines are returning: Confused, Cranky, Princess, and Sleepy. Hunger symptoms are set to pop up on original, Almond, Peanut Butter Squared, and Crisper varieties this year.

Number you need to know

20% of consumers using Walgreens' app are 55 years or older. Who says apps are just for the young' uns? (It might help to be a drugstore app.) 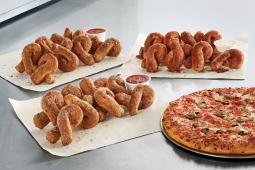 Domino's now has Bread Twists in Parmesan, Garlic, and Cinnamon flavors. For those times when you're craving pizza dough and sauce in a different format, apparently. The company called them " the perfect complement to any pizza."