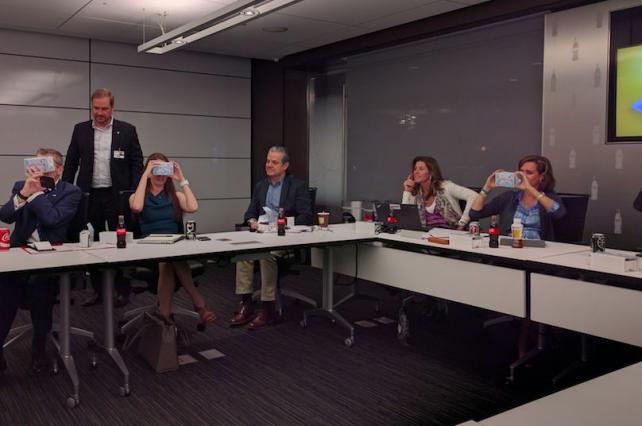 The Association of National Advertisers convenes this week at a time of domination by Google and Facebook in digital media. The two own a combined 72% share of the digital and mobile media revenue outside China, by the estimate of Pivotal Research, which far outweighs the power of any other tandem ever in a traditional medium, even during the early days of broadcast TV.

And they are gaining even more sway, thanks to a legion of employee teams dedicated to most of the largest U.S. and global advertisers, sometimes embedded with marketing departments and always closely aligned. These teams are operating on a scale no other media players have yet achieved.

More than half of the top 50 global advertisers now work with groups of staff from these giant digital players. And the giants are looking to expand. They're helping marketers learn intricacies of the constant changes in Google and Facebook platforms, get advance looks at new technology, test what works and doesn't for brands, and even develop ads. Some people in the industry liken these teams to sales reps at other media companies, account planners and other client handlers at media and creative agencies, or even category-management teams that big suppliers assign to major retailers. But they're not quite any of the above, or maybe a combination of all those things, giving them a role unlike anything the marketing world has seen before.

The Facebook and Google teams don't generate billable hours, though the staffing and scope are negotiated and baked into global agreements between the tech giants and marketers. Nor are they commissioned sales reps, though they arguably take "solution selling" to new heights, helping marketers analyze the sales impact of ads on their platforms or develop videos that will work best for their formats.

'Part of one team'
"We all consider ourselves part of one team," said Gail Horwood, VP-worldwide digital strategy for Johnson & Johnson, which has been working with a Google group for around two years and with a Facebook team since signing a global strategic deal in March. "There aren't defined lines. We're part of a project team, and it gets together wherever or however. Sometimes that's in a Google office or Facebook office or virtually via [Google] Hangouts."

Originally, J&J had some Google employees permanently stationed at its offices, but ultimately determined it was better for them to be based at Google offices to stay on top of technology changes.

The Google and Facebook teams also work with J&J's agencies on projects, and that's one sign Ms. Horwood sees that they're not trying to take work from agencies, either on the creative or media sides. J&J's agencies "are the experts at the communications process," she said, adding that the digital behemoths "are not set up to do that work at scale. It's about collaborating and teaching all of us to fish together, and then going off and fishing."

However, Google and Facebook are working alongside at least one player working to help marketers get more creative hands on deck more cost effectively. Tongal, the creative and production crowdsourcing agency with a distributed workforce of more than 100,000, became a Facebook Preferred Marketing Partner late last year, and also works closely with Google's YouTube and client teams, meeting regularly with a growing number of big marketers, according to Tongal executives.

Facebook and Google are adamant that their teams, including their in-house creative groups numbering in the hundreds, are too small to take on creative agency duties for big global marketers. And the client teams are part of groups designed to work with agencies too.

Consider that Omnicom's new "agency of the future" for McDonald's will have team members from Facebook and Google, the Marketing Store and The New York Times' T Brand Studio. Those companies were part of the pitch process for the client "and as part of that they agreed to embed in the agency with us," said DDB North America CEO Wendy Clark. They're not officially employee agencies, but rather partners with McDonald's.

Will Platt-Higgins, VP-global account partnerships for Facebook, said its global and regional account teams are formed either directly with marketer executives or through their agencies, and aim at developing "learning agendas, creative best practices, measurement analyses" and more.

Part of the work is what media agencies traditionally have done: Google and Facebook experts help with segmentation or insights around using their channels. But on the creative side, the idea is more about showing what's possible within a platform, such as how to make a video that will perform well in the Facebook news feed in 15 seconds or less with no sound, or how and whether J&J brands should work with new technologies or formats.

"As new opportunities become available, they're close enough to our business objectives that they can understand 'Should we be leveraging Canvas?'" Ms. Horwood said. "'Should be we leveraging 360 video? Should we be working with Oculus?'"

But it's more structured than just chasing the latest shiny objects to emerge from Silicon Valley, she said. "We're really focused on 'How does that intersect with our business objectives and are we delivering the best results for the market?'"

One big difference with sales reps
Big marketers have seldom clamored for more media sales reps stalking their halls. But they're eagerly adding Facebook and Google account people. Ms. Horwood and the two media players declined to get into details, but confirmed that the team staffing is part of global deals, with the Facebook version having been signed in February and the first Google deal having come years earlier.

Kirk Perry, an ex-Procter & Gamble president who since 2013 has been Google's president-global client and agency solutions, said he often hears marketers say they want more Google people on their accounts.­­­­­­

"The beauty of the strategic deals is that we can transcend" the usual sales relationship, Ms. Horwood said. "It puts the selling part to the side, because that's all done at the head of the deal. We can just focus on doing great work together." Some of what's developed with, say, Facebook, may not only live on Facebook or Instagram, or even digital media broadly. "I foresee an opportunity in the near future where things we develop for Facebook move to television," she said.

The key reason why marketers need Google client teams is simply "the speed of change in this industry, which is like nothing I've ever seen," Mr. Perry said. "Part of it is just making people feel comfortable enough with what's out there and help them focus on what's really big and meaningful to know."

Having tried both embedding team members with clients and stationing them in Silicon Valley, Google finds the ideal model now is having them housed separately in the headquarters cities of marketers.

Laurent Faracci, senior VP-global marketing and digital excellence at RB (Reckitt Benckiser), points to early access his company got for use of Facebook's Audience Insights last year, prior to the broader opening of the platform to agencies and marketers, to target and develop advertising for its Amopé foot-care brand as an example of the advantages working with the Facebook team. He likens RB's relationship with Facebook to joint business planning that RB does with Walmart or other big retailers.

Client teams had begun under Margo Georgiadis, now president-Americas at Google and previously a sales executive. "She realized bigger regional clients require more focus and dedication just because they're more complex," Mr. Perry said, adding that he took what Ms. Georgiadis started and looked to apply it globally. "I was working from what I had experienced at P&G with our customer teams, where you have a dedicated Walmart team or Target team or Carrefour team," he said. "The objective is to partner with the retailer to grow the business jointly."

Why? Because they can
Perhaps the best explanation for why Google and Facebook are building client account teams is the simplest: Because they can. "If you took a CMO 10 years ago, it would have been impossible for me to have in-depth relationships with NBC, ABC, CBS, ITV, country by country," said Unilever Chief Marketing and Communications Officer Keith Weed. "But technology loves scale. It doesn't see country boundaries. Against that, having these big relationships with these big players has proved very positive for us."

It probably would help big TV networks or other traditional media players to adopt more of a client-team approach akin to Facebook and Google, as P&G Global Brand Officer Marc Pritchard sees it.

Steve Burke, CEO of NBC Universal, was part of P&G's latest Signal digital conference in July, and part of that invitation was about helping marketers understand their increasingly complex offerings in digital and over-the-top streaming services, Mr. Pritchard said.

"They've been a big long-standing partner," Mr. Pritchard said of NBC Universal, "so we want to make sure we're thinking the same joint-value-creation way with them as we are with our other partners."

While traditional players may not have the client teams the big digital platforms have now, Mr. Pritchard believes that more of them also will look at building similar teams dedicated to the P&G business.

Eyes wide open
Collaboration and partnership talk aside, marketers are trying to keep their eyes open about Google and Facebook. P&G and Unilever, for example, weren't blindsided by the recent revelation that Facebook overstated average video view times in its official calculations, because they were already using third-party services such as Moat to track viewership metrics there, at Google and elsewhere. Mr. Weed said Unilever has applied its tougher-than-industry standards for video viewership to Facebook despite differences in its video serving from other digital platforms.

And, echoing words of Mr. Pritchard, he said Unilever wants to be closely involved at the outset with any promising new digital player, singling out Snapchat and Pinterest, "to make sure we can be that little bit further ahead as the platforms develop."