The nation's two largest candy companies are taking a detour into the snack-bar aisle with aggressive new product launches aimed at boosting their health image.

Mars Chocolate North America is taking its Goodnessknows snack-bar line national after years of testing it in a handful of markets. Hershey Co., meanwhile, has begun selling a snack bar under its premium Brookside brand. The new products from the two fierce candy competitors combine fruit, nuts and chocolate into a bar form and appear squarely aimed at successful bar start-up brand Kind.

Mars and Hershey touted their new bars at this week's Sweets and Snacks Expo in Chicago, an annual trade show that this year drew some 16,000 people, including candy wholesalers and brokers looking for the next big thing in candy and snacks.

One of the fastest growing brands is Kind, which has grown its share from 2.8% in 2013 to 4.9% last year, according to Euromonitor. The brand's surge is yet another sign of how small companies -- not big ones -- are setting the tone across the food industry. Indeed, the Hershey and Mars snack bars appear to more closely resemble Kind bars than older competitors such as General Mills' Nature Valley brand, which created the granola-bar category in 1975.

Mars will begin mass distribution of its Goodnessknows brand in August backed by a new campaign by BBDO that will include TV and digital ads. Mars Chocolate North America declined to reveal the media budget, but Marketing-VP Berta De Pablos-Barbier said spending would resemble other major product launches. "It's a big deal for us," she said.

The tagline, "Try a Little Goodness," alludes to the health credentials of the bars, which Mars says are made without artificial colors, flavors or sweeteners and contain 150 calories each.

Like Kind bars, the Goodnessknows bars includes whole pieces of fruit and nuts that are clearly visible. Flavors include cranberry almond, apple almond and peanut and peach and cherry -- all layered on a base of dark chocolate. Unlike Kind, the bars are broken into four separate squares that Ms. De Pablos-Barbier said "allows you to control your portion." Packaging touts the inclusion of "cocoa flavanols" that "help support the healthy circulation of nutrients and oxygen."

The bars are not sold in see-through packaging, which is a key feature for Kind bars. Ms. Berta De Pablos-Barbier said transparent packaging risks exposing the bars to light that could oxidize the bars and change their taste.

Lisa Mann, exec VP-marketing for Kind, responded in a statement that Kind "pioneered transparent packing within the snack bar category more than 10 years ago" because it wanted ingredients "to be the hero of our snacks." She added that "we invested in the development of wrappers early on that allowed us to maintain the textures and tastes people have come to expect -- and love -- from us, and still use that packaging today." 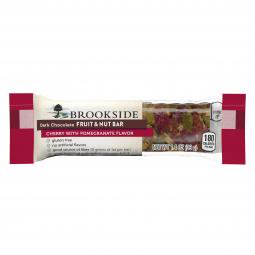 Hershey's Brookside bars -- which are just beginning to hit shelves -- also use a transparent wrapper for a portion of the package. The bars are expected to be supported with a digital ad campaign, according to a spokesman. Like the Goodnessknows brand, Brookside packaging touts a litany of health claims, including being made from real fruit and containing no artificial flavors, while providing a "good source of antioxidant vitamins A,C, E."

The bar launches come as food brands continue to face pressure from consumer groups and activists pushing for simpler ingredients and more transparency.

Mars recently voiced support for a Food and Drug Administration proposal that would mandate the inclusion of "added sugars" on the nutrition facts panel on packaging. At present, foods must only list total sugar, which could include sugar that is added as well as naturally occurring sugar.

Mars is also supporting a recommendation by the World Health Organization and U.S. Dietary Guidelines Advisory Committee that people limit their intake their intake of sugars to no more than 10% of total daily calorie intake. With the average adult consuming about 2,000 calories a day, the limit translates to about 50 grams of sugar a day, according to Carolyn O'Neil, a registered dietitian. (For context, a can of Coke contains 39 grams of sugar.)

"Supporting global public health efforts to limit society's consumption of added sugars and labeling our products transparently are steps in the right direction for us and will benefit everyone who enjoys Mars products," Mars said in a recent statement.

The company's position on the added sugars labeling puts it at odds with some other big companies. A majority of the members of the Grocery Manufacturers Association -- which represents big food and beverage companies -- "feel a mandatory declaration of 'added sugars' will not assist consumers in maintaining healthful dietary practices and may, in fact, lead to unintended consequences including consumer confusion," according to recent GMA comments submitted to the FDA.

Kind recently ran into some trouble with the FDA, which warned the company that its use of the word "healthy" to describe four of its bars did not meet regulatory standards, including exceeding allowable amounts of saturated fat. A Kind spokesman responded that "nuts, key ingredients in many of our snacks and one of the things that make fans love our bars, contain nutritious fats that exceed the amount allowed under the FDA's standard. There is an overwhelming body of scientific evidence supporting that nuts are wholesome and nutritious."

A Hershey spokesman said the company believes that "what's most important for consumers is understanding total sugar and total calories." But he added that if the government decides that listing added sugar is beneficial then "we'll support that."