McDonald's top executive Don Thompson is out at McDonald's.

The move comes as McDonald's makes sweeping changes to turn around its ailing business.

Mr. Thompson's departure follows a round of layoffs earlier this month at the company's headquarters that resulted in the loss of 63 jobs, part of an effort to cut costs by $100 million. Some executives familiar with the matter said that the chain has been conducting layoffs in departments including marketing, but the company did not respond to a request for comment.

"Steve is a strong and experienced executive who successfully led our U.K. and European business units and the board is confident that he can effectively lead the company to improved financial and operational performance," said Andrew McKenna, McDonald's non-executive chairman. 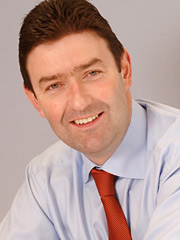 Just last week Mr. Thompson during the company's earnings call said that 2015 would be a year of "regaining momentum." For 2014, global same-store sales decreased 1.0% and in the fourth quarter and U.S. same-store sales fell 1.7%. McDonald's hasn't had a positive sales quarter in the U.S. since third quarter 2013, when it posted a 0.7% bump

The move comes as McDonald's is in the midst of a marketing refresh in the U.S. that includes a spot in Sunday's Super Bowl.

Mr. Easterbrook is currently senior exec VP-chief brand officer. In that role, he has been leading McDonald's efforts to elevate its marketing, advance menu innovation, and create an infrastructure for its digital initiatives, according to a statement.

Mr. Easterbrook was actually returning to that role. He rejoined McDonald's in April 2013 after stints as CEO at Japanese noodle restaurant chain Wagamama and as CEO of U.K. chain Pizza Express. When he left McDonald's in September 2011, he was president of McDonald's Europe, a post he was elevated to after only three months as global chief brand officer.

Mr. Thompson said in a statement: "It's tough to say goodbye to the McFamily, but there is a time and season for everything. I am truly confident as I pass the reins over to Steve, that he will continue to move our business and brand forward."