McDonald's Cooking Up Some Changes as U.S. Growth Slows 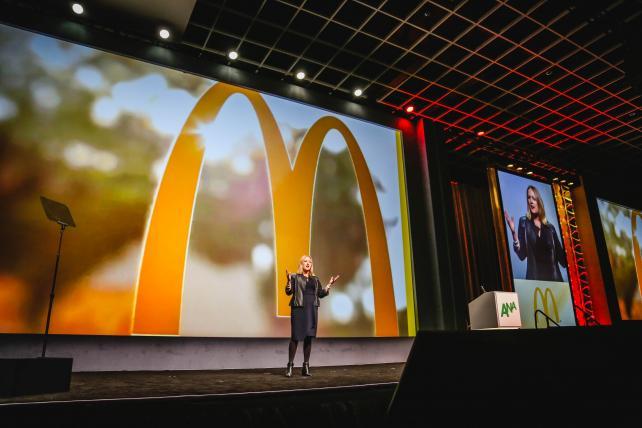 McDonald's is still growing, though its U.S. performance is not as robust as it was when All Day Breakfast was a new concept.

Global third-quarter sales at longstanding locations, or same-store sales, rose 3.5%, with increases across all of the company's four divisions, McDonald's said Friday. The U.S. posted the smallest percentage gain.

The overall results pleased investors, who sent shares of McDonald's up more than 3% in premarket trading.

The Golden Arches is continuing to revamp its U.S. strategy a year after recovering from a prolonged sales slump. Starting in January a so-called "agency of the future" at Omnicom will handle the chain's U.S. business, which is currently split between Omnicom's DDB and Publicis' Leo Burnett.

While McDonald's and Omnicom have not shared too many details on how the new partnership will be run, changes are starting to take hold. Deborah Wahl, chief marketing officer, McDonald's USA, said this week that her team is changing the way it writes briefs to make them more adaptable in today's environment.

"You have to be ready to go if something happens competitively or there's a cultural moment, you have to be ready to unleash and put messaging out there that's relevant," Ms. Wahl said Thursday after addressing the crowd at the ANA Masters of Marketing conference. "The big thing today is to be more flexible in the approach."

And when the new Omnicom agency dedicated to McDonald's USA officially begins on Jan. 1, McDonald's USA will have a new leader as well. As McDonald's announced in late August, Mike Andres plans to retire from the role of president of McDonald's U.S. business at the end of 2016. He will be succeeded on Jan. 1 by Chris Kempczinski, who joined McDonald's in October 2015 as exec VP-strategy, business development and innovation.

One thing that is not changing early next year is McDonald's approach to the Super Bowl. Once again McDonald's, an official NFL sponsor, will not be running a TV commercial during the big game, Ms. Wahl told Ad Age.

McDonald's ran a major campaign related to the Super Bowl in 2015, but opted for ticket giveaways and other promotions this year instead of running a pricey TV spot during this year's Super Bowl 50.

"Super Bowl is fantastic, it's interesting," Ms. Wahl said. "But it's almost so much attention on one time and one thing. I think it can be very effective, but I'm also looking at a longer-term viewpoint."

The growth topped analysts' expectations of a 1.2% increase, according to Consensus Metrix. But the pace of growth has continued to decline. When All Day Breakfast began in the fourth quarter of 2015, McDonald's U.S. same-store sales soared 5.7%. So far this year, McDonald's U.S. same-store sales have increased 5.4% in the first quarter, 1.8% in the second quarter, and just 1.3% in the third quarter.

Along with All Day Breakfast, which McDonald's is now expanding, bright spots last quarter were the McPick 2 value play and the updated Chicken McNuggets with no artificial preservatives.

The McNuggets are one way McDonald's is trying to appeal to diners who want to feel better about the food they eat and serve to their families. The company has been using the tagline "The Simpler. The Better." to promote such changes.

"I think people responded really well to that," Ms. Wahl said Thursday of the Chicken McNuggets change. "We've seen positive sentiment go up on that."

McDonald's is also trying to connect more personally with its millions of customers. Along with "mass personalization" through owned media such as its mobile app, McDonald's has begun making the digital menu boards in its restaurants more adaptable. For example, items can be highlighted based on the weather or local activities, Ms. Wahl said.