McDonald's has been overhauling the look of its restaurants, bringing in sleeker seating, tables and lighting, as well as its packaging. Now, its U.S. website has gotten its first major redesign since 2009.

The moves come as CEO Steve Easterbrook continues to push McDonald's to become "a modern, progressive burger company" under a turnaround plan announced in May 2015.

Updates to the site include location-based menus, easier navigation for both mobile and desktop users and a fresher look that corresponds with design cues the brand has been using in its advertising. 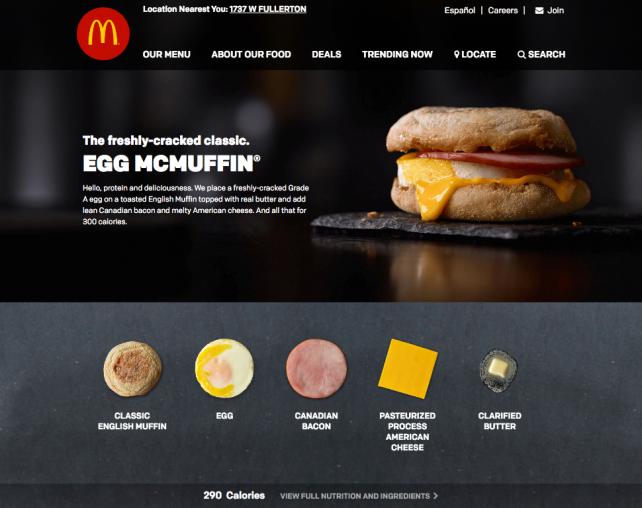 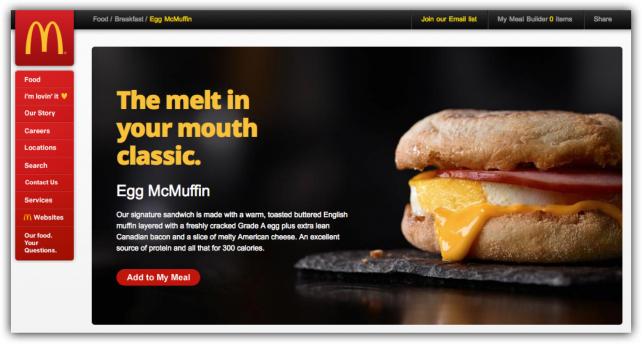 Details such as product descriptions are similar to before but have had some tweaks, such as the updated page about the Egg McMuffin (top) compared to the prior version (bottom).

The updates come as McDonald's data shows more than 70% of visits to the site come from mobile devices, largely phones as well as tablets. In all, McDonald's said more than 70 million people visit the site each year.

"This site was created out of what customers have been telling us they want to hear more about from the brand," Ms. Masullo said. Therefore, it focuses on areas such as value, menu, nutrition and location-based details.

McDonald's already had some information about where its food comes from, but is now emphasizing areas such as supplier stories and what it calls its "food philosophy" to appeal to diners craving more information about what they eat. Nutritional information - calories, fat, protein, carbs and sodium - is also easier to read, with links to a nutrition calculator offered from various parts of the site.

Menu details now change depending on where a user is logging in. For example, a visitor logging in from New England or the Albany, N.Y. area would currently see the Lobster Roll sandwich on the menu, while someone in other markets would not see that summertime option.

While much of the content on the site was already available, it is easier to find and has a cleaner, more modern look. The site includes new video elements such as shots of its French fries and Chicken McNuggets that play at the top of certain menu pages.

The updates come after the national launch of the McDonald's app last year. The app has now been downloaded more than 12 million times, Ms. Masullo said. While the app is not part of the design update, the app and its deals are highlighted on the site more prominently than before. Social content is also being more incorporated into the site.