The Golden Arches outlines diversity guidelines but doesn’t have quantifiable targets to announce just yet
READ THIS NEXT
Peloton switches up its marketing structure, names two new heads 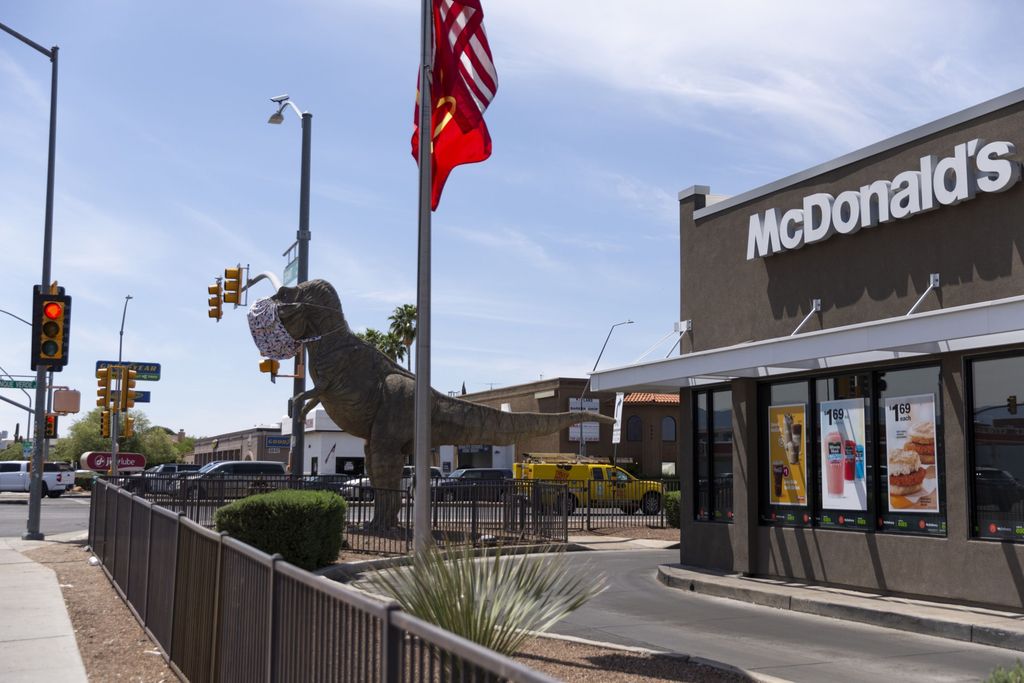 A dinosaur statue is adorned with a face mask outside a McDonalds restaurant.

McDonald’s is setting diversity and inclusion goals, and forming a pact with the Mayo Clinic related to its COVID-19 safety and sanitization efforts, as the chain tries to stand out as a leader within the racial justice movement and a standard bearer during the global coronavirus pandemic.

The plans were shared in a nearly one-hour video distributed by McDonald’s this week to employees, franchisees and suppliers. McDonald’s outlined measures that it plans to take including efforts to recruit diverse franchisees, as well as auditing its advertising to check that it reflects “the needs of customers.” The world’s largest restaurant company did not lay out specific targets for hiring or other actions, but said it would provide updates in the future.

McDonald’s CEO Chris Kempczinski and others were set to discuss the chain’s values and strategy in April at its biannual worldwide convention, which was called off due to the coronavirus pandemic. Instead, he and others tried to replicate some aspects of the event as a bit of a virtual worldwide gathering by distributing a pre-recorded video that addressed the matters that have become more prevalent since that time.

McDonald’s has started to become more outspoken about racial justice, yet there have been people who allege racial discrimination within the organization. And during the pandemic, some staffers at certain McDonald’s restaurants said its safety measures weren’t strong enough.

Kempczinski speaks in the video’s introduction of the losses felt by people due to COVID-19, then addresses racism, saying “we’ve also seen too many other members of our family live with a different kind of pain.” While not naming the Black Lives Matter movement in the video, McDonald’s has voiced its support previously in social media posts.

“While this is a moment of anger and sorrow, it must also be a moment of determination, that we will do our part to fight systemic racism and to fight discrimination in all forms,” Kempczinski said in the video.

Later on, Heidi Capozzi, who joined McDonald’s in April as executive VP and global chief people officer, discussed efforts around diversity, equity and inclusion. They include representing the diverse communities in which McDonald’s operates, accelerating cultures of inclusion and belonging, dismantling barriers to economic opportunity, and tracking its progress annually.

McDonald’s will focus on reducing hiring bias, reduce barriers to diverse suppliers who want to enter the McDonald’s system, and increase its spending in that space, Capozzi said. She also mentioned plans to audit the “advertising and restaurant experiences to ensure that they reflect the needs and demographics of our customers.” McDonald’s plans to push the companies it does business with to commit to their own diversity, equity and inclusion.

Sanitation efforts were outlined in the video by people including franchisee Ad Dekker, who showed off a McDonald’s location in the Netherlands. The setup includes stickers on the ground that look like a sesame seed bun, which show customers where to stand when waiting in line to maintain social distance. While stickers resembling french fries outline the spot to stand when ordering from a kiosk (which is then sanitized after use).