Startup Will Spend $100 Million on Marketing Over Next 12 Months 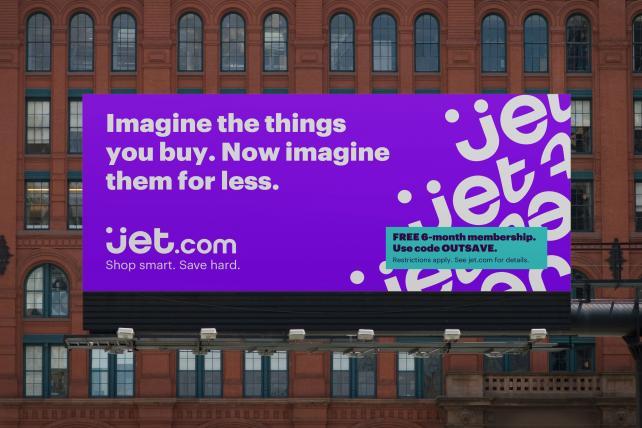 Members-only e-commerce startup Jet.com made its public debut Tuesday and kicked off a $100 million marketing blitz to introduce the retailer to the nation.

The online marketplace, started by Diapers.com founder Marc Lore, aims to offer the lowest prices by shipping and storing inventory more efficiently and passing the savings on to shoppers. Like Costco, Jet's profit will come solely from annual membership dues. The company, which has been billed as a rival to Amazon, charges $49.99 per year -- half the price of Amazon's competing $99 Prime subscription service.

In March, chief customer officer Liza Landsman, who oversees marketing, was tasked with attracting the widest possible audience to the site. To do that, the startup plans to spend $100 million on marketing over the next 12 months. The ads will tout Jet's club-price savings alongside the message that consumers don't have to sacrifice savings for quality.

"We think that our value proposition is relevant to a huge group of consumers, so we are marketing and advertising in a way to reach that broad swath," said Ms. Landsman, who joined Jet from E-Trade.

The campaign, created by RGA and Jet's in-house team, debuted with outdoor ads on billboards, double-decker buses, taxi tops, subways and phone kiosks in 10 U.S. cities including New York, San Francisco and Boston. A digital and social push will also begin running this week, followed by a direct mail campaign that will break in August. The efforts are building up to the release of Jet's first-ever TV spot in September, which Ms. Landsman says will be "mindblowing."

The out-of-home portion of the campaign will be simple and direct, while the digital and social ads will be fun, witty and tailored to how users have interacted with the site, said Ms. Landsman. The creative will also be very purple -- Jet's signature color.

The mix of media channels was designed to reach customers wherever they are -- whether it's their morning commute or online. "It's important for us to drive a combination of awareness and performance in the marketing and channels we're choosing," said Ms. Landsman. "Our consumers spend a lot of their time shopping online and they spend a lot of time living in the real world."

The company is also pushing its Jet Anywhere program, which allows members to earn "JetCash," or rewards dollars that can be put toward future purchases on the site, when they shop online through Jet's more than 700 partner retailers including Macy's, Apple, Warby Parker and Sephora.

Jet's 135-person corporate team has been working around the clock for the past three weeks in preparation for the e-tailer's debut, following a beta period that began on April 30. During the soft launch, more than 100,000 users who signed up for Jet during a referral push earlier this year were given exclusive access to the shopping site. The company used feedback from these early shoppers, called Jet Insiders, to refine the way it presents savings within the cart, groups items and gamifies the shopping experience, among other features, leading up to the public launch this summer.

"We wanted to come out of beta now to take advantage of back-to-school time," said Ms. Landsman, who added that parents began shopping for supplies while Jet was still in beta.

Jet plans to continue retooling the experience and will keep an open dialogue with consumers. As part of that effort, the company is opening a user-experience lab at its headquarters in Hoboken, N.J., where customers will be invited to visit, offer feedback and test out upcoming updates.