As the Generation's Assets Grow, Robo-Advisers Are Resonating

Tarik Ancrum, 27, began saving for retirement when he was 21 years old. He has a handful of go-to finance blogs and books, dabbles in the stock market and invests in an employer-sponsored 401(k) plan. As a personal-finance enthusiast who advises financial advisers, Mr. Ancrum may be more immersed in finance than others his age, but he's certainly not alone. He represents the growing segment of millennials who are taking charge of their money early on. "We just want to know and be in control of our own future," said Mr. Ancrum. "You're never sure what can happen." 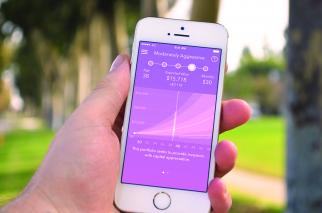 Acorns, a mobile app that is gaining ground with consumers, invests your spare change.

After coming of age in the recession, facing a tough job market and being burdened with heavy student debt, many millennials are distrustful of big banks and traditional financial advisers. They're relying instead on their own research and user-friendly robo-advisers like Betterment, Wealthfront and Acorns, which have more modest management fees and no or low minimums.

"We're a generation that's come of age in a world of algorithms, big data and automated analysis," said Nicholas Roach, 31, who uses Betterment and Scottrade and has a 401(k) plan. "It only makes sense our investments are a part of that culture, too."

More than half—55%—of millennials age 22 to 33 are saving for retirement, according to a Wells Fargo study. But they invest less than baby boomers, because they are balancing debt repayment with savings.

Millennials on the whole—typically defined as 18 to 36 years old—also have a unique outlook on financial planning, according to Sophia Bera, founder of Gen Y Planning, which caters to the cohort. Young people expect to work past the average retirement age of 66 and are not counting on the same Social Security benefits previous generations had. Some hope to leave high-pressure jobs to pursue passions later in life, or pay off student debt and scale back to less-demanding work schedules. Many want to travel the world or are approaching major life stages like buying a house or starting a family, all of which require funds to tap outside of retirement plans.

To match this thinking, Ms. Bera is changing the conversation around investing. For example, she avoids the word "retirement" when she speaks to clients and pushes "financial independence" instead. "Retirement is just for old people and financial independence is for any age," she said.

Betterment, called a robo-adviser because it uses algorithms to advise users based on when they plan to use their money and how much they want to save, offers goal-based investing that can align with millennials' milestones. There might be one fund for retirement, another for a down payment on a house and a third for a safety-net stash.

Mr. Roach, the Betterment customer, began using the service a year ago after a colleague recommended it. About one-third of Betterment users—whose average age is 36—are referral-based, said Joe Ziemer, director-communications at the company. Betterment encourages referrals by offering periods of fee-free investing for sending a friend."

Millennials, they really value the input of their inner social circle and family and friends," said Mr. Ziemer. "I will refer lots of services, but when it comes to things like money and health, I am hyper-selective. ... That's meaningful."

Acorns, a mobile app that invests spare change, is also gaining ground with young people—80% to 85% of its customers are millennials. It links to a debit or credit card, rounds each expense up to the nearest dollar and invests the change. Started by a father-son team, Acorns was created with the idea that you could "start small and grow big," said CMO Nick Roberts.

The app taps into the way millennials spend money—using debit and credit cards. Among cardholders age 18 to 29, 51% prefer to use plastic rather than cash for purchases less than $5, according to a survey by CreditCards.com, which suggests that millennials don't carry much cash on them.

Both Betterment and Acorns are easy to use and digitally based. Innovation is a draw for the generation, according to Megan Hartman, head of Red Peak Youth, a youth-centric arm of the agency Red Peak Branding. "Providing utility, especially in a traditionally confusing and stodgy industry like finance, goes a long way in terms of building credibility with millennials," she said.

Now big banks are also setting their sights on millennials, in part because they're making more money. The cohort controls nearly $2 trillion in assets, a sum expected to reach $7 trillion by 2018, according to Wealthfront. They also stand to inherit an estimated $30 trillion, according to Federated Investors. 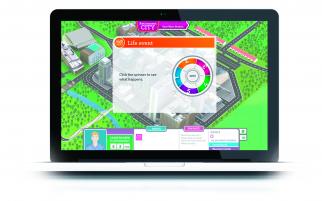 Wells Fargo is gamifying financial literacy to encourage millennials to take control of their finances.

Companies like Visa and U.S. Bank are using reverse mentorships. "Hire them and learn from them," said Oliver Jenkyn, Visa's group exec-North America, of millennials at a recent banking conference.

Capital One earlier this year acquired the budgeting app Level Money, which is popular with millennials. Wells Fargo boosted its mobile capabilities, allowing remote access to retirement plans and enrollment via text. It also has a game called "Retirement City," focused on financial literacy.