Mr. Mucus Gets a Chatbot Thanks to WebMD, Which Grows Its RB Partnership | Ad Age
Skip to main content

Mr. Mucus Gets a Chatbot Thanks to WebMD, Which Grows Its RB Partnership

Now you can talk to Mr. Mucus, in a sense, via chatbot, thanks to WebMD and the latest wrinkle in its long-running partnership with RB (Reckitt Benckiser).

The chatbot is part of a growing artificial-intelligence effort from WebMD, an outgrowth of voice programs developed last year to work with Amazon Echo and Google Home. Perhaps sadly, Mr. Mucus doesn't actually engage in the conversation. But folks looking up cold and flu symptoms on WebMD will be prompted by the chatbot to, say, ask any questions they have about the ailments, along with branded Mucinex queries about how to treat cough or congestion symptoms.

While "partnership" gets thrown around too liberally in marketing, what's been going on the past six years between WebMD and RB fits the description. The medical information site is one of RB's original media "joint business planning" partners along with the likes of Facebook, meaning its executives play an integral role in each year's communication's planning process and even retail salesforce planning for brands that also include Lysol, Delsym and Airborne supplements. 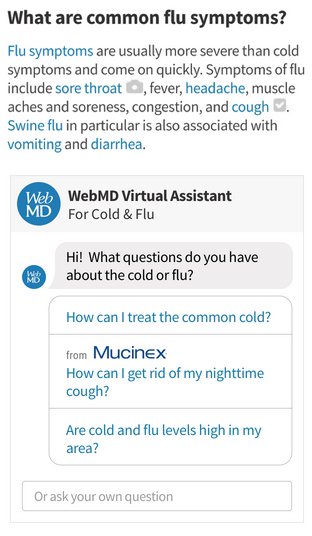 "In addition to the question the user has asked, the chatbot is also figuring out what related questions you may be interested in," says Paul Bar, WebMD group VP of consumer product marketing. "We also have created questions that are specific to the brands."

The chatbot also integrates geo-location and geo-incidence data based on queries people are making with WebMd about cold and flu symptoms, which in turn helps predict the spread of disease before the Centers for Disease Control reports about it.

"So if you're in New York City, we are able to push cold and flu alerts telling people there's cold and flu in the area," Bar says.

That incidence data will also trigger prompts to use the chatbot on WebMd, with Facebook advertising also being used to promote it.

The WebMD relationship is among factors that has helped make Mr. Mucus a star of the RB brand lineup, having gone from a startup in 2004 to becoming by 2014 the largest U.S. over-the-counter drug brand of any kind by dollar sales, according to Brian Dolan, senior brand manager of healthcare equity at RB.

Cheung has high hopes for the creative-development stage of the WebMD relationship, because the media and data collaboration has been productive up to now. Investment with WebMD has grown consistently over the years, has accounted for "double digit" sales lifts and delivered return on investment 52 percent ahead of consumer packaged goods benchmarks, based on IRI analytics.

RB has for several years been using WebMD symptom incidence data to target digital ads both on and off the site, though it has yet to extend that to the TV buy, which is "really big, broad-based plan to grow our equity and perception of superiority," Cheung says. "WebMD is tailoring to a more select group of people."