Urges Major Automakers to Move Faster on Electric Vehicles
READ THIS NEXT
4 ways to put customers at the core of the mobile experience
Elon Musk and Automotive News Publisher and Editor Jason Stein
Credit: GLENN TRIEST

In the dead of winter, Elon Musk, electric-vehicle and space-flight entrepreneur, got on a plane at 6 a.m. in Southern California and took off for frigid Detroit.

Mr. Musk, who divides his week between two companies and five young sons, may have been hesitant to make the trip. A few months earlier, Michigan had passed a law blocking his company, Tesla Motors Inc., from selling or even displaying its cars at factory-owned showrooms in the state.

And the forecast low in Detroit was 3 degrees.

Mr. Musk -- a bona fide icon in Silicon Valley but still an enigma in Detroit -- made his way to the Renaissance Center, home of General Motors, to deliver an important message to his audience about the future, if only they would listen.

"Electric cars are just fundamentally better," Mr. Musk said at the start of an hour-long talk at the Automotive News World Congress. "I think that's where the future is going to go, but it's only going to go there if the big car companies make risky decisions to do electric vehicles. I hope they do, and we're trying to be as helpful as we can be."

News outlets hang on his every word about Tesla or his spacecraft company, SpaceX, which holds a contract from NASA to launch cargo into orbit. He is widely credited with inspiring Robert Downey Jr.'s portrayal of entrepreneur Tony Stark in the "Iron Man" films. Even the smallest revelation about Mr. Musk's personal life -- he recently told users of the website Reddit that he sees showering as his most valuable daily habit -- spreads across the Internet like wildfire.

GM CEO Mary Barra said last week that she can often remain anonymous when shopping for groceries. That is rarely true for Mr. Musk. Wherever he goes, people ask to take photos with him.

"If I go try to hang someplace with my friends, people will come up to me quite a lot," said the soft-spoken South African native, before adding: "They're almost always really nice and everything."

And yet, for all his fame and fortune, Mr. Musk desperately needs Detroit's help.

He has bet everything on his vision of electric cars. During the discussion, Mr. Musk described how Tesla sank him into the depths of despair and near bankruptcy, only to stage a comeback. A few years later, Mr. Musk has enough confidence to predict that Tesla's electric car deliveries could increase a hundredfold between now and 2025.

Even after doing that, Tesla would be dwarfed by GM, Toyota or Volkswagen. There are 100 million cars and trucks sold worldwide every year. In 2014, Tesla delivered about one-thirtieth of one percent of them.

That is fine by Mr. Musk. He is not driven by profit or market share. He is not inspired by wealth or racing trophies. Simply put, he wants to end the era of the internal combustion engine that began in Detroit a century ago.

"Most of the good that Tesla will accomplish is by cutting a path through the jungle to show what can be done with electric cars," Mr. Musk said. "The significance we will have is the degree to which we do force other companies to accelerate their plans."

'Terrible things'
Mr. Musk knows it's not an easy time to see that path. Oil prices have plunged to a 10-year low, halving the price of gasoline for Americans. The drilling technique called hydraulic fracturing, used from Pennsylvania to Texas to North Dakota, has vastly expanded the accessible supply of oil and gas under Earth's surface. By how much is not known.

In such a market, Mr. Musk said, car companies cannot count on the price of fossil fuels to serve as a "forcing function" that drives customers to buy electric cars.

Detroit's titans know this well. Next to speak after Mr. Musk was Sergio Marchionne, CEO of Fiat Chrysler Automobiles, who has openly discouraged people from buying the all-electric Fiat 500e because it's a money loser for his company.

Mr. Musk gave some credit to Nissan, the maker of the all-electric Leaf. He offered mild praise for GM, which treated the Detroit auto show as a coming-out party for the second-generation Chevrolet Volt plug-in hybrid and a concept car dubbed the Chevrolet Bolt that would offer 200 miles on a charge.

"Even if I don't know what I don't know, which is the oil price, there is one trend which is unmistakable," Nissan CEO Carlos Ghosn said at the Detroit auto show last week. "It is emissions regulations are going to become tougher. Global warming is becoming more and more of a threat.

"I think zero-emissions technology, particularly electric cars, is here to stay and here to grow," he added.

In Mr. Musk's eyes, cars such as the Leaf and Bolt do not represent competition. They represent progress.

But if automakers do not move more quickly, Mr. Musk suggested, they will pay the price later, along with the rest of humanity, as carbon emissions from the tailpipes of gasoline cars change Earth's climate and ravage the planet.

He used the analogy of a city that lets its citizens dump their garbage into the street. Eventually, he said, "terrible things" happen.

Electric architect
This was the very idea that led Mr. Musk to invest in Tesla in 2004. 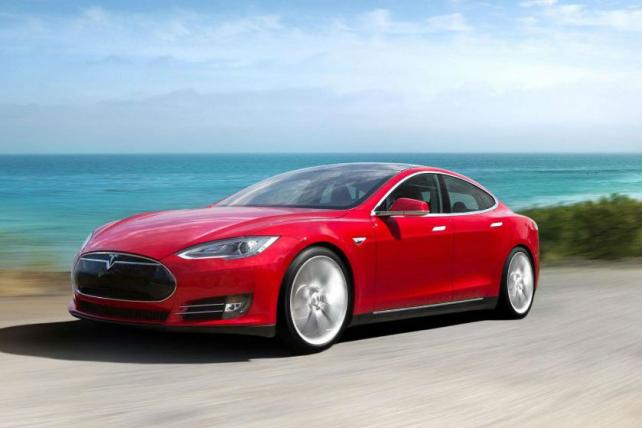 Mr. Musk had made a fortune from the online payment company PayPal. He wanted to help stop human-made climate change. And to him, electric cars -- and most assuredly not hydrogen fuel cells, which he describes as "extremely silly" -- seemed the only remedy. Yet it was a remedy that Detroit didn't seem willing to consider.

"People thought electric cars were like a golf cart: they were slow, didn't maneuver well, had low range, were ugly, didn't have much functionality," Mr. Musk said. "That's the picture that people had in their minds. We had to show people that electric cars could be fast, sexy, handle well, long range and be a great car."

To achieve this, Mr. Musk has exerted an unusual level of control over Tesla's products.

His other title at Tesla is "chief product architect," and many aspects of the Model S sedan, like the optional third row of rear-facing seats, reflect the needs of Mr. Musk and his five sons. When the car was designed, Musk removed the rear reading lights, thinking people would be reading on a backlit device such as a tablet or a Kindle.

During a nighttime drive, one of Mr. Musk's sons wanted to read a conventional book in the back seat. He discovered that the reading light was missing.

"This is the stupidest car in the world," Mr. Musk recalled his son declaring.

Mr. Musk had Tesla's engineers put the lights back in.

This level of involvement has won over acolytes such as Phil Martens, president of aluminum supplier Novelis, who said he intends to buy a Tesla as his next car.

"This guy to me is singlehandedly the most impressive business executive I've seen in my lifetime," Mr. Martens said in an interview. "His ability to take a concept and bring it into reality is unbelievable."

On the brink
Mr. Musk may seem unflappable now. When he invested in Tesla, though, he gave the company roughly a 10% chance of success. His heart would sink a few years later when Charlie Munger, the legendary vice chairman of Warren Buffett's investment firm, told Mr. Musk he was doubtful about Tesla's prospects.

He was willing to sacrifice everything: his fortune, his company, his sanity.

"No one would take us seriously," Mr. Musk said of Tesla's early days. "They said: 'He's just an eccentric rich guy who's going to lose all his money.'" After all, he was not only pitching a startup but an EV startup, at a time when sales of the Hummer were soaring.

To skeptics, Mr. Musk said, it seemed like "stupidity squared."

When the economy collapsed in 2008, Tesla nearly did the same. Mr. Musk said he had never believed he was susceptible to a nervous breakdown, but in Tesla's darkest hour, a few days before Christmas in 2008, it felt imminent.

Mr. Musk scrounged $20 million from investors and put the last $20 million in his bank account into Tesla. He borrowed money to pay his rent. The cash infusion tided the company over until early 2009, when Mercedes-Benz parent Daimler AG bought a stake in the company and put it on stronger footing.

Now, he is returning the favor to the auto industry.

Last year, Tesla opened up its book of patents, free of charge. Automakers do not even need to ask for permission; they can take what they need.

Tesla also has opened up access to its proprietary fast-charging stations, called "superchargers." Mr. Musk said Tesla has had discussions with other automakers, offering to let customers use the charging network so long as the automakers pay their share.

Money is no object
Even as Mr. Musk talked on stage on Tuesday, Jan. 13, Tesla's stock price fell 7% in after-hours trading. Analysts chalked it up to a brief comment about limp sales in China.

It happens all the time. Mr. Musk finds it endlessly frustrating.

He said he caters Tesla's strategy to long-term investors. He cares roughly as much about the short-term investors who speculate on Tesla's stock as they care about his company -- that is to say, "not at all."

Tesla is an odd duck in the auto industry for its lack of focus on profits. Musk said he expects to turn a profit around 2020, which would be 17 years after Tesla's founding.

He said the company would be profitable already were it not investing so heavily in new products and factories for rapid growth. Mr. Musk has set a goal of delivering 500,000 vehicles in 2020, up from an estimated 33,000 units in 2014. Last week, he said Tesla should be able to deliver a few million vehicles by 2025.

Cranking up volume is critical, Mr. Musk said, not only for meeting pent-up demand, but also for making a dent against his biggest competitor: the gasoline-powered car.

In a note to investors, analysts from Barclays Capital Inc. said the company would have "a tough time" getting to a few million cars by 2025. They projected that Tesla will deliver 426,000 vehicles in 2020, shy of Mr. Musk's goal.

"Despite all that Tesla has accomplished thus far," the note read, "it still faces a very aggressive ramp schedule."

But for Mr. Musk, who bet everything on a 10% chance, who was willing to spend his last cent on a dream of electric cars, this is no obstacle.