Automaker Signs Marketing Pact Covering 100 Colleges and Universities
READ THIS NEXT
Chipotle cosmetics are back, and Elmo cleans up for SC Johnson: Trending 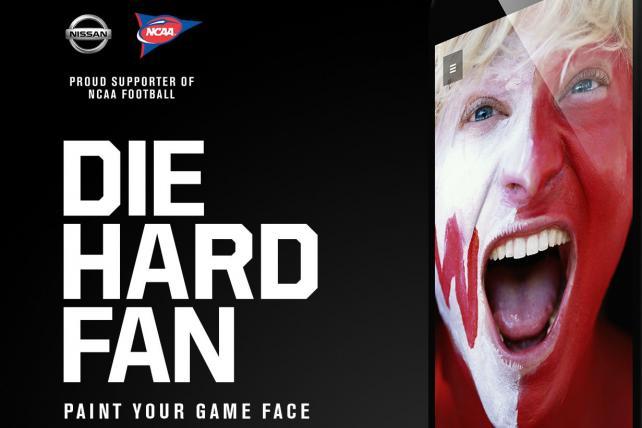 The four-year-deal includes permanent Nissan signage in hundreds of stadiums and arenas and gives the company the rights to use school logos in TV ads. All told, the pact will cover 22 men's and women's sports at the schools, allowing the automaker to reach 22 million alumni and 188 million fans nationwide, according to estimates provided by Nissan.

Nissan did not disclose financial terms. But Jeremy Tucker, VP-marketing communications and media for Nissan North America, called it "massive and complex."

"We saw this as a white space," he said in an interview. "There is no one activating it in automotive at this scale nationally 11 months out of the year, always on."

The pact was negotiated with media rights holders for the schools, including IMG College, Learfield Sports, Fox Collegiate Sports Properties, JMI Sports and Sun Devil Athletics. The deal is not exclusive, meaning universities might still have partnerships with other automakers. "There can be others, but not at this scale," Mr. Tucker said.

Nissan, he said, created a custom marketing playbook for each school. So for instance, regional and local TV ads for Nissan and its dealers will be tagged with logos and slogans for the local university -- such as a "Hook 'em Horns" message in Nissan ads in Texas. Plans also include print, radio and social media ads as well as in on-campus publications.

There will be plenty of on-the-ground marketing, too. This weekend, for instance, Nissan is setting up face-painting booths at several campuses at which the deal begins immediately, including Ohio State and the University of Southern California.

All 100 schools will be active in 2016. The pact includes a sponsorship of the University of Texas vs. University of Oklahoma football game, known as the Red River Showdown. Other schools included are UCLA, Duke, Notre Dame, University of Michigan and plenty of other big-time programs.

To hype its new association, Nissan is launching a "Diehard Fan" app that allows fans to virtually paint their faces in their favorite team colors. Fans can choose from designs representing nearly all 100 collegiate teams in the new deal. The app allows fans to put virtual face paint over an existing picture or portrait. The designs were created by hand-painting them on human models and then digitally remastering them for the app. The agency behind the app is Critical Mass.

The effort is part of Nissan's "go big" marketing strategy that has included plenty of sports marketing. Nissan returned to Super Bowl advertising last season for the first time since 1997. It has not yet disclosed this season's plans.

In June, the automaker secured naming rights for the NFL stadium where the Tennessee Titans play. Nissan is also a corporate sponsor for the College Football Playoff, which began last season. And this fall the marketer kicked off the fifth year of its "Heisman House" campaign, which stars 15 Heisman Trophy winners in a series of TV ads. Nissan's lead creative agency is TBWA, Los Angeles.

Total measured media spending on the Nissan brand jumped 9% last year to $702.8 million, according to the Ad Age Datacenter and Kantar Media. Nissan ranked 10th last year in total sponsorship spending among among automakers, spending an estimated $20 million-to-$25 million, according to sponsorship consultancy IEG. Of the top 11 spending auto marketers, Nissan was one of five whose spending accelerated from 2013, IEG said.. General Motors was No. 1, spending $190 million-to-$195 million.