The Olay musical comes to Broadway, but if you miss it there's always the Febreze album | Ad Age
Skip to main content
Sign In Register

The Olay musical comes to Broadway, but if you miss it there's always the Febreze album

Procter & Gamble finds sometimes it's better to 'Be a band, not a brand'
READ THIS NEXT
Free Budweisers for the vaccinated, and ‘Vax Tee’ from Miller Lite: Trending

Olay the musical opens on Broadway April 9. But if you can't make it, don't worry. At least you can get the Febreze album.

The Procter & Gamble Co. brands are diving deep into some strange musical adventures because music has worked surprisingly well for them lately, so they're reaching back to hit higher notes. 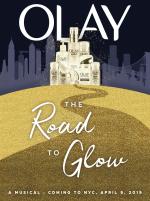 Olay's Broadway musical, "The Road to Glow," will have a one-night engagement at New World Stages on 50th St., playing off success of last August's "I Can't Wait to Wash My Face" video produced for the brand by Gary Vaynerchuk's women's lifestyle site PureWow.

That video has more than 10 million YouTube views, and the brand followed up with a holiday musical in November that has 4 million. As a result, Olay says it was planning a Broadway even before "Skittles Commercial: The Broadway Musical" had its one-night stand Feb. 3 as an alternative to a Super Bowl ad for the Mars brand.

John Grim, associate brand director on Olay, happened to see the Skittles musical because he was in town that day. "I loved it," he says.

But the inspiration really came from fans of Olay's prior YouTube show tunes, who were asking things like "Hey, can I get a full cast recording? Can you bring it to Broadway?" Grim says. "Back in October/November, we decided to give fans what they were asking for in the spring."

P&G won't be selling tickets. But fans who post videos singing along or lip syncing to one of the existing Olay tunes will be eligible to win an all-expense paid trip for two to New York to see the show. Others can enter a lottery for free tickets at TodayTix.com.

For Febreze launching was a natural outgrowth of musical ads the brand has run on streaming platforms and terrestrial radio since 2015.

The album, which will be available on for streaming on FreshnessbyFebreze.com by no later than noon on March 13 and also released on major streaming platforms, will include a new hip-hop single as its opening track titled "Nobody Do It Fresher." The others are all songs that originally ran as ads on radio or streaming services.

Febreze got into streaming and radio because it wanted to reach more younger consumers, says Guerin McClure, associate brand director for North American and global air care at P&G. That led inevitably, if unintentionally, into the music business.

"We concluded for a brand whose equity was 'breath of fresh air,' one of the freshest things we could do was not have another annoying ad in the middle of a music stream," McClure says. "We kind of jokingly called it 'Be a band, not a brand.'"

Musical ads from Grey Midwest and New York offices in conjunction with Junto Sounds has spawned more than 100,000 social-media comments, often from people embarrassed to admit they thought they were really songs and even tried to give them thumbs up.

"We get a lot of comments like, 'We think this Febreze ad is lit'," McClure says. "I just think it's fun, especially if you compare it to the contrast of being screamed at by a car dealer ad like on normal radio."

Correction: An earlier version of the story said Hannah Rose, star of the Olay videos, will appear in the Broadway show sans makeup. She will wear makeup in the show.