Amid an unstable economic climate, asset manager OppenheimerFunds is unveiling a campaign this week that encourages people to invest in global markets. The effort, called "Invest in a Beautiful World," pushes the firm's long-term investment approach -- centering on global and emerging economies -- by injecting a hopeful outlook into the financial conversation.

"In a world that is so filled with negative news and the fear tactics," said Chief Marketing Officer Marty Willis, "we felt that optimism was a really stronger way for us to differentiate ourselves in the cluttered market."

The campaign breaks Sept. 1, a launch date the firm chose not to delay due to current events. Oppenheimer is instead using the global market trends as a talking point that supports the campaign's message. To some, now is perfect time to bet on the market.

"It's really about long-term investing and finding ideas that others often overlook," said Ms. Willis. "We see possibility where others often say they're negative on it."

The company's argument for keeping your hard-earned dollars in the uncertain global market: fickle investor behavior causes markets to fluctuate. Real value comes from staying the course over long periods of time.

That's precisely how many financial advisors are trying to persuade their wary clients, and OppenheimerFunds is hoping its new brand approach will help. Its ads speak to financial advisors as well as high-net-worth investors and institutional markets, such as pension funds, which are the focus of the firm's growth strategy beyond retail.

Investors "want to be inspired. They want to be motivated," said Stephen Tisdalle, head of brand marketing at OppenheimerFunds, who heard from clients during 12 weeks of testing that they want ads that "can give some information that I can then use with my end-investor that says 'This is where I'm putting your money.'"

Agency MRM//McCann, which won the project in a competitive agency review last year, aimed to bring those investments to life in a hopeful and engaging way. One ad, for example, depicts a wall of satellite dishes in a low-income housing unit with the message: "Invest in an interconnected world." It serves as an example of OppenheimerFunds' investments in technology, specifically satellite telecommunications, which help people connect throughout the world. 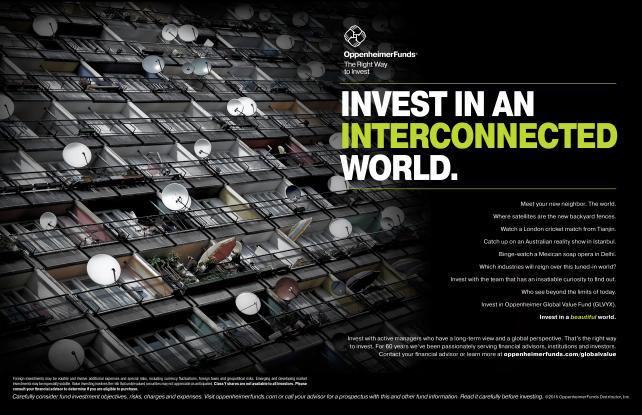 "It's easy to give a dossier of what a fund is or what to invest in," said Joyce King Thomas, chief creative officer working with MRM//McCann, "but what we've done together is try to make it always very emotional, [to] always have some soul."

The term "beautiful," which is at the core of the effort, is not something you see often in financial ads, which are typically blanketed with cityscapes and stock footage of businessmen and women shaking hands.

"It's a word that you would never associate or use as a Wall Street firm," said Mr. Tisdalle, adding that the firm initially pushed back on it.

But the tension in the copy and imagery, which highlights things that are uncharacteristically beautiful, like a maze of pipes beneath the ground that are used to transport fuel, ultimately sold OppenheimerFunds on the idea.

"All of the iconography and imagery has this embedded tension in it where it's beautiful, but it not necessarily always is beautiful," said Mr. Tisdalle. "It's about perspective… It's beautiful to a lot of people because of what value it generates for them."

The robust effort incorporates digital, print, mobile and out-of-home, as well as a revamped website that is customized for each individual type of investor. The push also features an "Emerging Voices" program that highlights local artists from emerging market countries.

It is "a reflection of the intimacy that we have with the markets that we invest in," said Mr. Tisdalle, adding that the effort also aims to give back to those markets. "It's not just an economic relationship, but it's also a deep, social connection with what's going on, because that enables you to know where to invest."

Ms. Willis declined to comment on the budget for the campaign, but said it's the first brand effort OppenheimerFunds has embarked on in more than six years.

OppenheimerFunds spent $3.1 million on U.S. measured-media in 2014, according to Kantar Media.