The new "culture of productivity" at Procter & Gamble Co. could cost marketing executives, agencies and other marketing suppliers plenty, as each has been targeted for deeper cuts, executives told analysts and investors at a meeting in Cincinnati today. 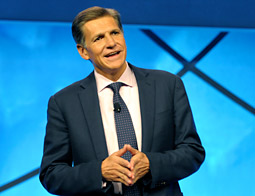 Chief Financial Officer Jon Moeller said in a press briefing after the analyst meeting that around 1,000 of the positions eliminated so far were for marketers in the company's regional market-development organizations, including North America, whose duties overlapped and have been consolidated with regional operations of global business units.

Melanie Healey, Group President-North America, said her group has eliminated around 15% of its headcount so far, well ahead of the companywide 10% reduction. Alex Keith, VP of North American laundry, another area where P&G has faced market-share losses in recent years, said her group has cut 20% of nonmanufacturing jobs, double the corporate pace, including rolling the duties of three Tide marketing directors into one job.

It's unclear how many of the additional job cuts will come from marketing ranks, but Mr. Moeller said the 2% to 4% annual reduction would be a net figure after P&G continues to hire people, particularly in developing markets.

Providing new details on how P&G plans to cut $1 billion in marketing expenses over five years, Global Brand-Building Officer Marc Pritchard said the company wants "fewer, bigger creative ideas that can travel around the world," which results in lower agency and production fees by eliminating some that "don't add value."

P&G has at times had "too many ads on air," Mr. Pritchard said, "which has diluted the core-benefit communication of the brand."

For example, Pampers in recent years has pared its global "messages" to two from eight via Publcis Groupe's Saatchi & Saatchi. A concept developed by WPP's Grey Global Group in Australia showing people blindfolded in a room of fetid trash but loving the Febreze-treated smell has aired in nine countries and three regions. Tide, likewise, has gone from three campaigns in the U.S. alone via Saatchi to one under the "My Tide" banner, Ms. Keith said.

"Our objective is to increase the number and effectiveness of our advertising impressions while growing spending at a rate of around two [percentage] points below sales growth."

While P&G plans to plow savings from productivity efforts back into marketing this year, Mr. Pritchard said the plan is still to take at least some of the marketing savings to the bottom line.

A bigger proportion of the cuts will come in the non-advertising portion of P&G's annual marketing spending, including production of promotion and in-store marketing programs, coupon distribution and eliminating things such as giveaways of stuffed animals with multiple purchases of brands like Febreze, which Mr. Pritchard said "don't build brand equity."

P&G already has cut suppliers for consumer and trade promotion programs from 20,000 to 13,000 in recent years and plans to squeeze that number further, he said.

The company also, as previously discussed, plans to keep cutting costs by shifting spending into more cost-effective digital and social media, though Mr. Pritchard gave that less focus than he has in some prior presentations.

The company, which has been under pressure from investors such as Pershing Square Holdings' Bill Ackman to cut costs and turn around market-share losses, is also looking to increase innovation and revealed some of the plans for stepped-up activity to begin early next year.

Those include the relaunch of Vidal Sassoon hair care, discontinued years ago as a mass brand in the U.S., as a salon professional brand. P&G is also restaging Olay Regenerist line and using dermatologist recommendations to position Gillette Fusion ProGlide and Mach 3 razors for the 70% of men who believe they have sensitive skin.

Some recent P&G innovations are outperforming projections. Tide Pods is on track to reach a higher-than-expected $500 million in first-year sales in part because, despite being among P&G's most premium-price detergent products, it's gotten an unexpectedly high 50% of users so far from "lower-price-tier shoppers," Ms. Keith said.

That product appeals to apartment dwellers without their own washing machines, and Ms. Keith said P&G also has focused on marketing each Pod as having the cleaning power of six cups or single-use-dose liquid packs from its value-priced rivals. "Fewer and bigger" is also the watch phrase for product rollouts, though P&G since last year has doubled the number of big-bang "discontinuous innovation" initiatives in its pipeline, aimed at creating new categories or making current products obsolete, said Jorge Mesquite, group president-new business creation and pet care.

Spokesman Paul Fox said later that doesn't necessarily mean the push into services didn't work, but said those concepts "aren't likely to create new billion-dollar businesses." The new approach, he said, is part of P&G "focusing on the core."

~ ~ ~
CORRECTION: An earlier version of the story incorrectly said non-advertising costs made up $2.1 billion of P&G's overall $11.5 billion marketing outlay.