Campaign Also Includes Partnership With Manhattan Concept Store
READ THIS NEXT
The Week Ahead: Advertising Week Europe is back and ANA hosts in-house agency event

For Pepsi, short is sweet when it comes to ads, which is why the brand is taking the unusual step of running five-second TV ads to support the cola's new emoji-designed bottles.

The brand will run more than 100 online and TV ads beginning in mid-May that are five seconds in length, a Pepsi spokeswoman confirmed. "Consumers want a shorter form of everything. This is our way of transforming media to make it more relevant to consumers," she said. The marketer is also seeking to make the ads as contextually relevant as possible. So an ad running during a baseball game will have a baseball theme, the spokeswoman said.

Here are examples of the 5-second ads.

Agencies working on the campaign include Motive and Quietman.

TV ads are typically bought in increments of 30 seconds and 60 seconds, although shorter buys are not unprecedented. In 2009, Miller High Life created a one-second Super Bowl ad. DeLeon Tequila, a joint-venture between Diageo and Sean "Diddy" Combs, last year ran a series of 15-second ads, figuring that was the amount of time that matched the attention span of the average consumer. "They're busy, focusing on multiple screens at once, and have a short attention span. You have to capture them with the first beat," Diddy said in a statement at the time.

Pepsi's 5-second play would suggest that attention spans are shrinking even further. USA Today reported that the unusually brief ads forced Turner Broadcasting to "update its system manually when it starts running bundles of Pepsi's ads next month on TNT, TBS, Adult Swim and Tru TV." But Turner was willing to work with the marketer.

"This lends itself perfectly to the consumer experience and trying to make the messaging resonate better," Donna Speciale, president of Turner ad sales, told USA Today.

Pepsi is also seeking to bring the emojis to life in a store in Manhattan. The partnership is with Story, a store in Chelsea that puts brands at the center of rotating store concepts in return for a sponsorship fee that starts at around $400,000. Pepsi's deal is part of a concept called "Have Fun" that will run from April 26 to May 22.

Pepsi first introduced emoji cans and bottles last year in Russia, Canada and Thailand. The Story partnership and five-second TV spots come as Pepsi prepares to launch the campaign in the U.S. as part of a larger global push. The global campaign involves slapping Pepsi-designed emojis on cans and bottles that the soda brand describes as "PepsiMojis." In the U.S., emojis will only be put on bottles. They will be used on Pepsi, Diet Pepsi and Pepsi Max.

At Story, features will include an interactive station that allows visitors to use the Pepsi emoji library to create patterns for t-shirts and smartphone cases. The station was created by YR Store, a London-based live design and print boutique. Other offerings at the store include cookies, fanny packs and glassware that use the PepsiMoji designs. 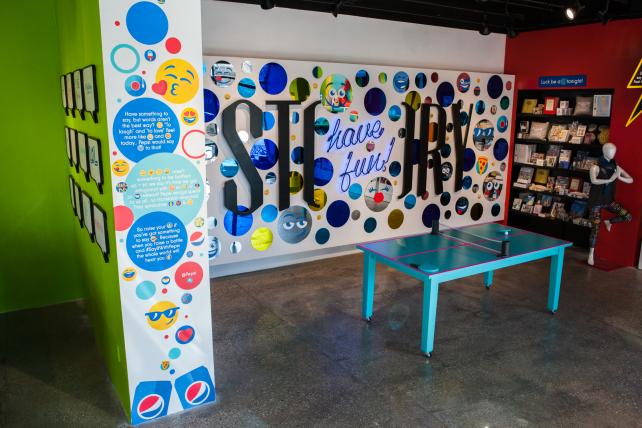 But Pepsi soda will not be on display, with the exception of possibly during a "happier hour" on Fridays when complementary food and drinks will be made available, said Story founder Rachel Shechtman. The soda-less merchandise is meant to "test this idea [of] can you market a brand without its marquee product there and have merchandise resonate," she said.

She has struck deals with the likes of American Express, Target and insurance marketer Cigna. The store overhauls its concept every four to six weeks. Brands use the store to attract attention but also as a "living lab" to test concepts, Ms. Shechtman said.

The store is also used to create branded content. American Express, for instance, used footage from events at the store to create marketing videos, Ms. Shechtman said. Cigna sponsored a concept at Story earlier this year called "Feel Good" that included a "virtual relaxation pod" that used Oculus Rift VR technology, according to a report in Women's Wear Daily.

"Cigna wanted to get some quantitative but primarily qualitative learnings from using retail as a channel because they are actually looking at getting involved in retail," Ms. Schechtman told Ad Age.

Each branded store concept averages about 50,000 to 80,000 visits over a four-week period, she said. When including earned media and social media, the concepts average about 50 million impressions, she added.

Non-Pepsi merchandise will include custom socks and linens designed by Kimberly Schlegel that "put a modern spin on linens through the addition of playful emojis," according to Story.

The PepsiMojis do not overtly use Pepsi branding. But people visiting the store will have no doubt that the cola giant is part of the effort. Images of two clinking Pepsi cans adorn one wall, for instance. Also, as store greeters inform visitors about the new concept, they will let them know that the store teamed up with Pepsi to bring emojis to life, Ms. Shechtman said.

Still, Story maintains some independence from brands. Ms. Shechtman compared it to a magazine, in which the merchandise in the store is the editorial content. But the presence of the sponsoring brands makes it more like an advertorial, she said. "Pepsi can't tell me what product to sell in the store ... because that's our editorial domain and it's how we use product as a storytelling tool."