PepsiCo: Focus on 'Consumer-Facing' Media Is Paying Off

PepsiCo says it is continuing to make progress, gaining value share in carbonated beverages and improving brand equity thanks to increased advertising. 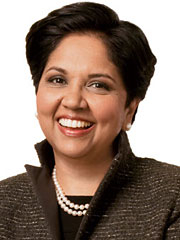 "From a brand perspective, we continue to increase the level of the effectiveness of our advertising through our global campaigns by directing more of our spending to consumer-facing media," said PepsiCo CEO Indra Nooyi, while cautioning that it typically takes a year for those types of investments to really bear fruit. Ms. Nooyi said the company will provide an update on brand equity scores when it reports fourth-quarter results.

Ms. Nooyi also said the company is making sure advertising money that had been handled by its bottling partners and joint-venture partners is "being deployed the right way." In reporting its second quarter results, PepsiCo said media spending jumped more than 40% in the U.S. during the second quarter, and more than 30% year-to-date.

"The fact we are doing a 360-degree activation, not just spending money on television advertising but in the digital world, executing better, doing the right promotions, all of that we are seeing is beginning to drive the brand equity scores into positive territory," Ms. Nooyi said.

Wall Street and the industry are closely watching the company for signs its plans to spend an incremental $500 million to $600 million on marketing are paying off.

"It is too early to determine whether the company will deploy all of its expected $500 to $600 million in incremental marketing spend and also too early to judge its effectiveness," wrote Kaumil Gajrawalain, an analyst with UBS, in a recent report. "In our view, the most important driver of Pepsi's turnaround strategy is the step up in marketing spending. According to Kantar Media, PepsiCo appears to be on track towards [its] goal, with measured advertising spend in the U.S. up 25% year-to-date vs. 2011, but still not back to 2008 levels."

PepsiCo "is a work in progress, and we think this shows movement towards more stable results," John Faucher, an analyst with JPMorgan Chase & Co in New York, said today in a note discussing PepsiCo's results.

Overall, the company said food and beverage trends softened during the third quarter, largely driven by trends in grocery. The non-carbonated portion of PepsiCo's portfolio took a hit, as the company made the "very painful decision" to not chase price in categories like bottled water. It also eliminated some unprofitable stock-keeping units in the juice drink category. On the food side of the business, Quaker Medleys was touted as a "break-through innovation" that contributed to a strong quarter for Quaker. And increased advertising behind mainstream Frito-Lay products was hailed as strengthening performance for that brand.

PepsiCo also telegraphed its plans in the energy drink category, which has been growing rapidly in recent years. "There's no question energy drinks took share from mainstream players," Ms. Nooyi said, noting that PepsiCo has some "interesting" launches planned for next year. "That's not a strategy that any of the big companies could have deployed and been successful at. So we're going to take a more responsible and a disciplined approach in energy going into next year."

Chief Financial Officer Hugh Johnston was quick to clarify that PepsiCo has no plans to "deploy significant mergers and acquisitions capital into the energy-drink category."

KFC puts its U.S. account into review, dealing a blow to Wieden+Kennedy Portland