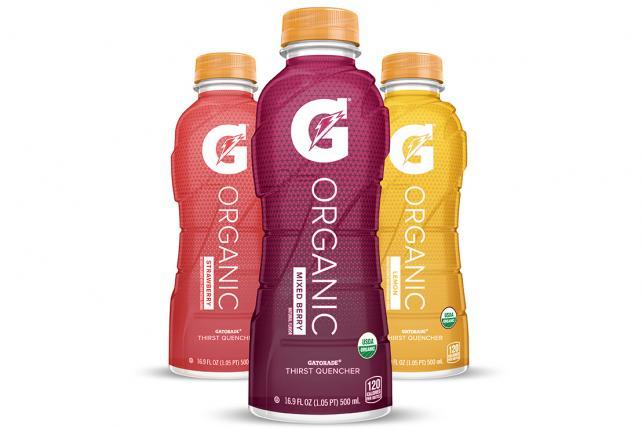 PepsiCo is introducing a version of Gatorade that's certified organic by the U.S. Department of Agriculture, testing whether a product created in a lab with artificial flavors and colors can adapt to America's growing natural-food movement.

After two years of research, the company is now selling strawberry, lemon and mixed berry G Organic in some Kroger supermarkets, said Brett O'Brien, Gatorade's senior VP and general manager. It plans to expand the rollout to select grocery, natural and convenience stores over the next few weeks. The suggested retail price for the new drinks is $1.69 for a 16.9-ounce bottle, 50 cents more than for Gatorade Thirst Quencher, the nonorganic equivalent.

Gatorade, which controls 70% of the sports-drink market, is facing increasing pressure from new challengers like coconut water as consumers are focused more than ever on ingredients. Organic food industry sales in the U.S. reached $43.3 billion in 2015, up 11% from the year before, while broader food sales gained 3%, according to the Organic Trade Association.

"We heard pretty loud through the locker rooms, through our work with nutritionists, that there is an interest and a desire among athletes to go organic," Mr. O'Brien said in an interview. "Somewhere around 10 to 12% of athletes are saying they're interested in purchasing organic products."

To be considered organic, the new Gatorade had to shed artificial ingredients and PepsiCo needed to refine its manufacturing. Every step of the process was approved by the USDA, which aims to ensure organic products are more natural and less harmful to the environment.

But the introduction of G Organic isn't without risk. PepsiCo recently faced a backlash after switching sweeteners in Diet Pepsi, forcing the company to reintroduce a version with aspartame less than a year after removing it. A brand extension of Gatorade -- which already includes low-calorie G2 -- could confuse consumers.

"In as much as they can focus on the potential to change ingredients without changing the taste, that's sort of a win-win," said Adam Fleck, a beverage analyst at Morningstar. "But you have to be very careful about alienating your current customers in a bid to attract lapsed customers or new customers."

G Organic, which has seven ingredients, is the first major sports drink to cater to food and beverage customers looking for fewer and more natural components.

Other types of consumer products have already shifted in that direction:

Gatorade is contending with a growing list of all-natural competitors that are taking aim at the brand's market dominance.

"While sports drinks are still the Michael Phelps of mass hydration, young upstarts like coconut water are taking advantage of health and wellness trends to make a run at the champion," Duane Stanford, editor-in-chief of Beverage Digest, said in an email.

Gatorade was developed in a lab at the University of Florida in 1965 after an assistant coach there asked researchers to look into why his football players -- the Gators -- were suffering from heat-related illnesses like dehydration.

A single-ingredient product like coconut water benefits from a lack of such engineering. The most difficult part of creating G Organic was getting the amount of electrolytes and carbohydrates to the levels of other Gatorade products without boosting calories, Mr. O'Brien said.

PepsiCo has previously dealt with pressure to change ingredients in Gatorade. It removed brominated vegetable oil from the sports drink after criticism on social media and online forums such as Change.org. Coca-Cola Co. made a similar move with Powerade.

But listening to consumer criticism doesn't always pay off. PepsiCo removed aspartame from Diet Pepsi in August 2015 only to reintroduce the original formula -- now called Diet Pepsi Classic Sweetener Blend -- in June. Diet Pepsi's sales volume fell 5.8% in 2015 and dropped about 11% at retail during the first quarter of 2016, according to Beverage Digest. The problem: Customers didn't like the taste of the sucralose-sweetened version.

G Organic will be sold at first only in single-serve bottles to give people a chance to taste the product, O'Brien said. It has 120 calories per single serving, about the same as in the flagship brand.

"There's that misnomer that if it's organic it can't taste good, and that's not the case," he said. "We're just trying to get people familiar with the product, what it means, what it does and try it. Once we've checked those boxes, we've got a big opportunity here."