Petsmart is returning to the Oscars this year to launch a brand push that likens "pethood" to parenthood. The pet-supply chain will break two 30-second spots Sunday night -- one during the broadcast and another during the red carpet pre-show -- directed by Christopher Guest and starring Anna Faris and Jennifer Coolidge.

The campaign, called "Petsmart Partners in Pethood," explores how having a pet can be similar to having a child -- from potty training to feeding, bathing to doctors visits. The goal is to have a little fun with its advertising and help Petsmart stand out in the crowded pet category.

"Most pet advertising focuses on images of happy pets running in fields," said Phil Bowman, exec VP-customer experience at Petsmart. "The focus of this campaign is how happy pets make their pet parents."

The spots showcase different types of pet parents, including new owners, overprotective parents and overly-competitives ones. In one ad, Anna Faris hosts a birthday party for her dog Stanley, who she insists loves mountains, leans toward eastern religions and is an Aquarius because of his creativity and stubbornness.

"As you watch the commercials you will see either yourself or someone you know in them," said Mr. Bowman. "They're entertaining but not off putting. We want to make sure that they're endearing and relatable."

GSD&M, based in Austin, Tex., created the campaign after being named Petsmart's creative shop last October. For the push, the agency took moments that every new parent experiences with their children, and then replaced the children with animals. The ads capture moments most pet parents can relate to, like taking a dog to be groomed and pet-proofing a home, sending the message that Petsmart is there to help every step of the way.

"Most people treat their pets like kids," said Jay Russell, chief creative officer at GSD&M. "As soon as we had that insight … it really was as simple as: What do you do with your kids? Alright, let's take the kid out and put a pet in there."

Mr. Guest -- with the production company GO Film, which is known for movies like "Best in Show" -- was tapped to direct the TV spots and online videos for his signature comedic style. His usual cast of characters will appear throughout the films, which were mostly improvised.

"There are very few people who do authentic humor in a cooler way than Christopher Guest," said Mr. Bowman. 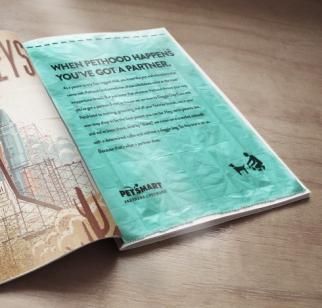 In addition to TV, the campaign features five roughly two-minute-long online videos, including extended cuts of the two Oscars spots, as well as print, digital and social media efforts.

The campaign also includes family-portrait-style images of real Petsmart consumers and employees with their pets that will be shared on all channels, as well as print ads. One ad that will run in People and Entertainment Weekly this spring features the brand's mission statement printed on a poop bag.

"I can't think of a better way to prove that Petsmart is your partner in pethood than by helping you pick up your pet's poop," said Mr. Russell.

GolinHarris handled public relations and social media for the push, OMD was the media firm and iCrossing worked on the search components.

Mr. Bowman declined to reveal the budget for the push but said the spend is in line with previous years. Petsmart spent nearly $105 million on U.S. measured-media in 2013, up from $94 million the previous year, according to Kantar Media.