READ THIS NEXT
Chipotle cosmetics are back, and Elmo cleans up for SC Johnson: Trending 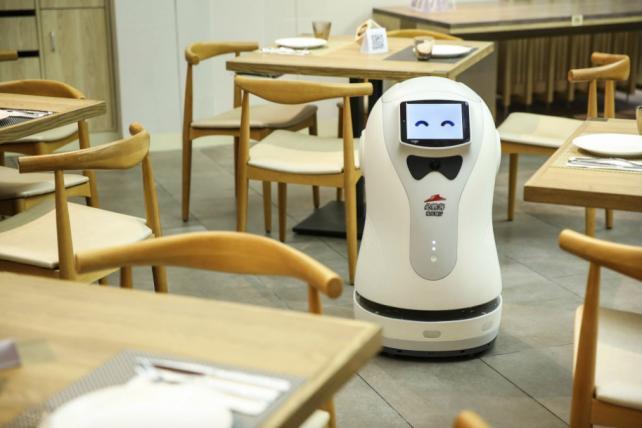 At Pizza Hut's new concept restaurant in Shanghai, a robot greets customers at the door and leads them to their table, rolling across the floor and beeping like R2-D2.

The restaurant is called ph+, and it's housed in the basement of the Shanghai Tower, the city's tallest building, which was just built and is still mostly empty. It's one of the first efforts to come from Yum China Holdings, now the China licensee for KFC, Pizza Hut and Taco Bell, which is soon to re-enter China. The company spun off from Louisville, Kentucky-based Yum Brands a month ago into a separately traded stock.

Yum was a pioneer in China, bringing Kentucky Fried Chicken to the mainland in 1987 and Pizza Hut in 1990. But its sales in recent years have been hurt by food safety scandals affecting KFC and by competition from local brands, which are quicker to react to trends.

The company, which has 7,300 restaurants with around 400,000 staff in China, also needs its brands to seem fresh to young consumers. Robots are one way to do that.

Restaurants staffed by robots are popping up elsewhere in Asia, including at Pizza Hut in other markets; in Shanghai, a KFC opened in May with robots taking orders. More generally, China's KFC stores have been revamped to look more stylish. Last year Yum also launched an upscale Italian restaurant called Atto Primo near Shanghai's waterfront, a lab for learning what higher-end consumers in China want.

Pizza Hut's new concept restaurant was quiet when Ad Age visited at dinner time the day after its opening. There were about a dozen customers and as many staff, including the robot, made by Yogo, a local robot maker. Staff say there are two robots, but one was charging when Ad Age visited.

The robot makes electronic beeping sounds and says a few words, like "follow me," as he leads guests to tables. He doesn't take orders or deliver food. Manohar Balivada, executive director for client strategy at The Silk Initiative, a brand strategy and insights consulting agency focused on food and beverage clients, said Pizza Hut likely wanted to be cautious on that front; he noted that a restaurant in the Chinese city of Guanzhou got rid of its robot waiters because they were clumsy.

The robots might lure in tourists going to the observation deck on the Shanghai Tower, the world's second tallest building, Mr. Balivada said. The restaurant is near the entrance for that. And the robots are something new in a country where consumers tend to seek novelty and are less loyal to brands.

"I always suggest to clients, 'you need to be visible, and constantly so, and you need to keep doing things that will make people sit up and take notice of what you're doing,'" Mr. Balivada said.

The restaurant has a table that works like a giant iPad, where customers can touch the screen to customize pizzas and other dishes. The décor feels more upscale, with natural woods, soft colors and porcelain vases, though prices are affordable for Western food at a sit-down restaurant in Shanghai. Spaghetti bolognese is $5.50, and tiramisu is about $3.20. People can settle the bill by mobile payment, including with Alibaba Group-affiliated Alipay. Alipay's parent company, Ant Financial Services Group, invested $50 million in Yum China in September.

KFC and Pizza Hut have worked hard to customize their brands to China's digital and e-commerce landscape. On Nov. 11, Alibaba's big annual sales day, a Pokemon Go-like augmented reality mobile game led people into locations such as KFC. People can also buy vouchers on an Alibaba shopping platform to get discounted chicken legs at KFC or better deals on Pizza Hut.

After a rough few years in China, sales had been picking up again at Yum restaurants, with four consecutive quarters of same-store sales growth -- until the most recent one. In the third quarter, stores open for at least a year logged a sales decline of 1%; for Pizza Hut's casual dining restaurants specifically, the figure was down 4%. Yum Brands said geopolitics played a role: It blamed protests against Western companies that broke out when an international tribune in the Hague rejected China's contention that it has historic rights over much of the South China Sea.