At the close of 2007, American citizens found themselves with a deepening credit-card debt of $972 billion. Although there might be multiple contributors to such debt, one likely cause is consumers' overspending. Consumers can, and often do, spend $88 for a Lacoste polo shirt when one of comparable quality can be garnered for half the price. And consumers can spend in excess of $300 on a Dualit toaster when $30 will produce one of similar, if not equal, functional value to most consumers.

Seasoned marketers and academics recognize that products are often sought for reasons beyond their pure functional qualities; their purchases fulfill a variety of psychological needs. In particular, products are sometimes purchased for their ability to compensate for psychological threats, a process that we call "compensatory consumption." Although our notion that consumer purchases can serve a compensatory function is not new, we have recently unearthed a previously unstudied form -- one that is fueled when consumers experience a lack of power or control.

Our argument rests on three assumptions: A) feeling powerless is often an aversive state that consumers seek to eliminate; B) status is one source of power; and C) consumers can compensate for feeling powerless by demonstrating or obtaining status. As a result, we reasoned that feeling powerless would lead consumers to pay more for products that carried, or were advertised as having, an association with status. 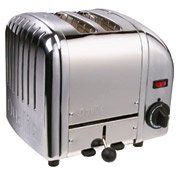 Going too far: Consumers can spend in excess of $300 on a Dualit toaster when $30 will buy one of similar, if not equal, functional value. That's because power threats are driving consumers to seek perceived status from expensive brands.
We tested this notion in a recent series of experiments, a portion of which recently appeared in the Journal of Consumer Research. In this work, we created differences in power through a variety of means. In some studies, individuals wrote about a time they experienced a lack of power, possessed power or went to the grocery store. In other studies, individuals were randomly assigned to be managers or a subordinates in an organizational simulation. Subsequently, as part of an ostensibly unrelated task, they expressed their desire or willingness to pay for various products. Despite the simplicity of our manipulations, results were clear and consequential.

In one experiment, consumers bid on products in a simulated online auction. Compared with high-power or base-line participants, low-power consumers placed higher reserve bids on products associated with status (silk ties, fur coats) but not for products unassociated with status (minivans, washers). Essentially, a temporary state of powerlessness changed consumers' spending habits such that they were willing to spend more to "buy power" by acquiring status-related products.

In another experiment, consumers negotiated for a framed picture of their university. When the picture was advertised to emphasize its status (in other words, advertised as rare and exclusive), a state of powerlessness led to a reservation price of $72.38, compared with an average reservation price of $44.21 among other groups. But when the status of the same product was not advertised, powerlessness did not increase consumers' reservation prices. An additional experiment found that differences in consumers' spending limits were driven by the belief that obtaining the status-related item would restore their lost sense of power. Only when consumers lacked power and products were associated with status were they willing to pay more for the same product.

WANTING TO BE SEEN

In a more recent experiment, we found that powerlessness creates a preference for displaying one's brands: A state of powerlessness led consumers to prefer clothing with extremely visible logos. In addition, recent work by economists has found differences in visible consumption of items such as clothing, jewelry and cars among different ethnic groups. Blacks and Hispanics devote a larger percentage of their income to visible consumption items than do comparable whites. All of these results -- ours and others' -- can all be interpreted as evidence that conspicuous consumption is designed to signal social status to compensate for being lower in the societal hierarchy.

Given that many situations often evoke feelings of being powerless -- from meeting with one's boss, defending a thesis or even a CEO dealing with a canceled flight on an airline with which he or she has no preferred status -- this form of compensatory consumption may be a ubiquitous phenomenon. Indeed, given that there are much stronger threats to power in consumers' everyday experience than in our experiment, our findings might be only a small indication of the magnitude of compensatory consumption.

We have recently created a full model for how one's place in a hierarchy affects consumption. Specifically, whereas being powerless orients individuals to what others think, feeling powerful focuses consumers on themselves. As a result, the powerful crave products that offer superior functionality and comfort -- products that will make a difference to them, not others. In one experiment, powerlessness led participants to have more interest in acquiring a Parker pen when it was framed in terms of status, whereas feeling powerful led to more interest in acquiring the same pen when it was framed in terms of performance. In a second experiment, when consumers were asked to generate slogans to accompany a BMW advertisement, the powerless were more likely to emphasize the status-conveying elements of BMW ("Prestige, it's yours"), whereas the powerful were more likely to emphasize the functionality and comfort of BMW ("Experience a smooth ride").

THE VALUE OF KNOWING YOUR CONSUMERS

So what does it all mean to you? Indeed, there are broad implications for brand managers and advertisers. The results speak to the merit of understanding the psychological motivations that drive consumers' consumption habits. Marketers must consider the psychological motivations present in a particular segment, and not just the physical attributes of a product. Focus groups should be a particularly valuable tool for discovering these underlying motivations.

By understanding the consumer, marketers can design and tailor brand positioning and advertising messages to be more responsive to and capitalize on consumers' needs. Indeed, the last set of experiments we described suggests that whether advertisers should emphasize status or performance depends on the target group's overall sense of power. Some brands already seem to be attuned to this. Mercedes, for example, has some advertisements that imply the status-conveying elements of the brand and other advertisements that discuss its comfort and functionality.

The finding that low-power consumers are drawn to status might raise an ethical dilemma for companies, especially given the racial differences in conspicuous consumption we mentioned. For the average citizen, compensating through spending on expensive items might only worsen their financial situation and contribute to Americans' growing credit-card debt. What's more, given the increased prices consumers are willing to pay, arguably, this gives marketers an unfair means of "extraction satisfaction" when it comes to setting prices.

Although knowing where to draw the line is its own debate, there is an uplifting side of understanding consumer threat and compensatory consumption: Responsible brands can strengthen relationships with consumers by acknowledging the persistent threats they face and helping them cope with the threats in a more appropriate manner -- but without promising to be the end solution. Dove's "Real Beauty" campaign, for example, not only creates a relationship with the consumer by recognizing the beauty challenges young women face, it also has developed a self-esteem fund. Such progressive approaches, leveraging consumers' psychological insights to strengthen relationships with them, may even work to eliminate or reduce the threat overall.