'How Many Ways Can You Snap, Crackle, Pop?' Brand Asks as It Makes Treats the Focus
READ THIS NEXT
Hyundai and BTS launch campaign to boost environmentalism 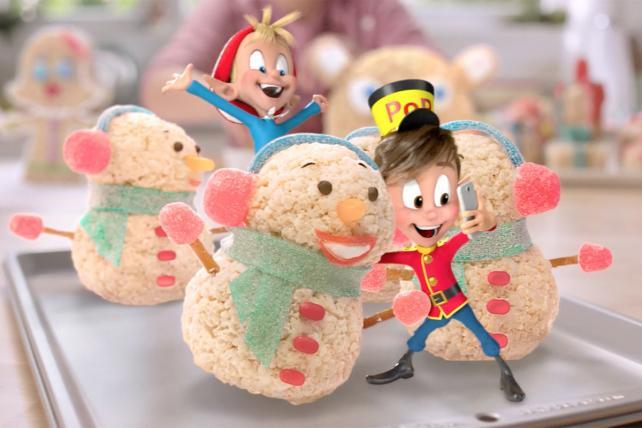 "How many ways can you Snap, Crackle, Pop?"

That's the question posed by Kellogg's Rice Krispies, which is bringing its famous characters off the box and onto the kitchen counter for a fresh spin on making Rice Krispies treats this holiday season.

The question is the new jingle from Rice Krispies and longtime agency Leo Burnett, which produced a new holiday treats-themed spot that started airing on Nov. 16.

The three characters appear to pop off the box and interact with treats including snowmen, turkeys, candy canes and a Christmas tree. In a blink-and-you'll-miss-it nod to current times, Pop takes a selfie with one of the snowmen treats and is photobombed by Crackle.

"This is really the first time that we've had them in a spot, in 3-D animation, interacting with live action people," said Brad Schwan, senior director of marketing at Kellogg.

These days, kids don't see the characters as often except on the box, and even that has changed as cereal faces tough competition at breakfast time from growing categories such as yogurt, bars and breakfast sandwiches. Kellogg has been working to promote its cereals for breakfast and for snacks or meals for other times of the day.

But many kids are familiar with Rice Krispies treats, which are made with the cereal, marshmallows and butter. People also use food coloring, chocolate chips, icing and other foods to enhance the treats. Hundreds of suggestions can be found on sites such as Pinterest, largely from consumers, though the brand weighs in as well.

"The consumer really loves making Rice Krispies treats all throughout the year but especially around the holidays; it's something that consumers do, and love, and love to share," said Mr. Schwan. He declined to say what percentage of sales the company believes are used for treat making, but called it "a substantial portion of the business."

Kellogg's holiday push extends into its products. This year's items include Rice Krispies Holiday Colors cereal, with red and green rice puffs mixed in, as well as Pop Tarts in sugar cookie and gingerbread flavors, and Pringles in flavors such as pecan pie.

Graham Woodall, lead Kellogg's account creative director at Leo Burnett, refers to Snap, Crackle and Pop as "the boys" and said the spot gives the characters a way to "really start to connect with a new generation in a really relevant way."

The "Endless Possibilities" campaign's bright, upbeat messaging is a departure from the brand's past holiday treat campaign, "Childhood is Calling," which had a more sentimental vibe.

"The reason we wanted to change it up was that we felt that today's modern family has a much more active, participatory relationship with their kids," said Mr. Woodall. He said Bent Image Lab worked on the animation and The Elements did the music for the spot.

Along with the commercial and print campaign, the holiday push includes asking consumers to post photos of their Rice Krispies treats with the hashtag #Treats4Toys. The brand will donate a toy through the Marine Toys for Tots Foundation for each of those posts. It has enlisted Jessica Siskin, who is known as Misterkrisp or mister_krisp on Instagram, to promote the #Treats4Toys plan.