Saved by the Max Sells Out With No Real Marketing

Tribute to 'Saved by the Bell' Began as Event, Turned Into Three-Month Pop-Up With Some Help From NBC
READ THIS NEXT
The Week Ahead: Delta reports earnings and ANA hosts data and analytics conference 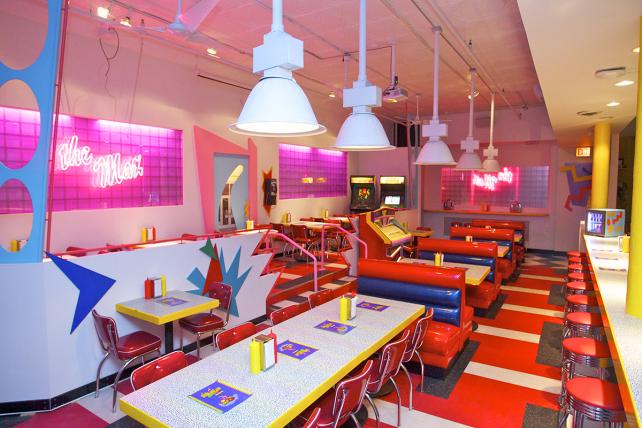 Saved by the Max can seat 87 at tables and booths that mimic those from the show, plus a bar. Photo credit: David Miller. 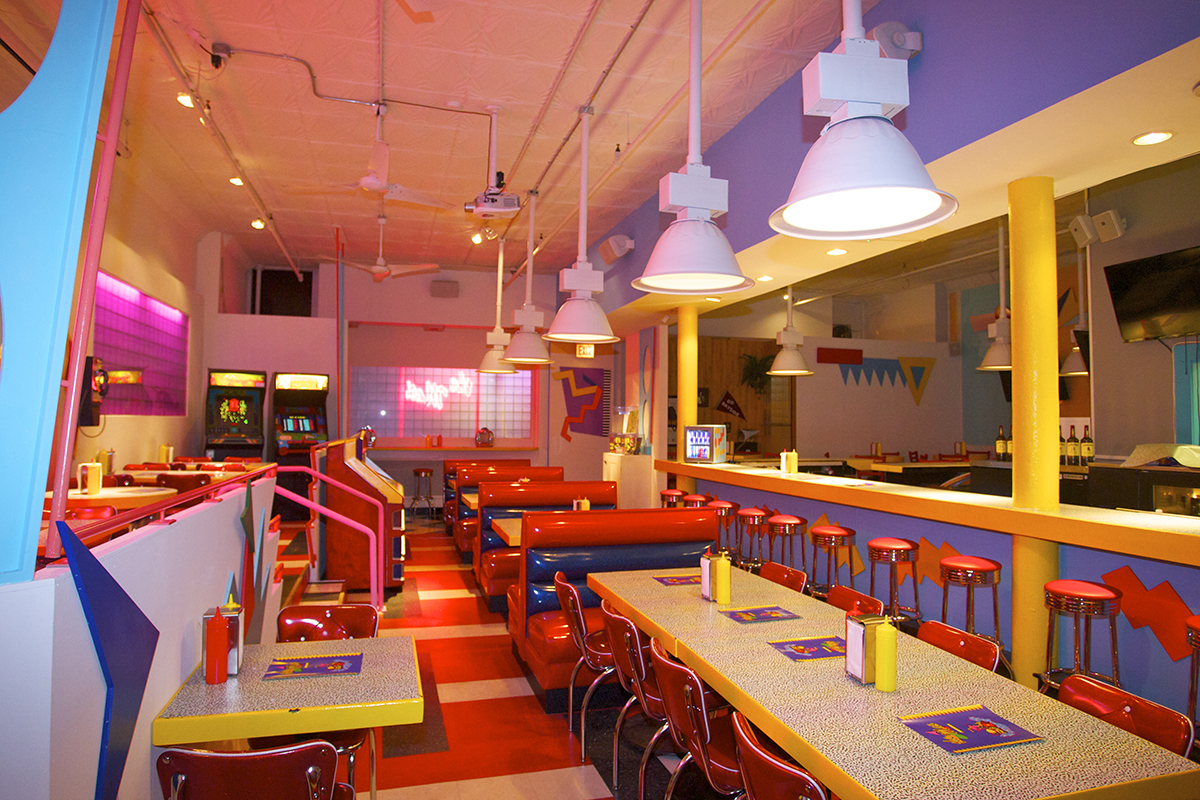 Dinner reservations for Saved by the Max sold out within minutes. The restaurant will take walk-ins during its brunch and late night hours, as well as some walk-ins for dinner. Photo credit: David Miller 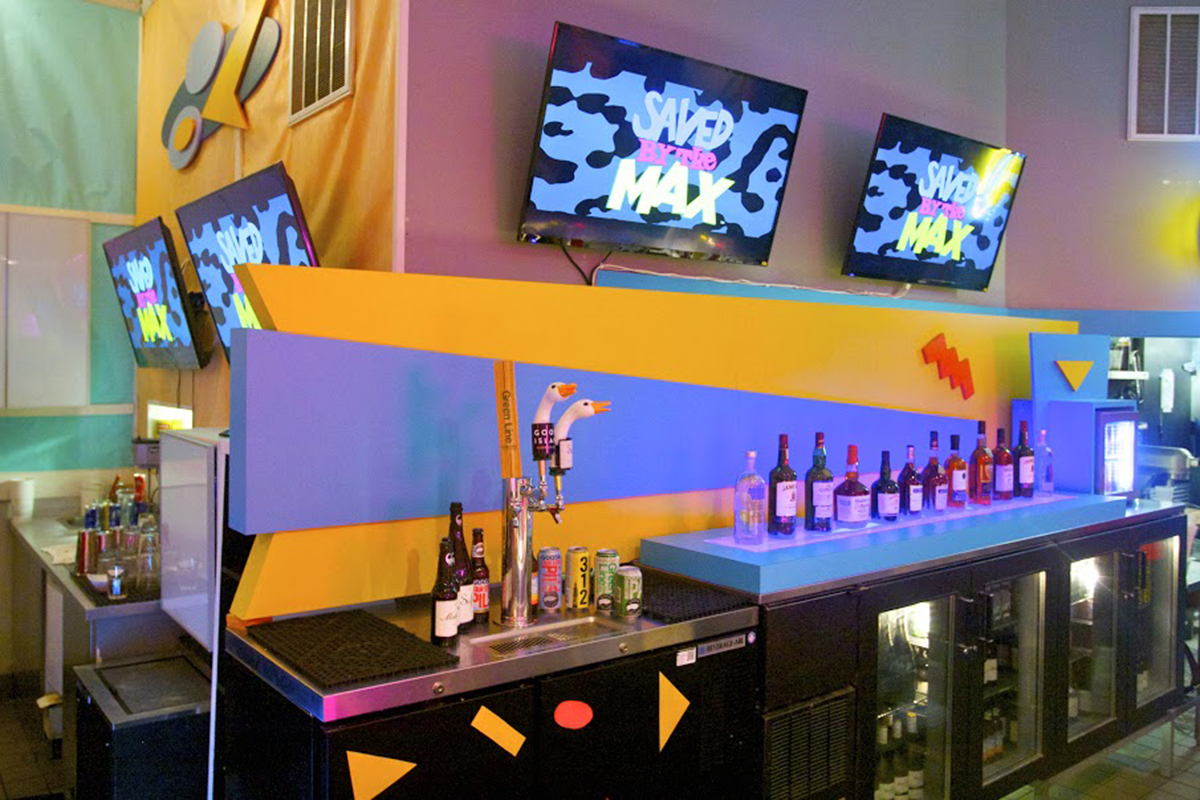 Saved By The Max recreates the diner from "Saved by the Bell" and added a bar with beers from local brewer Goose Island. Photo credit: David Miller. 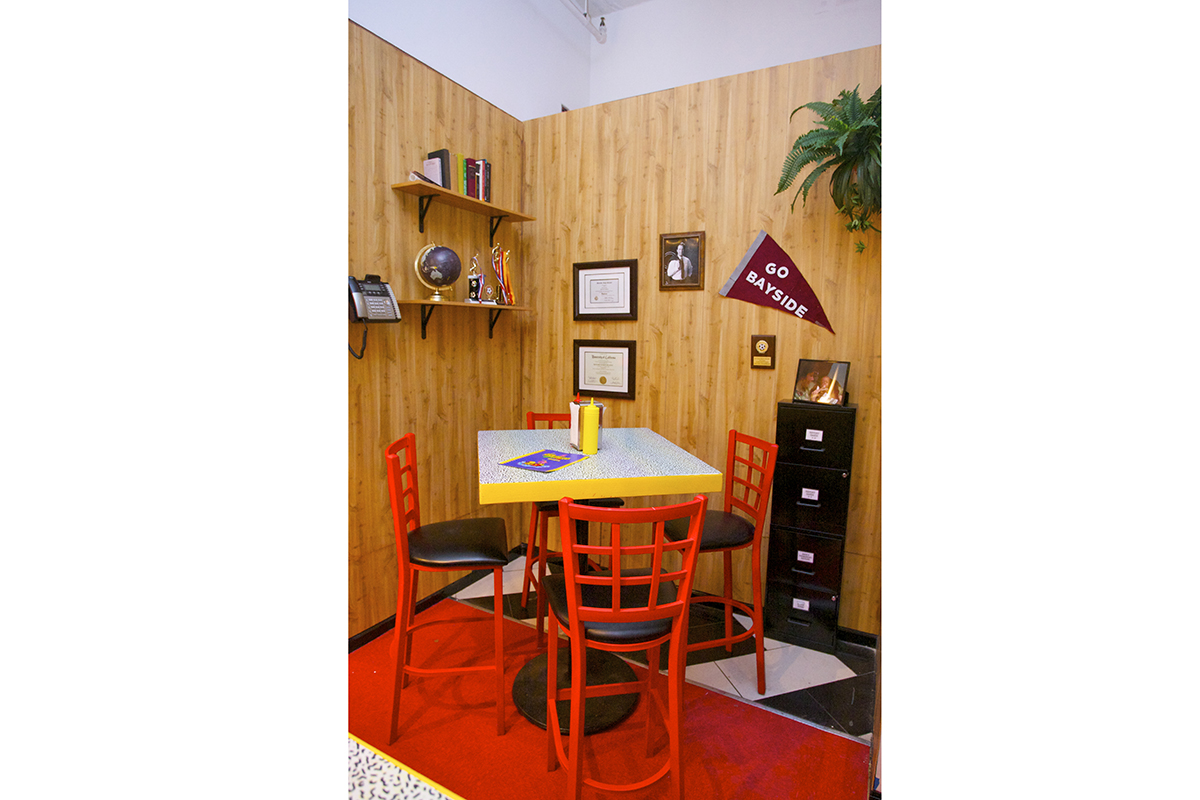 A small dining area off of the main room looks like the office of the show's longtime principal, Mr. Belding. Photo credit: David Miller. 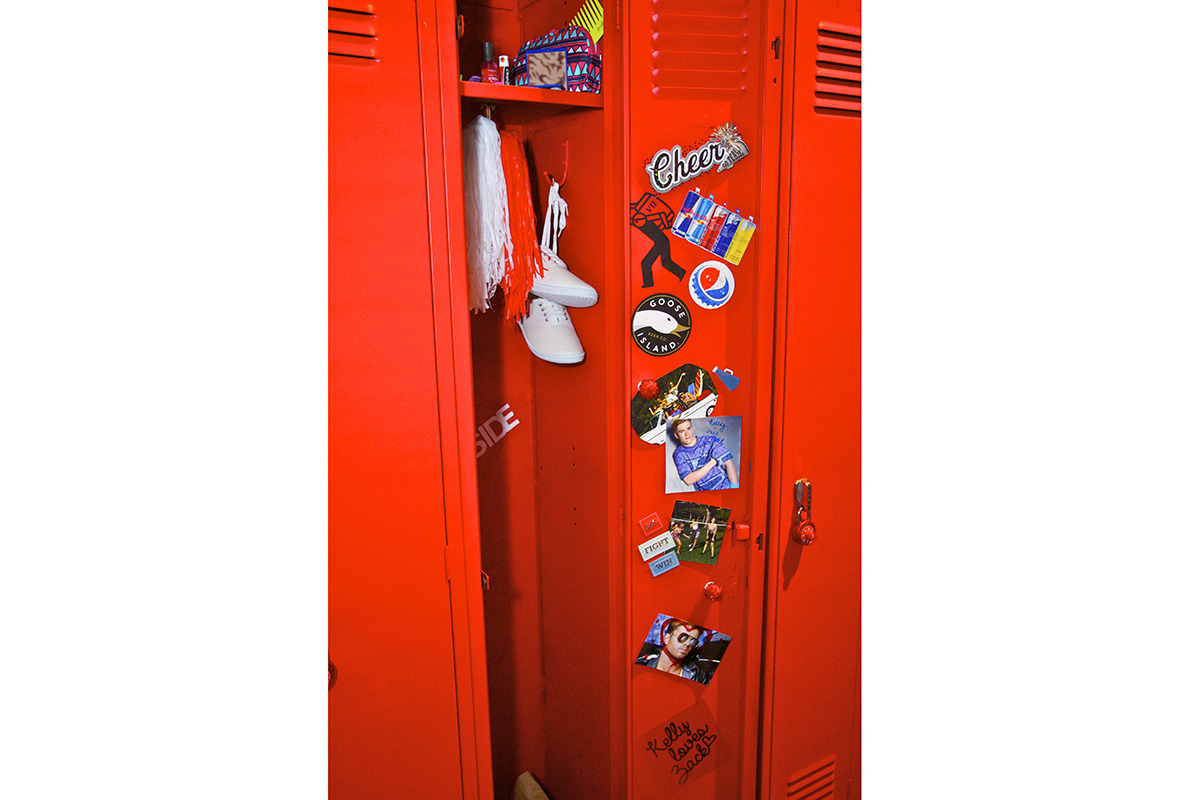 When guests walk into Saved By The Max they see a row of school lockers including one meant to recreate Kelly Kapowski's space with items including a picture of Zack and cheerleading gear, plus logos of brands represented in the restaurant. Photo credit: David Miller. 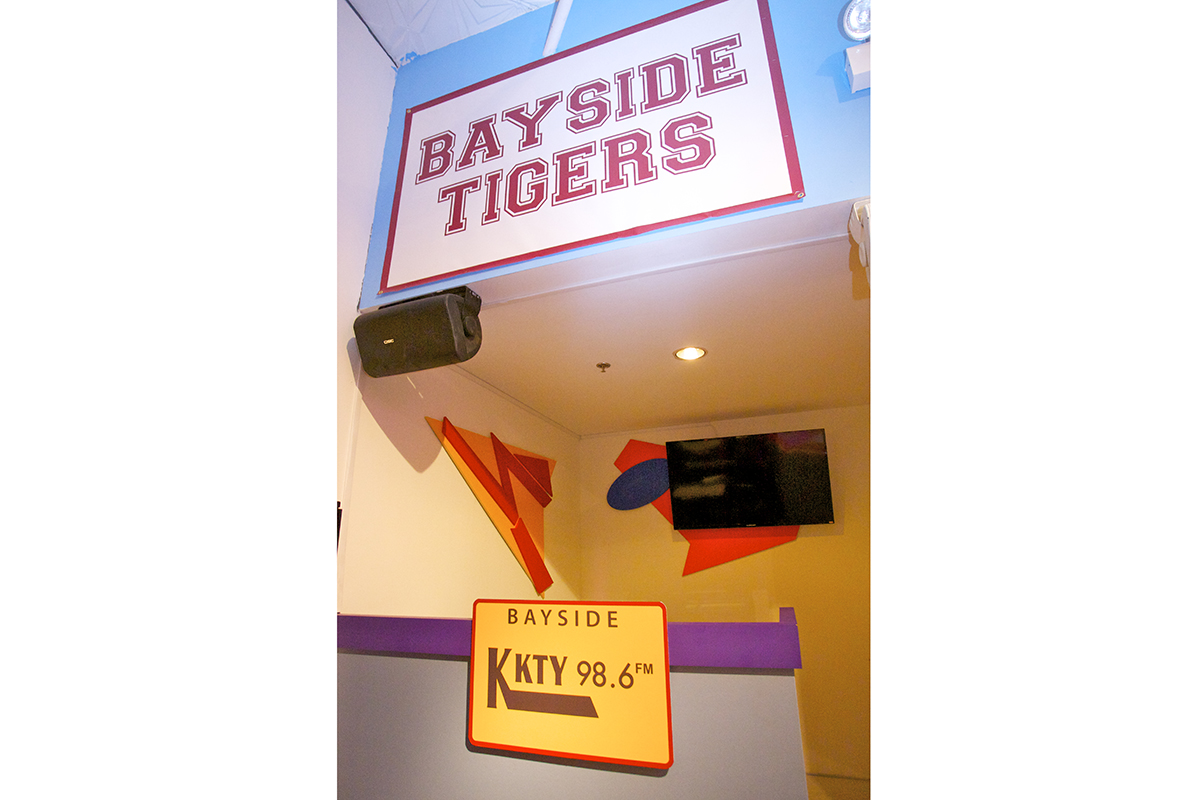 A DJ booth is in the restaurant, just like on the show, will be used for special events and has a table for six. Photo credit: David Miller. 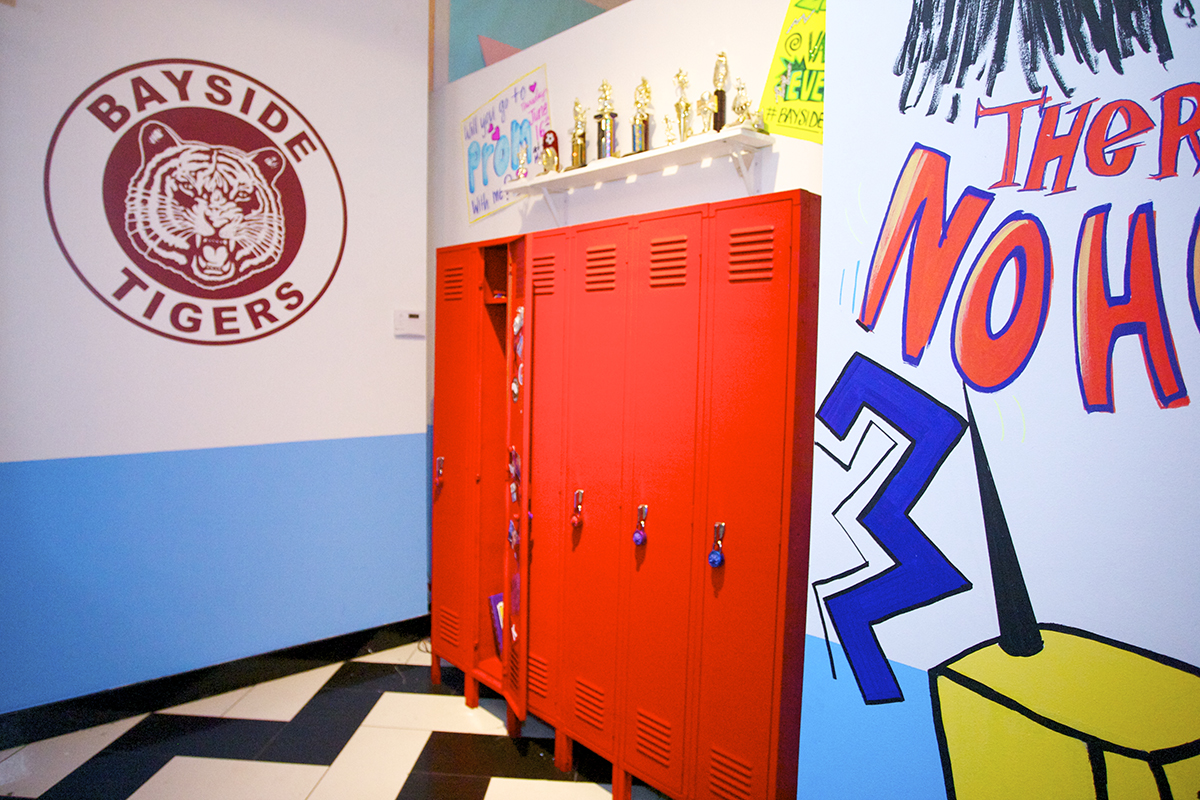 The entryway at Saved By The Max resembles a hallway at fictional Bayside High with lockers, trophies, signs that showcase upcoming events and sayings from the show. Photo credit: David Miller. 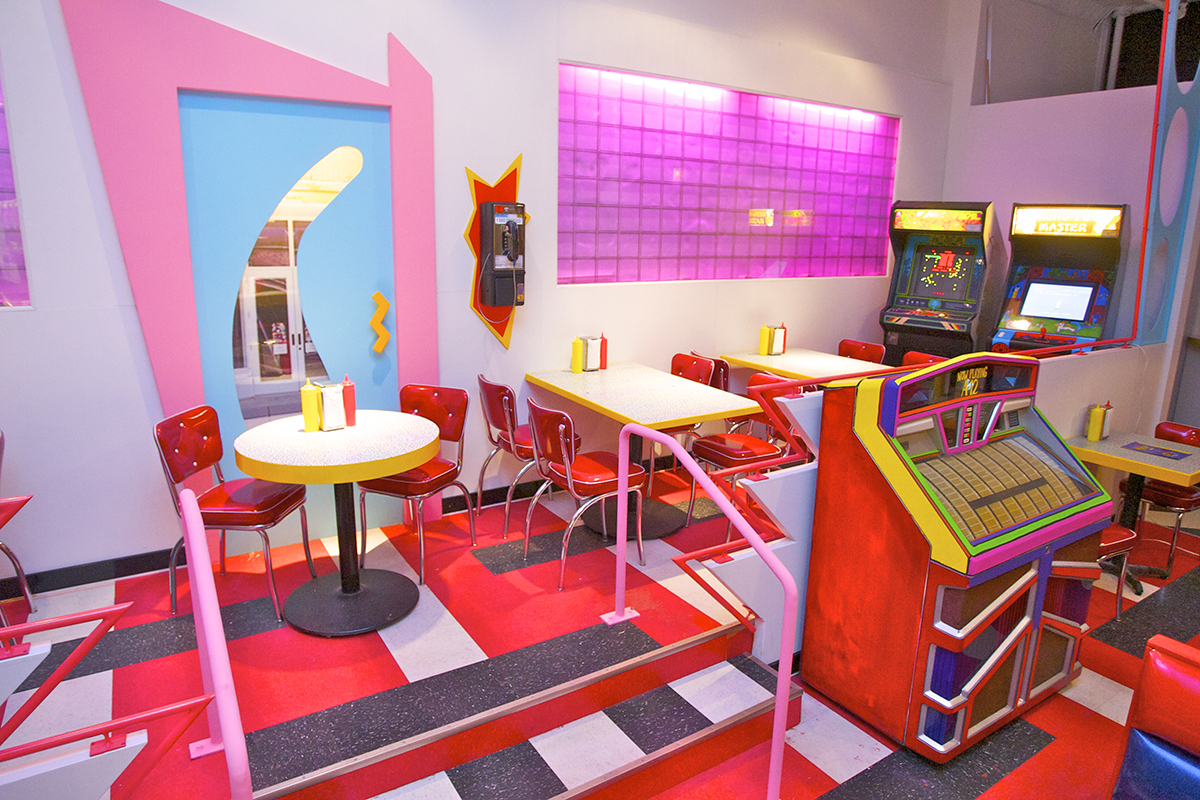 The main dining space mimics the diner seen on the show, with similar tables and chairs and a jukebox that says it is now playing A-12, Zack and Kelly's song. Photo credit: David Miller. 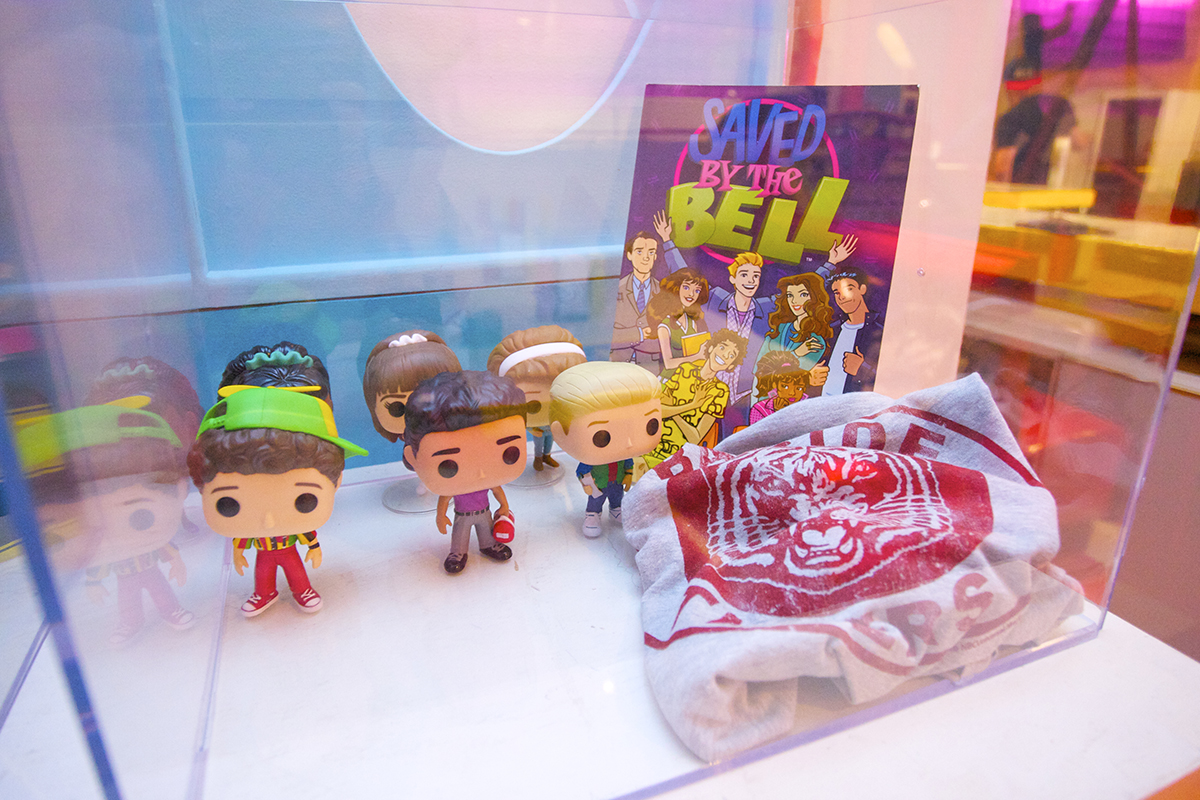 A case near the host station features collectibles such as figurines and a Bayside t-shirt. Photo credit: David Miller. 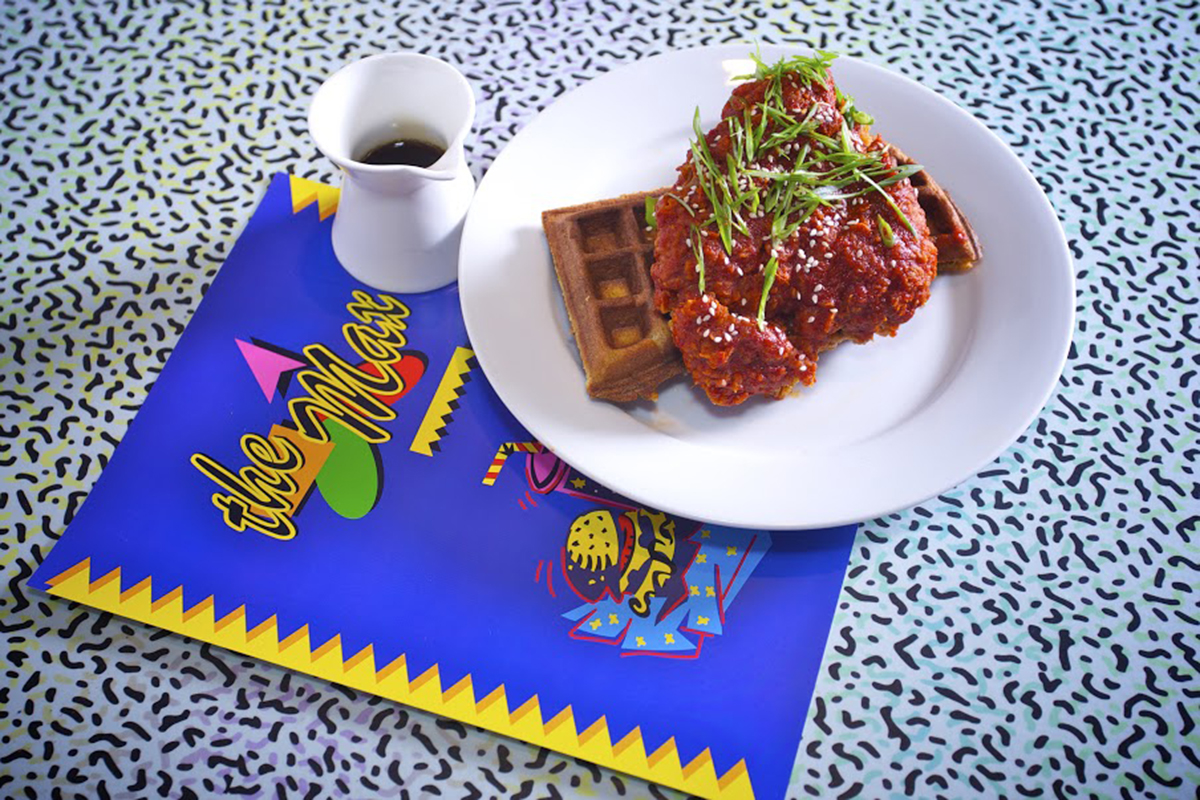 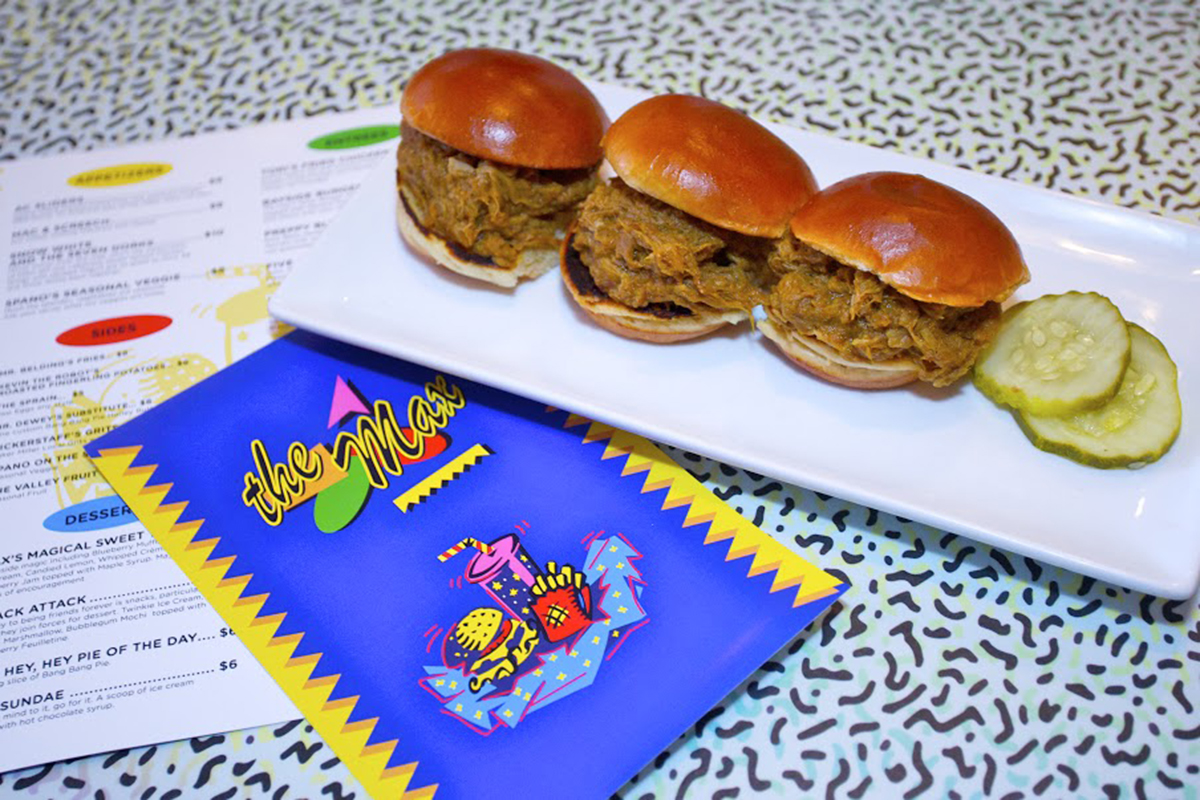 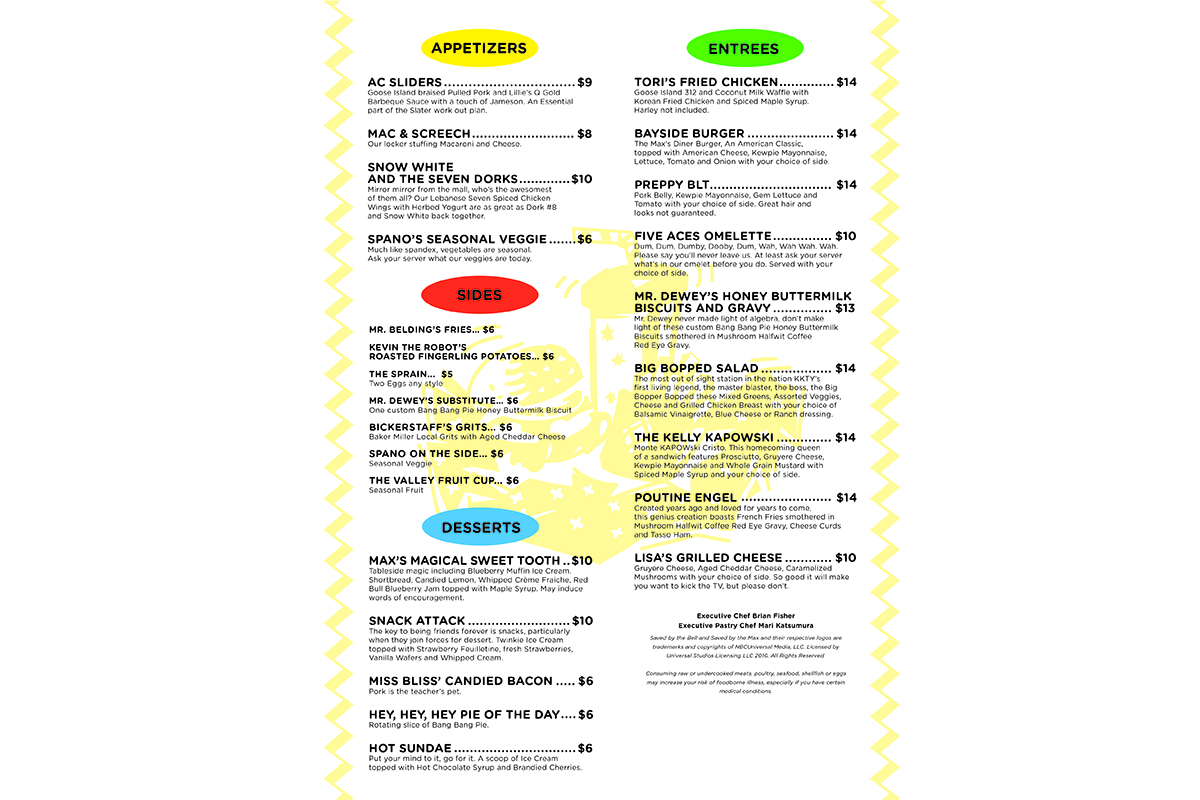 The team behind Saved By The Max came up with a mix of diner-inspired food with Executive Chef Brian Fisher. Photo credit: David Miller. 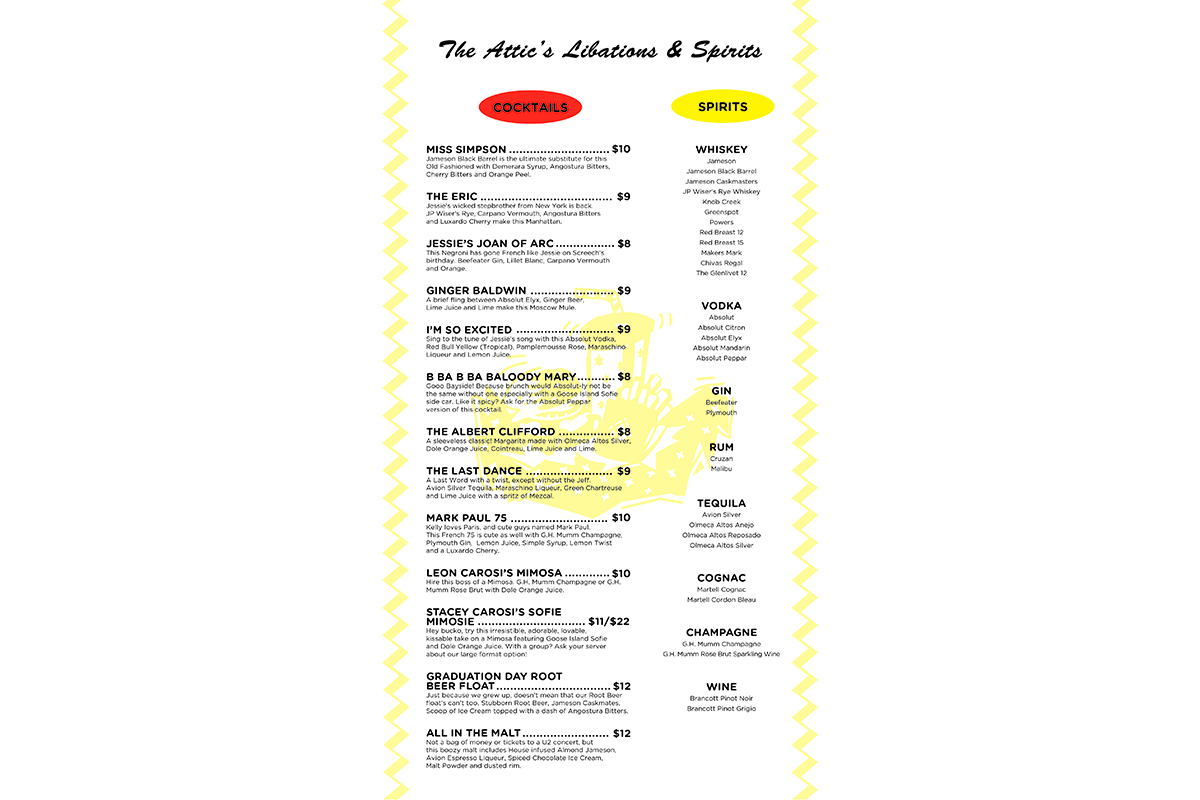 Drink names at Saved By The Max play on some well-known episodes and some lesser known characters. Two on the menu: I'm So Excited, which includes Red Bull Yellow to remind fans of Jessie's caffeine pills addiction, and Stacey Carosi's Sofie Mimosie, a mimosa made with Goose Island Sofie. Photo credit: David Miller.

"Saved by the Bell" still has such a following that a show-themed restaurant sold three months of reservation in minutes, with no traditional marketing.

Saved By The Max, which opened in Chicago's Wicker Park neighborhood in early June, was an idea cooked up by local promoter and events manager Derek Berry with his pals Zack Eastman and Steve Harris.

Earlier this year Mr. Berry set up an event page on Facebook, for free, for a pop-up based on the show, and that quickly got things rolling.

"We have not done any traditional marketing, which is baffling in a sense," Mr. Eastman said as he sat in one of the booths in the main space of the restaurant, which serves diner food and alcohol and can seat 87. "That Facebook event went viral, in a way, and everything else snowballed from there."

The restaurant itself, at 1941 W. North Ave., now promotes itself with neon pink signs that say "The Max." But there have been no paid ads, and until recently, there was not even a web site, just that events page on Facebook and later some Instagram posts.

The Facebook event page was the restaurant's landing page for weeks, and details were limited as the group sought to build anticipation -- and iron out the details, including the design and menu. Roughly 28,000 people have clicked on the page to say they are interested in the event.

Early on, the trio planned the project as a parody of the show based on the diner where characters such as Zack, Kelly, Slater and Jessie hung out. They soon heard from NBC, which became a partner in the restaurant. Messrs. Berry and Eastman said that NBC has been very supportive of the project.

Mr. Berry likened the idea of doing a parody and then getting NBC's assistance to being in a cover band, only to find yourself in the real thing. (And yes, a cover band comes in sometimes to play songs the Zack Attack band on the show also performed.)

The space recreates The Max, featuring red diner chairs, video games, a jukebox, a DJ booth and more. Extra touches can be found throughout the space. "Saved by the Bell" executive producer Peter Engel and Bennett Tramer, a writer and producer, sent an original menu from the fictitious diner, Mr. Eastman said. That menu is one of the items on display in cases near the host station. A dining section near the bar, without a view of the main area, was decorated to feel like Mr. Belding's office. Red lockers near the entryway give the space a Bayside High vibe.

Tying into the word of mouth marketing, the group is taking feedback from Facebook and elsewhere and incorporating it into the limited-run project. Comments on the Facebook page, such as possible names of menu items or the desire for a trivia night, have been implemented.

"We will have a fair amount of different cast members and people that worked on the show coming in," Mr. Eastman said. Ed Alonzo, who played Max and is a magician, has already stopped by to entertain patrons. Patrick Thomas O'Brien, who played math teacher Mr. Dewey, is also slated to appear.

Saved By The Max is not the first TV tribute pop-up. Nostalgia for "Friends" -- and that show's 20th anniversary -- led to a limited-time Central Perk coffee shop in 2014 that was pulled together by Eight O'Clock Coffee and Warner Brothers.

The team behind Saved By The Max points out on menus, its web site and elsewhere that "Saved by the Bell" and Saved by the Max and their respective logos are trademarks and copyrights of NBCUniversal Media LLC and are licensed by Universal Studios Licensing LLC.

"Because of them we were able to make this what it is," Mr. Eastman said, pointing out details such as getting the design of "The Max" in signs and on servers' t-shirts just right, as well as the design of the door the characters used to walk through. "We want to do it right. We are representing them in a lot of ways."

Still, the project is largely driven by the Chicago trio and their friends and partners. The two arcade games in the corner of the restaurant were rented from

The first few days, people lined up hoping to get the walk-in spots. Eddie Torres, 35, stood outside in his Kelly Kapowski t-shirt about an hour before the restaurant opened on June 2 after leaving on opening night when he thought the line was too long. He said a friend got reservations for July, but he did not want to wait. "Our reservations aren't for another month, but I want to get in here as soon as possible."

For now, the restaurant is set to be open through August, though fans have been asking whether it will stay open longer. "I think we all would love to see it extend further," Mr. Eastman said.