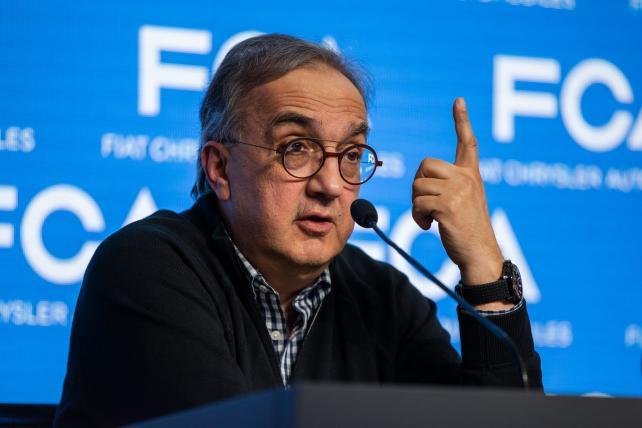 Sergio Marchionne during a news conference following the presentation of the companies five-year plan at the Balocco test track near Turin, Italy, on Friday, June 1, 2018
Credit: Federico Bernini/Bloomberg

Sergio Marchionne, the man in black and self-proclaimed fixer who plucked Chrysler from the ashes of bankruptcy in 2009 and hitched it to Fiat to create a money-making global automaker, has died, according to a statement from Fiat Chrysler Chairman John Elkann. He was 66.

"Unfortunately, what we feared has come to pass. Sergio Marchionne, man and friend, is gone," Elkann said in the statement issued by Exor, the holding company for the controlling Agnelli family.

Marchionne became gravely ill after what the company has called shoulder surgery, forcing him to be replaced as CEO of Fiat Chrysler Automobiles on July 21. The company appointed Mike Manley, 54, head of the automaker's Jeep and Ram brands, as Marchionne's successor. Manley is expected to make public comments to analysts this morning when FCA releases its second-quarter earnings reported.

"I believe that the best way to honor his memory is to build on the legacy he left us, continuing to develop the human values of responsibility and openness of which he was the most ardent champion," Elkann's statement said.

"My family and I will be forever grateful for what he has done. Our thoughts are with Manuela, and his sons Alessio and Tyler. I would ask again everyone to respect the privacy of Sergio's family."

Marchionne was already beginning to wind down a remarkable career -- he telegraphed well in advance that he planned to retire as CEO of Fiat Chrysler Automobiles in April 2019, after the conclusion of the company's 2014-18 business plan.

It was an improbable career that saw a young Italian immigrant in Canada go to college, become an accountant and, years later, arrive seemingly out of nowhere in European corporate circles to first save Fiat Group and later use Chrysler's strengths in light trucks to forge the combined Italian-American company into a true global automaker.

Concerns over Marchionne's medical condition rippled through the company for weeks. Corporate directors called a meeting in Italy on July 21 to determine his successor.

Marchionne, a workaholic who often slept on a sofa aboard a plane as he traveled regularly to steer Fiat Chrysler, was a heavy smoker and espresso drinker until quitting both about a year ago. In his last public appearance, on June 26, Marchionne, appeared fatigued and out of breath as he presented a Jeep Wrangler to Italy's paramilitary police, the Carabinieri, at a ceremony in Rome.

Marchionne captivated the global auto industry over the last decade with his candid assessments, tireless competitive spirit, remarkable transparency and multiple roles: chairman and CEO of Fiat Chrysler Automobiles, chairman and CEO of Ferrari, chairman of Maserati, and chairman of CNH Industrial, a European producer of trucks, buses, tractors and construction vehicles.

Marchionne was born in postwar Italy, where both his grandfather and uncle were killed in the fighting. He lived in Italy until emigrating with his family to Toronto at age 14. He studied philosophy and other subjects at Canadian colleges and received master of business administration and law degrees before becoming an accountant and rising through management ranks at several Canadian businesses. He was recognized as an accountant, tax specialist, attorney and business strategist.

But it was in the automotive world where Marchionne rose to larger-than-life fame, regularly crisscrossing the globe, brandishing multiple cellular devices at a time and dressing almost constantly in black -- a life practice he said he adopted to save several seconds of decision-making every morning.

While he was perhaps the most provocative executive to steer Chrysler since Lee Iacocca retired in the early 1990s, Marchionne preferred a tiny office in a wing of FCA's vast technical center in a Detroit suburb, where he could regularly confab with engineers, marketing executives and product planners.

Marchionne did what many pundits said was improbable: He resuscitated not just one failing automaker but two. He returned America's perennial underdog and No. 3 automaker, Chrysler, to profitability by uniting it through a complex merger with Fiat -- an Italian company that seemed incapable of penetrating the U.S. market.

"What I found was ... a company that had been run by a foreign entity for a long period of time, that had taken all of its wares on the way out," Marchionne said of his early days steering Chrysler in an address at the Brookings Institution in May 2014. "In 2006-2007, it had been flipped over to financially competent — but industrially incompetent — private equity investors who had run it for a period of time and then run into a brick wall in a crisis. What we ended up looking at [when Fiat arrived] was empty cupboards in terms of technology and product. And so we started from scratch."

Fiat was also on the brink of death in June 2004 when Marchionne was recruited by the company's controlling Agnelli family to sort things out. Fiat suffered a loss of approximately $2.5 billion on its core auto operations the same year. Many analysts expected it to simply exit the auto business.

Marchionne, who had moved to Europe at the time, had gained the Agnellis' notice by pulling storied old Swiss quality-assurance firm SGS back from near-collapse as CEO. Given control of Fiat, he negotiated an over $2 billion payment by General Motors to settle past contractual obligations with Fiat. He closed inefficient factories and restructured debt. Then he focused on expanding Fiat's product line, investing 10 billion euros to develop 20 new models in four years.

The turnaround made Fiat a cash-rich player by the end of the decade, just as the economic crash of 2008 hit the United States and battered the auto industry.

Marchionne in 2009 led Fiat to acquire a 20 percent stake in Chrysler, with a UAW pension trust owning 55 percent, and the U.S. and Canadian governments controlling minority stakes.

More important, as Marchionne took control of the Detroit automaker, the government-managed arrangement allowed Chrysler to quickly emerge from bankruptcy with $6.6 billion in high-interest government financing. Marchionne's strategy for returning Chrysler to profitability was to invest in new products, with Fiat and Chrysler sharing vehicles, engines and factories.

His first priority was to get the company healthy enough again to enter the private capital markets and shed its high-interest government debt.

By May 2011, he could count that as the first of many goals he would accomplish.

Ram was spun off from the large Dodge division. Younger Chrysler executives replaced veterans and were handed ambitious sales and financial targets but with autonomy to reach them. The Jeep lineup was nourished and expanded globally. Chrysler's American roots -- "Imported from Detroit" -- were played up in advertising that drew plaudits from dealers, employees and many consumers.

Within months of taking control of Chrysler, Marchionne met with dealers in Las Vegas. He made the first of what he called "a promise for a promise" that called for Fiat Chrysler to invest in and improve products if dealers agreed to invest in stores and embrace best operating practices with customers.

By 2014, Fiat had gained full ownership of Chrysler, but Marchionne's original plan to expand products and restore profits at Fiat Chrysler was thwarted by changing consumer preferences. The outlook for new, small fuel-efficient cars in 2009 and 2010 -- inspiring Marchionne's hopes to sell Fiats in America again -- began to wane, overtaken by rising pickup, SUV and crossover sales as the American economy recovered and new-vehicle demand rose to new highs.

For all his brilliance, iconoclast drive and opportunistic ways, Marchionne's sometimes blunt tongue also tainted the company's performance and outlook at times.

In 2011, when he complained about the U.S. government's "shyster" interest rates on FCA's bailout loans, Marchionne was forced to apologize the next day. He once described the former Jeep Commander "unfit for human consumption" while some of the large SUVs remained for sale in dealership showrooms.

And in the final days of the Obama administration, when the EPA alleged that FCA had undeclared emissions software on EcoDiesel-equipped Ram pickups and Jeep Grand Cherokee SUVs, Marchionne angrily protested. His steadfast denials likely factored into delayed certification of the 2017 Ram 1500 EcoDiesel and difficulty winning approval for other profitable light trucks equipped with the engine.

And in 2015, Marchionne clashed with UAW leaders over Fiat Chrysler's widespread hiring of lower-paid U.S. factory workers and a proposal to scrap a controversial two-tier wage scale by phasing out the top wage rate as longtime union employees retired.

Still, both sides of the FCA house largely prospered under Marchionne. In May, Marchionne told FCA shareholders that he expects the company to deliver adjusted earnings before interest and taxes of between $15 billion and $18.7 billion [13 billion and 16 billion euros] in 2022, up from $7.7 billion [6.6 billion euros] in 2017. The company's new five-year business plan, he said, will see operating margins rise to between 9 and 11 percent, compared with 6.3 percent last year.

Marchionne surprised the auto industry three years ago by laying out a thought-provoking vision for the global business in a presentation called "Confessions of a Capital Junkie." Marchionne complained that the auto industry generates a low return on capital in large part because each automaker incurs the same high expenses of investing in r&d and capital costs to develop the same products and technologies and achieve the same results.

The New York Times called him "Detroit's chief instigator" and an obsessive "automotive Cassandra" after Marchionne warned of disastrous consequences if automakers continued with unbridled spending.

"It is absolutely clear that the amount of capital waste that's going on in this industry is something that certainly requires remedy," Marchionne said in an April 2015 earnings conference call that stunned Wall Street analysts. "A remedy in our view is through consolidation."

"It's fundamentally immoral to allow for that waste to continue unchecked," Marchionne later told The Times.

In calling for more industry consolidation, Marchionne even proposed a merger or acquisition with FCA.

The appeal was roundly rebuffed by his two chief domestic competitors, Ford Motor Co. and General Motors, and prompted him to refocus FCA inward, to "get our own house in order."

He moved boldly. Predicting that U.S. consumer demand had permanently shifted away from cars in favor of light trucks, he recast FCA's product and manufacturing portfolio to answer the challenge, killing the slow-selling Dodge Dart and Chrysler 200 sedans to make room for more domestically produced Jeep and Ram vehicles.

Though he was criticized frequently for failing to follow industry trends, Marchionne preferred instead a slower, less-expensive approach of partnering with others to satisfy needs for electrification and autonomous driving. FCA partnered with Waymo to bring early-stage autonomous driving to the Pacifica hybrid minivan, for example.

Fiat Chrysler's newly released five-year plan will see the company invest $10.5 billion to develop new electric and hybrid vehicles. Yet, as Marchionne prepared to cede control of the global automaker he largely built from discarded scraps, he remained focused on two goals: freeing FCA from its burden of having more debt on its books than cash, and using Jeep and Alfa Romeo to drive global profitability to levels that would rival or surpass those of larger global automakers.

Lindsay Chappell is a reporter for Automotive News. Larry Vellequette of Automotive news contributed to this report.

Lindsay Chappell
View all articles by this author